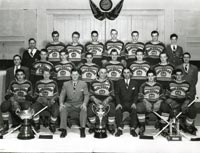 It was in the late 1800’s that local businessman and sportsmen Mr. John Earls decided to form a new athletic club in downtown Toronto. The name he chose was “The Toronto Marlborough Athletic Club”.

Mr. Earls will indeed go down in history as the “Father” of Marlboro hockey. He could never have imagined at the time what a storied franchise his new club would become.

The club was named after a long line of English Noblemen, the Dukes of Marlborough. The Dukes family name was Churchill, and in fact, the VIII Duke of Marlborough was an uncle to the legendary British Prime Minister Sir Winston Churchill.

Through the years the Churchill name had become synonymous with leadership, courage and their ability to rise to the challenge in times of adversity. In short, the Churchills provided the perfect role model for the young club.

It was then club secretary Fred Waghorne who wrote to the IX Duke of Marlborough, Charles Spencer-Churchill, in England, for permission to use the storied name and crest.

In choosing its logo the club took the Marlborough family crown and added the initials “A.C.” for Athletic Club. It wasn’t until the late 1950’s that the crown was set against the present day Maple Leaf.

This historical background of the name also lead to its teams being nicknamed “The Dukes”.

There is concrete evidence of the club having participated in baseball, football, lacrosse and boxing dating back to the late 1880’s. An article in the April 23, 1888 edition of the Globe and Mail shows the football schedule for the upcoming weekend including the Marlboro entry in the Toronto Junior Football League.

At the time The Marlboro Athletic Club maintained its headquarters in an office at 192 Spadina Avenue in Downtown Toronto.

As was common with athletic clubs of that era the Marlboro players were “multi-sport athletes” with the same faces competing for the club in several sports on the athletic calendar.

In the late 1890’s organized hockey was a loosely organized affair. For young players of the time actual games were limited to one off challenges between neighbouring churches and schools.

The one exception was the Toronto Lacrosse Hockey League. While the league operated three divisions of competition – Senior men’s (Open), Intermediate (Open) and Junior (18 and under) it would be the latter category that the first ever Marlboro hockey team would be entered in the 1899-1900 season. With players ranging from 14 – 18 years old it was not only the beginning of the clubs illustrious history, but its first ever “minor” team as well.

Hockey season in those days would start in late December or early January. All the ice surfaces, including those indoors, were made of natural ice and depended heavily on the weather conditions of the day.

The Dukes went on to win the Junior Division of the Toronto Lacrosse Hockey league in 1900 – 1901 in what would be the beginnings of a mini dynasty for the young club.

The following season the Marlboros entered both Junior and Senior teams in the Toronto Lacrosse Hockey League with the 1901 – 1902 Senior’s emerging victorious at season’s end.

In 1902 – 1903 the club entered a Junior team in the much stronger OHA for the first time and walked away with the crown, defeating Kingston in that initial championship final. The club also entered an intermediate team in the OHA, winning the Toronto area group before losing in the provincial finals. 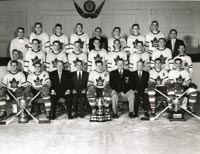 These titles were followed up with Senior OHA championships in 1903 – 1904 and 1904 – 1905. The former having moved on challenge the famed “Ottawa Silver Seven” for the Stanley Cup, losing in a two game total goal series, while the latter defeated Smiths Falls for the provincial title the next year.

Also of note during these early years was the Marlboros entering a Junior team in the first ever incarnation of the Toronto Hockey League (THL) in 1901. The league was the predecessor of today’s GTHL.

The first ever game in the new league saw the Marlboros defeat the Toronto Lorne’s 6-1 in a match played at Varsity Arena.

While the club continued to operate both Junior, Intermediate and Senior teams in the early 1900’s it wasn’t until 1927 that the Marlboro name really came to the fore.

It was during this year that the late Conn Smythe bought the N.H.L.’s “Toronto St. Pats” and changed their name to the now famous “Maple Leafs”. Smythe realized the importance of a strong farm system and eventually made the Marlboros part of the Leaf organization.

In the beginning both the Leafs and Marlboros practiced and were headquartered out of the old Ravina Gardens in Toronto’s west end. Their games were played downtown at the Mutual Street Arena.

The 1929 season saw the Marlboro Juniors win their first Memorial Cup. Before the juniors were disbanded following the 1988-89 season, the club would have won a record seven Memorial Cups (Canadian Junior Champions) and have sent in excess of 250 players and coaches to the N.H.L. ranks. 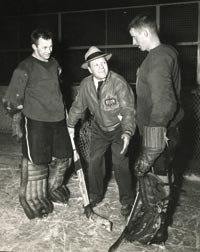 With minor hockey starting to become a more organized affair and the Toronto Hockey league (THL) now offering competition in four older age groups the Marlboros entered a Bantam team for the 1931-32 season. This coincided with the opening of the new “Maple Leaf Gardens” where the Bantams would practice in the early morning before school. That pioneer team captured the THL Bantam crown and went on to win the Midget “A” title the next year. The early years would often see the young Marlboro clubs practicing and playing on local outdoor rinks with natural ice, as long as Mother Nature co-operated!

After an unexplained absence from competition for an eight year period between the 1933 – 1934 and 1940 – 1941 seasons the club added a Minor Bantam team to complement the existing Bantam and Midget teams. Seven years later in 1948-49 the Pee Wee team made its first appearance. Sponsored by the “Shopsy’s Food Company” that year the Pee Wee’s went on to win 8 THL championships in the next 14 years.

Up until the N.H.L. instituted the present entry draft in 1967 the Maple Leaf organization through its Marlborough minor system could virtually groom players from as young as nine years old to work their way through the minor system, to the Junior “A’s” and ultimately to the Leafs. Needless to say, this process laid the foundation for many Leaf Stanley Cup teams and produced a long line of legends ranging from Joe Primeau and Busher Jackson in the 1930’s, to “Hockey Night in Canada’s” Frank Selke Jr. in the 1940’s, Bob Pulford, Bob Nevin, Carl Brewer and Billy Harris in the very successful 1960’s, and players such as Mike Palmateer and Mark Napier in the 1970’s.

Following the disbanding of the Junior “A’s” in 1989 the Maple Leafs discontinued it’s direct sponsorship of the minor system, but through the permission of then Maple Leaf owner Harold Ballard the Minors were allowed to retain and carry on the Marlborough name.