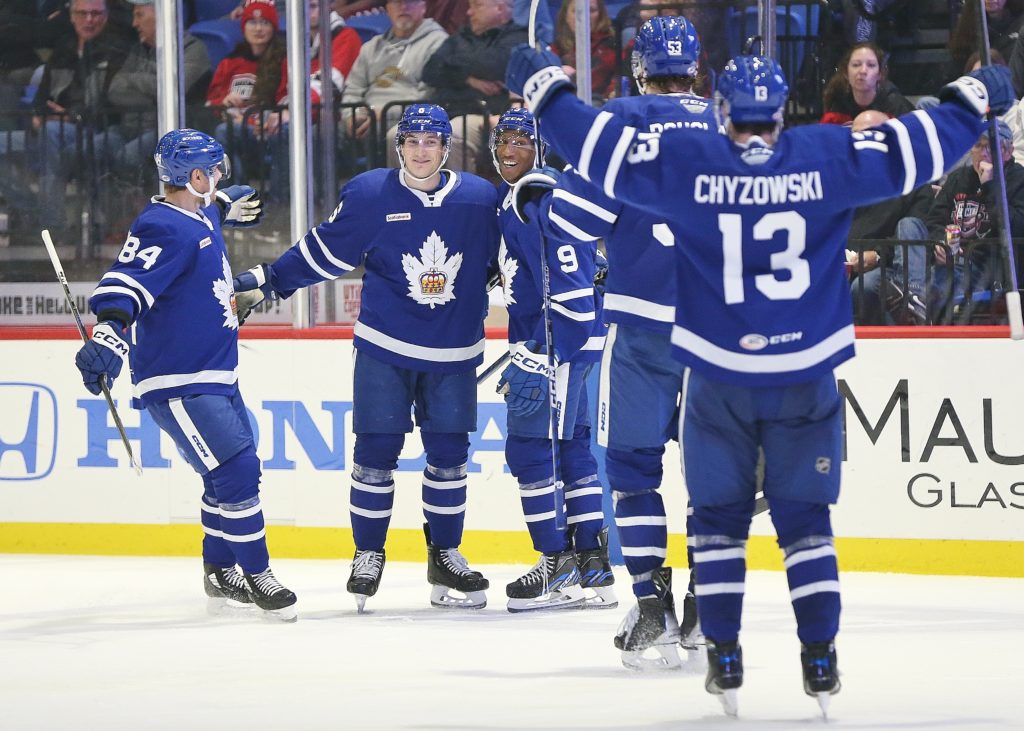 The Toronto Marlies won 2-1 on the road against the Utica Comets on Saturday night.

In the first, both teams exchanged chances, but the goalies stood tall to keep the score tied at zero heading into the second.

Halfway through the second, Marshall Rifai scored his first professional goal and opened the scoring for the Marlies at 7:57, giving them a 1-0 lead heading into the third.

In the third, Adam Gaudette extended the Marlies lead to two with a goal on the power play at 12:58. Utica responded shortly after with a late power play goal by Tyce Thompson at 15:19.

The Marlies continue their Royal Road Trip on November 2nd when they face off against the Rocket at 7:00pm.

On the young defence corps:

It was really impressive how the whole D-corp played tonight – how physical they were, how connected they were as pairs on the ice everywhere they went. It was an impressive game. You can tell that there’s some healthy competition right now in our lineup with guys coming in and out and the guys that we had in today were really hungry and did a great job.

On Dylan Ferguson:
He was unbelievable. He made some huge saves for us. It wasn’t an easy building or team to play against today. Really through training camp and this part of the season, he hasn’t had a lot of minutes in net to get comfortable for his start of the year. It was a really good job by him, solidifying himself and having a good game.

On tonight’s game:
It was a great game all around. It’s tough to play three games in four nights anywhere in any league. Every team’s going to come every night with all they’ve got. I’m really grateful for how the guys played in front of me. Just feels great to get the win out of the way here.

On his first professional goal:

The puck kind of came back to me and then Douglas did a really good job of getting out in front of the goalie’s eyes and I threw one on net and he couldn’t see anything past Dougie so, it went in which was nice.

I think our group’s really coming together. We got contributions from everyone up and down the line up and that’s how you want to win.

The Toronto Marlies wrap up the weekend with a trip to Utica on Saturday night. The Marlies are coming off of a 4-3 overtime victory over the Crunch on Friday, while the Comets defeated the Monsters 5-1.

Toronto is 4-2-0-0 this season while Utica is 2-2-0-0. This will be the first of six meetings between the two teams this season. Last season, the two teams split the season series, each taking home two wins.

A player to watch on the Marlies side is Joey Anderson, who has nine points (6G, 3A) in his last three games. Alex Steeves is second on the team with seven points in six games. On the Comets side, Andreas Johnsson leads the team with six points.