Toronto Marlies Wrap Up Road Trip With Loss To Belleville 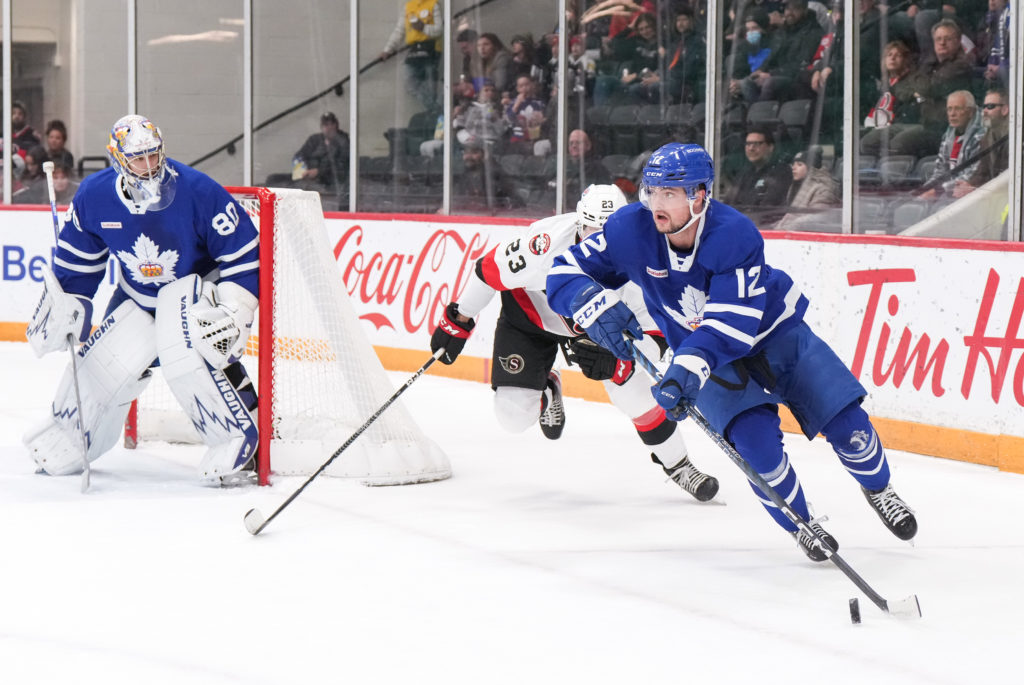 The Toronto Marlies wrapped up their Royal Road Trip with a 6-1 loss to the Belleville Senators on Friday night.

In the first period, both teams exchanged chances, but the goalies stood tall to keep the game tied at zero heading into the second.

In the second period, it was the home team who opened the scoring. Egor Sokolov scored at 3:14 on the power-play to give the Senators the early lead. Throughout the period, Belleville continued to apply pressure. Rourke Chartier, Ridly Greig, and Cole Cassels all scored to extend the Senators lead to four, after 40 minutes of play.

Early in the third, Toronto responded with a goal by Joseph Blandisi at 1:57 to make it 4-1. Cole Cassels and Egor Sokolov both added another for the visitors before the game was over to make it 6-1.

The Marlies return to action Saturday night for a back-to-back against the Abbostford Canucks at Scotiabank arena. Puck drop is at 1:30pm on the Toronto Maple Leafs app and AHLTV.

On tonight’s game:
(This game was) definitely not the way we saw it going. The first period, we took way too many penalties. When you put yourself in a spot where you have a lot of guys who are burning energy, killing off that many minutes in the first period and then you have guys sitting there on the bench that aren’t able to get into the game and get into a flow of their shifts, it disrupts good momentum for us. The first period was tough. When we did get back to five-on-five, I thought we were doing okay. We had a good start even strength after the first period. Ultimately, the disconnect of killing that many in the first just leaked into the second. We had a really hard time gaining momentum against a team that was skating well tonight.

The Toronto Marlies wrap up their Royal Road Trip with a game against the Belleville Senators on Friday night. The two teams last met on November 5th in Belleville, where the Marlies won 5-2.

Toronto’s power-play will look to extend their hot streak. The team has recorded a power-play goal (17) in each of their first twelve games of the season, setting an all-time franchise record for consecutive games with a power-play goal. Currently, the Marlies are 9-2-1-0 when scoring on the power-play.

Players to watch out for on the Marlies side includes Joey Anderson and Logan Shaw who both lead the team with 16 points, and Noel Hoefenmayer who leads all Toronto defensemen with ten points. On the Belleville side, Jake Lucchini leads the team with 15 points.