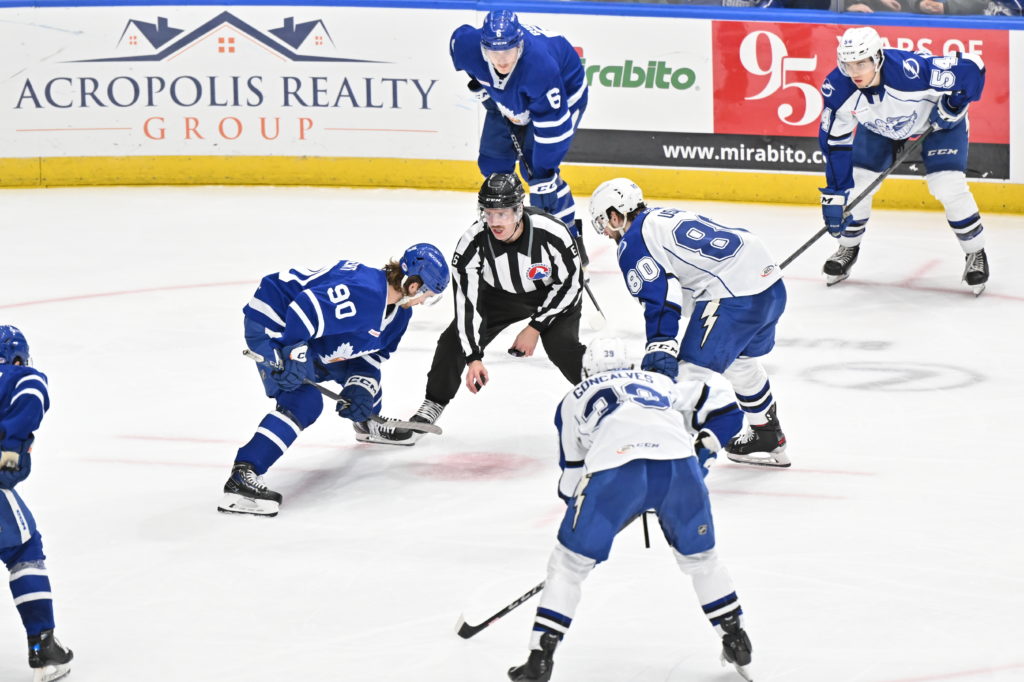 The Toronto Marlies fell 5-3 to the Syracuse Crunch on Wednesday evening. The Marlies are now 7-3-0-0 against North Division opponents and 6-3-1-0 when playing on the road.

In the first period, Kyle Clifford opened the scoring at 4:31 in the frame to give the Marlies the early lead. Shortly after, Syracuse responded with a goal by Darren Raddysh at 8:40 to tie the game at one heading into the second period.

In the second, Syracuse extended their lead by two with goals by Gemel Smith and Daniel Walcott to make it 3-1. Before the period was over, Toronto added two goals by Adam Gaudette and Semyon Der-Arguchintsev to tie the game at three after 40 minutes of play.

In the final frame, the home team kept pressing. Syracuse added two more goals by Gale Goncalves and Ryan Jones before the game was over to make it 5-3.

The Marlies return to action on November 25th against the Cleveland Monsters at Rocket Mortgage Fieldhouse. Puck drop is at 7:00pm on AHLTV.

On tonight’s game:
We had a good start with our team in the first period. We were able to establish the game that we were trying to get to and spend more time in the offensive zone. The second period started to go against us a little bit. We had a hard time getting through the neutral zone and denying some of their speed through the middle of the rink. It was also a resilient second period where we found our way back into the game and after a couple of goals against, the team showed some character through that period.

On opportunities throughout the game:
You’ve got to capitalize on your opportunities. Such a small margin, different in a game. Tonight, we were on the unlucky side but we’ll be back and ready on Friday.

The Toronto Marlies head back on the road to play the Syracuse Crunch on Wednesday night in a Divisional matchup. This marks the third of six matchups between the two clubs. The two teams last met on October 28th where Toronto won 4-3 in Overtime.

The Marlies currently are 10-4-1-0, while the Crunch are 6-6-1-2 to sit first and fourth in the North Division respectively. Toronto is heading into Wednesday’s game with a 3-2 loss to Abbotsford, while Syracuse is coming off a 5-4 win over Belleville.

Players to watch out for on the Marlies side include Logan Shaw and Joey Anderson who sit first and second in the team in points. Shaw has 19 points (7G,12A) in 15 games, while Anderson has 18 points (10G,8A) in 15 games this season. On the Crunch side, Alex Barré -Boulet leads the team with 23 points.