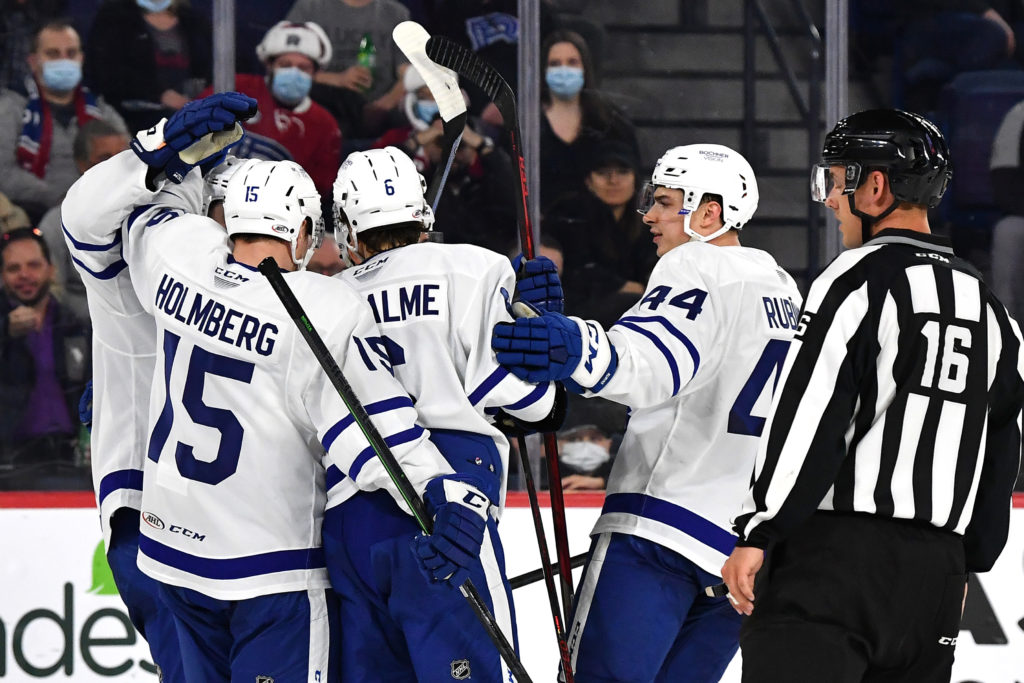 The Toronto Marlies defeated the Laval Rocket 5-1 on Friday night, picking up a big two points. The Marlies are now 2-3-0-1 against the Rocket this season.

In the first period, Laval outshot Toronto 12-9 and took a 1-0 lead into the first intermission courtesy of Joël Teasdale. But, in the second, the Marlies came out strong, putting up three goals to take a 3-1 lead. Joey Anderson scored his team-leading 23rd of the season, while captain Rich Clune tallied his fourth of the year, and Philippe Myers scored his first as a Marlie late in the frame.

In the third, Nick Robertson scored his 15th of the season on a breakaway. Robertson extends his point streak to eight games (3-7–10), and now has 27 points in 25 games played this season. Newcomer Pontus Holmberg scored his first career AHL goal late in the frame, finding the back of an empty Laval net and securing a win for the visitors. Michael Hutchinson stood tall in the Marlies crease stopping 35 of the 36 shots he faced.

The Marlies return to Coca-Cola Coliseum for their final home game of the regular season on Sunday when they host the Belleville Senators. Puck drop is at 4:00pm ET.

This is a tough building to come in in the first period, sold out crowd. This team plays very heavy. I thought our team did a really good job being prepared and ready for that. Once we go through that energy and that push by Laval, we got stronger, we got better. A couple of big kills by our penalty kill, they were really important in the win today. Hutchy making some big saves. We’ve been chasing a 60-minute game all year, I think this was as close to it as we’ve had.

On Rich Clune and his game-winning goal:

It’s electric. Cluner does a lot for our group and when he can add offensively like that, it’s a big lift. The boys get really vibrant on the bench and excited for him. He does so much for us in other areas.

On Filip Král leaving the game in the first period:

Kind of a weird play. It was a great play by him. A good hit on the entry against, put the guy into the glass and got a stall. Things we definitely ask our D to do. Just unfortunate how the skate, probably of the opponent, grazed him on the inside of the leg. A leg laceration so just for precautionary reasons, we made sure we kept him out, not knowing how deep it was or what was the damage.

On tonight’s game:
This was one of our most complete games. It was a must-win for us. There are no excuses. It has to be that way and it’s got to be that way the rest of the year.

On the penalty kill:
Just like the rest of the game, we were winning battles. A lot of the inconsistencies with our team this year have been competing and battles and structure. Tonight, we battled the whole time. Even when things weren’t perfect, we competed, blocked shots, didn’t panic when things broke down. Those are the things we need to do if we want to do anything come into the springtime, we’ve got to have that effort every night.

On tonight’s game:
Based on our penalty kills, that was probably the difference of us being down a few goals early. You could really see the character and the courage and what we know we have in that room, we have a tight-knit group who will do things for each other and it came out there with the blocks and the clears and the saves. That’s what gave us momentum to get going in that game

The Toronto Marlies head east to Laval for a Friday night battle with the Rocket. The Marlies are 1-3-0-1 against the Rocket so far this season. The two teams last met back on February 23rd when Laval won 6-4.

The two teams are in an intense battle for playoff positioning in the North Division. Laval can clinch a playoff berth with a win over the Marlies on Friday night, while the Marlies need a win to keep themselves in the hunt for a playoff spot.

Both teams are coming off of a loss to the Senators in their last game. The Marlies fell 5-4 to Belleville on Wednesday, while the Rocket lost 4-1 on Monday evening.

Some players to watch on the Marlies side include Brett Seney and Nick Robertson. Seney leads the team in points with 55 so far this season, while Robertson has points (6-2-8) in seven consecutive games. On the Rocket side, Jean-Sébastien Dea leads the active roster with 47 points and 25 goals.