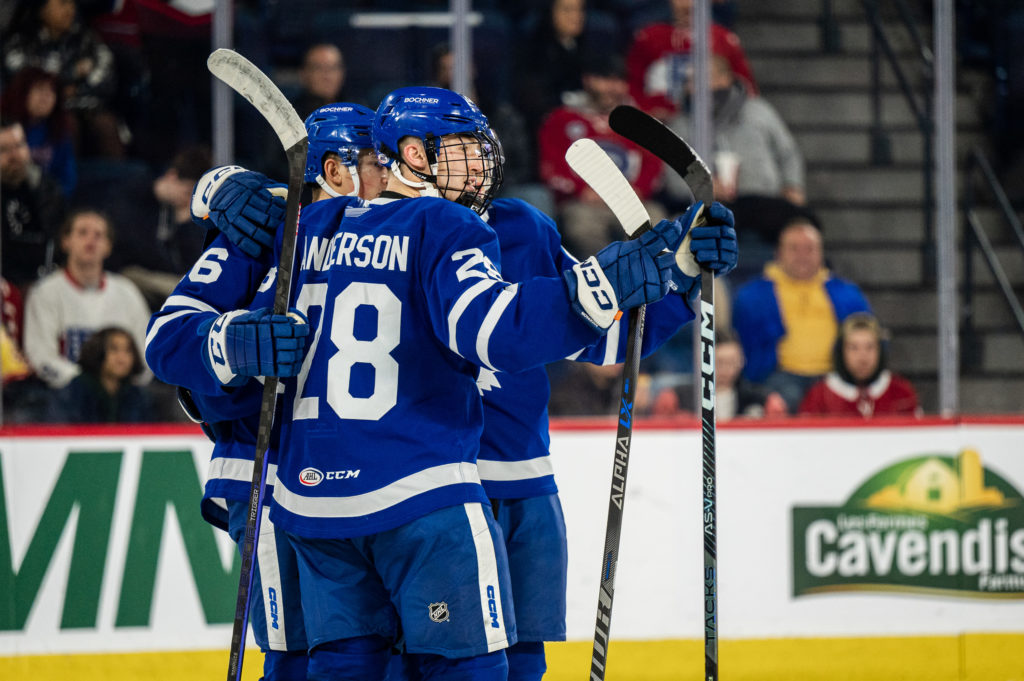 In the first period, it was the visitors who opened the scoring, as Matteo Pietroniro scored his first AHL goal to get the Marlies on the board. In the final minute of the period, Anthony Richard scored on the power-play for the Rocket to tie the game at one.

In the second, the goals just kept coming. Nick Abruzzese scored on the power-play just 56 seconds into the frame to give the Marlies a 2-1 lead. The Marlies power-play has now scored a goal in each of the team’s eight games this season. A few minutes later Gabriel Bourque scored for the Rocket, tying the game at two. Just over two minutes later Jesse Ylönen scored on the power-play to give the Rocket their first lead of the game.

But, less than two minutes later, Logan Shaw tied the game at three with a power-play goal of his own. A couple minutes later, Adam Gaudette tallied his third of the year. Before the period was over, Shaw tallied his second of the game, a shorthanded goal at the 12 minute mark, giving the Marlies a 5-3 lead.

Late in the final frame, Rafaël Harvey-Pinard scored with 1:42 left to play to bring the Rocket within one. But, Joseph Blandisi and Joey Anderson both potted empty net goals to send the Marlies home with a 7-4 victory.

Logan Shaw finished the game with four points (2G, 2A), while defenceman Mac Hollowell has three assists. Keith Petruzzelli held it down in the Marlies crease stopping 42 of the 46 shots he faced.

The Marlies and Rocket will meet again on Friday night at 7:00pm at Place Bell. The game will be available to watch on AHLTV.

We’re fortunate and happy with a victory. This is a tough building to play in. There’s a lot of emotional swings throughout the game. The fans are always into it and bring a lot of energy. Their team feeds off of that. Sometimes playing here can feel hectic. At the end of the day, we’ve got to give up a lot less. Keith Petruzzelli played really well today and kept us in the game and gave us a chance to keep battling back and find a way to win. If we’re looking at a process and what we want to look like and how we want to play as a team, we’ve got to make sure we bring a better effort and a better execution on Friday to make sure that we give ourselves a better chance to win.

First of all, Keith (Petruzzelli) played one heck of a game and we wouldn’t have won that without him. I think it all goes to the big saves he made the whole game to give us the opportunity to do what we did. Power play made a few adjustments, it worked well and we got rolling. I had a few lucky bounces but you’ve got to take those when you get them. It was nice to cash in on the opportunities. We got scrambly in the third. It was just all Keith. Keith had a heck of a game.

On the pressure faced in the third period:
The ebbs and flows, it’s going to happen all year, whether it’s game to game or period to period. You’ve just got to try to bend and don’t break as much as you can. Sometimes it’s hard when you’re sitting back. The big thing on the bench for us is trying to calm down everybody, stay relaxed with the puck and just try to keep going north. We had a couple of plays where we were coming back in our own end where we didn’t have to which puts us in a tough situation. We found a way to come out on top and that’s the biggest thing. Whether it’s the battles in net and the defence getting pucks out, us getting pucks in, it’s the big thing for tonight to take away from this game and the only thing we want to take is we found a way to do it. It wasn’t pretty but it’s going to happen throughout the year.

The Toronto Marlies visit the Laval Rocket for the first of eight meetings between the divisional rivals this season on Wednesday night. The Marlies have won three in a row, including a 2-1 victory over Utica on Saturday. Laval has lost four of their last five including a 5-1 loss to Rochester on Saturday.

The Marlies currently sit atop the North Division at 5-2-0-0 while the Rocket are 6th at 2-5-1-0. The Marlies have picked up a power play goal in each of their first seven games of the season.

A player to watch on the Marlies side is Joey Anderson who recored nine points (6G, 3A) in seven games in October. On the Laval side, Anthony Richard leads the way with six points.