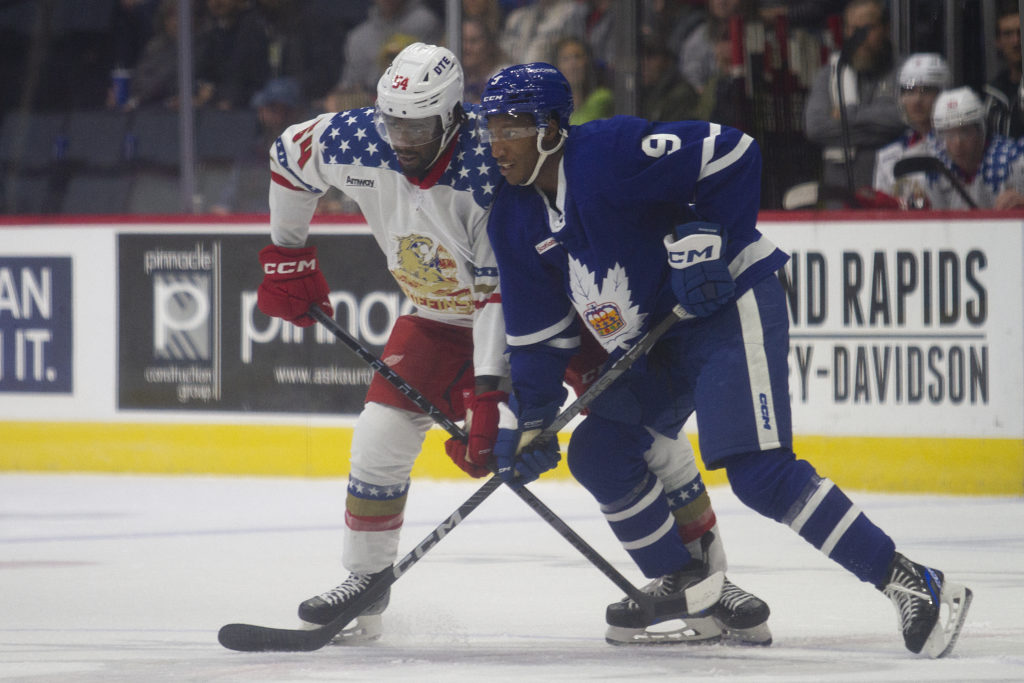 The Grand Rapids Griffins defeated the Toronto Marlies 5-4 in Overtime on Friday night in the first half of a back-to-back. The Griffins improve to 6-6-0-0, while the Marlies fall to 8-2-1-0.

In the first period, Semyon Der-Arguchintsev opened the scoring at 6:11 to give the Marlies the early lead. Shortly after, Pontus Holmberg scored on the power-play at 13:15 to extend the lead to two. In the final minutes of the period, Semyon Der-Arguchintsev potted his second of the night on the power-play to give the visiting team a 3-0 lead heading into the second. With this goal, Toronto matches the all-time franchise record for consecutive games with a power-play goal.

Halfway through the second, Grand Rapids responded with a goal by Joel L’Esperance at 14:27 to keep them within two. Shortly after, William Villeneuve scored at 15:35 to earn his first professional goal.

In the extra frame, Cross Hanas scored at 1:04 to give Grand Rapids the win.

The two teams meet again on Saturday for the second half of a back-to-back in Grand Rapids. Puck drop is at 7:00pm on AHLTV.

On tonight’s game:
(We had a) really strong start. We came out, our process was in place, played a way that was really hard to play against. As the game went on, started to get a little bit careless with the puck. Some turnovers in the middle of the rink, breakout turnovers. We just need to do a better job of communicating and make sure that we care for our pass play.

On Dryden McKay in his first AHL game:

He did a good job. It wasn’t the best of circumstances today where he wasn’t expecting to play and he gets in there and he battled for our team and gave us a chance to win. Ultimately, it was our care for the puck as a team that created the chances against.

On William Villeneuve and his first professional goal:

He’s doing a great job. Every time he gets in and plays in a game, he’s adapting, getting stronger. He’s a quick study, he’s figuring it out. Really top-end play there to have the poise to know that there’s no more back pressure or that he has time to cut up and get a shot off and let the pressure go by him.

The Toronto Marlies continue their Royal Road Trip with a back-to-back series against the Grand Rapids Griffins this Friday. The Marlies are currently 1-1-0-0 against the Griffins to start the season. The two teams last met on October 23rd in Toronto, where the Marlies lost 5-2.

Toronto’s power play will look to stay hot. The team has recorded a power-play goal (14) in each of their first ten games of the season, extending a franchise record. Currently their power-play is second overall in the league (31.8%). Toronto is 8-2-0-0 when scoring on the power-play.

Players to watch on the Marlies side include Adam Gaudette who earned his first professional hat trick last Saturday and leads the league in goals (8), and Logan Shaw who recorded points (5-4-9) in three consecutive games and is tied for the league lead in points (6-8-14). On the Griffins side,  Taro Hirose  leads the team with eleven points.