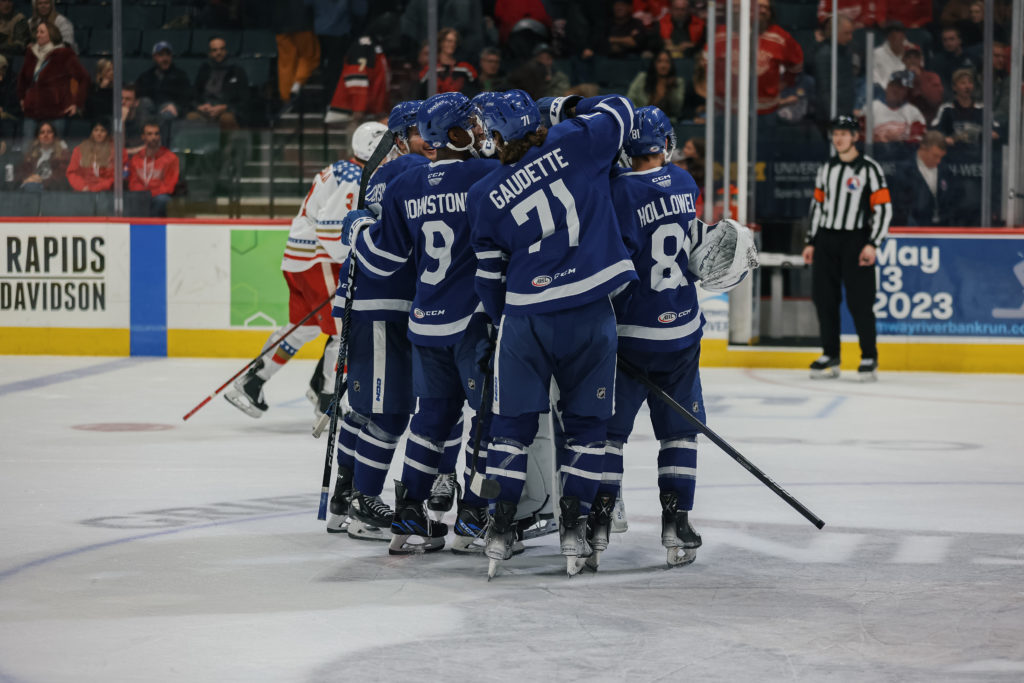 In the first, it was the home team who opened the scoring. Givani Smith scored at 1:14 in the frame to give the Griffins the early lead. Shortly after, Toronto responded with a goal by Logan Shaw at 3:19 to tie the game heading into the second. Shaw has now recorded points (6-5-11) in five consecutive games.

In the second, both teams exchanged chances but the goalies stood tall to keep the game tied at one.

Early in the third period, Graham Slaggert scored at 4:21 to give the Marlies a 2-1 lead. Later, Grand Rapids responded with a goal by Cross Hanas at 19:50 to send the game into Overtime. This was Toronto’s fourth Overtime game of the season.

In the extra frame, it was Joey Anderson who scored on the power-play at 3:28 to give the visiting team a big two points. With this power-play goal, Toronto has recorded a power-play goal (17) in each of their first twelve games of the season, setting an all-time franchise record for consecutive games with a power-play goal. Currently, their power-play is first overall in the league with 30.9%.

The Marlies are back in action on November 18th against the Belleville Senators to complete the final leg of their Royal Road Trip. Puck drop is at 7:05pm on AHLTV.

On tonight’s game:
Really happy with it. Tonight was a very mature game. Great fans this weekend playing here in Grand Rapids and there were moments in the game where the crowd can make you feel like they a lot of momentum and have a lot of highs and lows but our team had a lot of confidence and sticking to our plan and the way we needed to play for 60 minutes.

Every game that he’s gotten into he’s gotten better and better. He’s earning our trust, he’s playing responsibly. He’s really fast. He puts a lot of pressure on the other team when they’ve got the puck and he get into open ice really good and get up ice and get some shots.

On Dryden McKay’s second game and first AHL win:
You could tell he looked more comfortable today. First game yesterday and to play back to back which is not easy at all for a goalie, he looked very comfortable and made some huge saves for us to keep us in it and give us a chance. Can’t say enough about someone coming in and battling like that for our team.

On tonight’s game:
I think we were great tonight. It was unfortunate that they scored at the end of regulation there but we played hard and we played to our system and our identity tonight. It was a really good, gutsy road win for us.

Toronto’s power-play will look to continue to produce. The Marlies power-play is currently first overall in the league with 32.7%.

Some players to watch on the Marlies side include Semyon Der-Arguchintsev who extended his League-leading assist streak to seven games and scored twice on Friday night, and Logan Shaw who is tied for the league lead in points (6-9-15). On the Griffins side, Taro Hirose leads the team with twelve points.