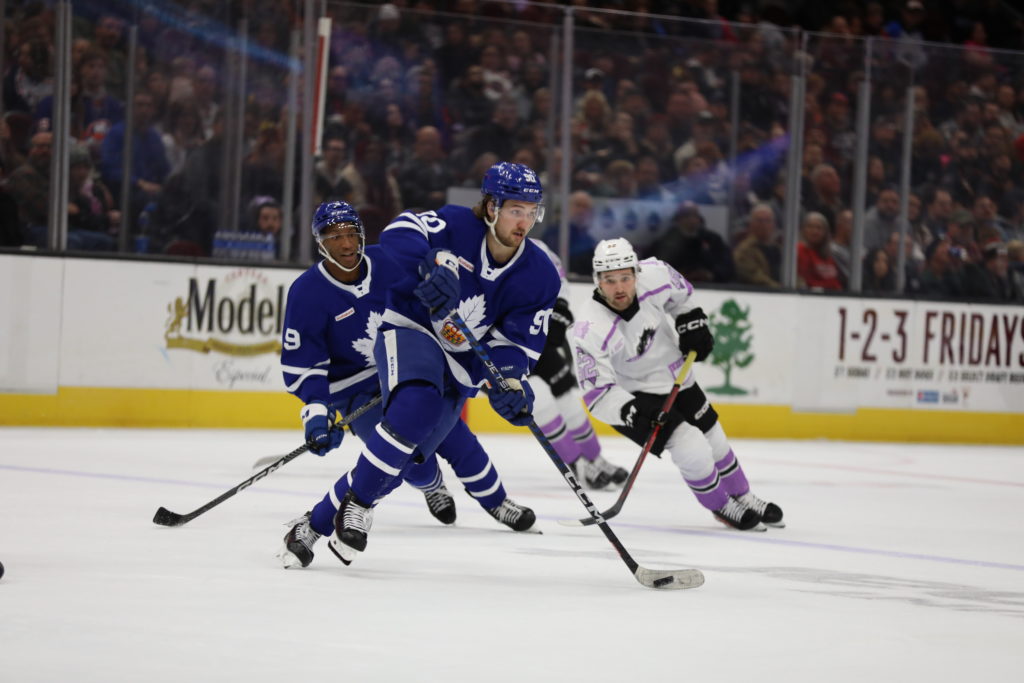 The Toronto Marlies defeated the Cleveland Monsters 4-1 on Friday night in the first half of a back-to-back. The Marlies are now 8-3-0-0 against North Division opponents and 7-3-1-0 when playing on the road.

In the first, it was Toronto who opened the scoring. Adam Gaudette scored on the power-play at 11:03 to give the Marlies the early lead. Gaudette currently is tied for second in the league in goals with 12.

During the second period, both teams exchanged chances but the score remained 1-0 heading into the third.

In the final period, Cleveland responded with a goal on the power-play by Emil Bemstrom to tie the game at one. Shortly after, Toronto responded with a power-play goal by Nick Abruzzese at 7:55 to give the visitors a 2-1 lead. Abruzzese now has 11 points (5G, 6A) in 17 games. Both Alex Steeves and Joseph Blandisi potted an empty netter before the game was done to make it 4-1 and secure the win.

Joseph Woll stood tall in the Marlies crease stopping 20 of the 21 shots he faced in his first start of the season.

Toronto returns to action November 26th for the second half of a back-to-back against the Cleveland Monsters. Puck drop is at 4:00pm on the Toronto Maple Leafs app and AHLTV.
Game Notes:

On tonight’s game:
We’ve been talking a lot lately about our consistent starts which we again had a good first period and now it’s piecing together the second period and coming out and making sure that the game’s not in question. We start gaining even more momentum and push in the second and I thought our team did a good job of that today.

On Joseph Woll’s first start this season:
Impressive. He had some big saves. There was one in the second where he had to push hard to get to the far post on the wrap. Couple of glove saves. He’s an impressive goaltender and to have been out as long as he’s had with his injury, throughout the summer and to miss training camp to come in here today and do what he did was really impressive.

On his game tonight:

It was awesome. Just to be back out there with the team and get back into the swing of playing hockey was really fun … Just going out and being able to play hockey and getting out of the training mindset and just letting myself play. We have a really good group of guys and just to be around them on a day-to-day basis is awesome.

On the team effort in front of him:
I was thinking in the locker room after the game (that) I’ve been here a few years and that was probably one of the most complete games I’ve seen us play as a team. To come out and have it be my first game and the guys play like that is pretty special.

The Toronto Marlies are back on the road on Friday night, as they head to Cleveland to face the Monsters. This marks the first of four matchups between the two clubs this season.

In the 2021-22 season, the Marlies were 3-2-1-0 against their divisional rivals. However, in the last five years, Cleveland has had the edge with an 11-3-4-2 record against Toronto. The Marlies currently sit atop the North Division with a 10-5-1-0 record, while the Monsters sit in third place with an 8-5-0-2 record.

Both teams are coming off a loss heading into Friday night. Toronto lost 5-3 to the Syracuse Crunch, while Cleveland lost 5-4 in a shootout to the Laval Rocket.