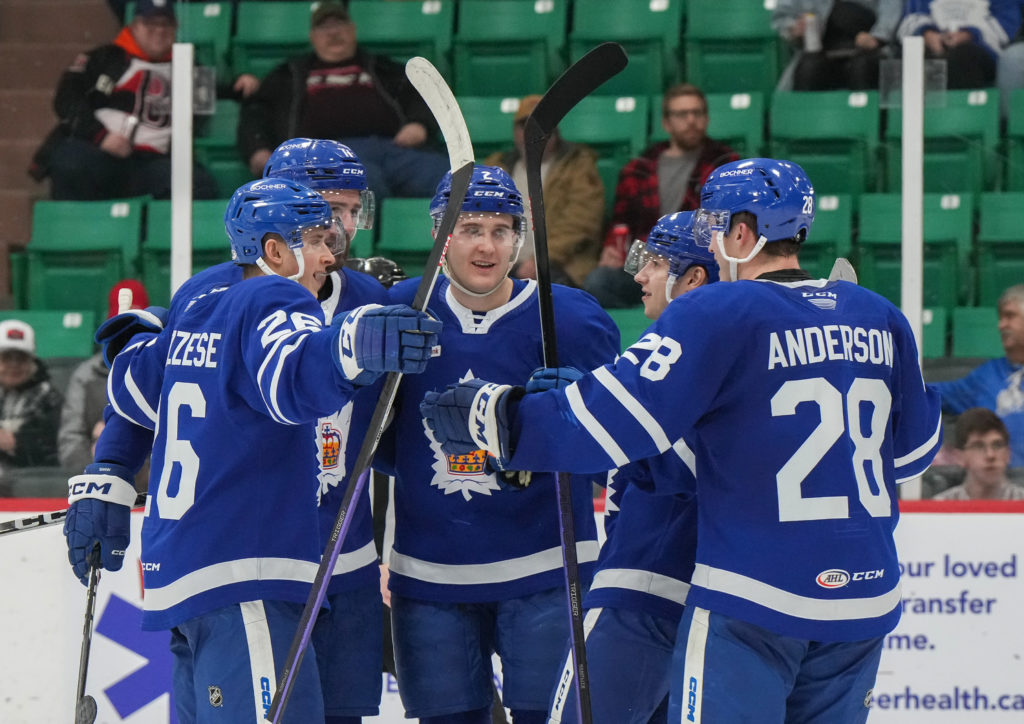 The Toronto Marlies defeated the Belleville Senators 6-5 in a Shootout on Wednesday night in the first of two straight games. Toronto improves to 6-0-0-0 for January and 14-3-1-0 when playing on the road.

Halfway through the first, the Senators opened the scoring with a goal by Angus Crookshank at 13:17 to make it 1-0. Before the period was over, Joseph Blandisi notched his tenth of the season at 19:47 to tie the game at one apiece.

In the second, Belleville regained the lead with a goal by Cole Cassels at 5:11 to make it 2-1. Shortly after, Logan Shaw scored on the power-play at 9:14 to tie the game once again. Less than a minute later, Toronto added another goal by Pontus Holmberg to take the lead and make it 3-2. Later, Belleville responded with a goal by Kyle Betts at 17:08 to tie the game at three. Shortly after, Logan Shaw earned his second of the night with a power-play goal at 18:43 to give Toronto a 4-3 lead after 40 minutes.

Just 29 seconds into the third, Toronto added another goal by Nick Abruzzese to extend their lead to two. Abruzzese is currently tied for third overall amongst rookies in points (11-17-28). Shortly after, Belleville added two unanswered goals by Matthew Boucher to tie the game at five and send it to overtime.

In the extra frame, neither team was able to convert in overtime so the game headed to a shootout.

In the shootout, Logan Shaw scored the lone goal to secure the win for Toronto. Shaw has points (5-10-15) in six consecutive games and is currently second overall in the league in points (15-29-44).

Erik Källgren stood tall in the Marlies crease stopping 25 of the 30 shots he faced.

The Marlies return to action on January 20th when they play Belleville in the second of two straight games. Puck drop is at 7:05pm on AHLTV.

On tonight’s game:
Every time we’ve been in this building, there’s been lots of momentum swings. There was a little bit of a slow start. They always come out really strong in this building. They’re hard to play against in the first period. I thought we found our game in the second. The power play brought momentum. We got to our style of play in the second period, five-on-five which is also brough momentum and in the third period, they make a big push but we’re able to hold on through the extra time to shootout.

On facing Belleville on Friday:
Just keeping things consistent. It’s always hard to play a team twice in a row. We know they’re going to come hard and want revenge so, I think we just have to keep our game consistent and keep doing what we’ve been doing as of late.

The Toronto Marlies continue their annual Boat Show Road Trip with a game against the Belleville Senators on Wednesday night in the first of two straight games. This will be the seventh of twelve meetings between the two clubs this season.

The two teams last met on December 28th where the Marlies won 4-2 over the Senators. Toronto is currently 4-2-0-0 against Belleville this season. Currently, Toronto sits atop the North Division standings in first place with a 24-9-1-1 record, while Belleville is in fifth place with a 15-18-3-0 record.

Toronto will look to continue their momentum heading into Wednesday’s game. The Marlies are coming off a 7-5 win over Rochester on Saturday night, extending their win streak to five in a row. The Senators are coming off a 4-2 loss to Manitoba on Saturday and have currently won three of their last five games.