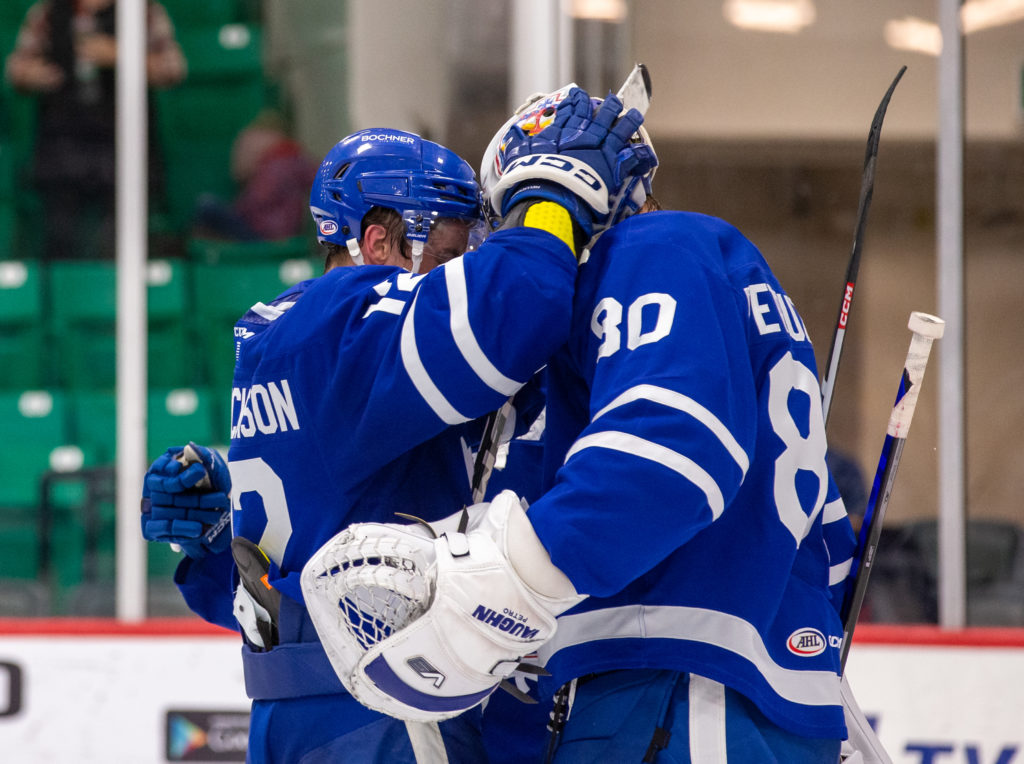 The Toronto Marlies defeated the Belleville Senators 5-2 on Saturday night. Toronto is now 7-1-0-0 against North Division opponents and has improved to 8-2-0-0, while Belleville falls to 4-5-1-0 to start the season.

In the first, it was Nick Abruzzese who opened the scoring at 9:21 to give the Marlies the early lead. Later in the frame, Adam Gaudette scored at 16:21 to extend the lead to two. Shortly after, Belleville responded with a goal by Angus Crookshank to keep the game within one heading into the second period.

Halfway through the second, Adam Gaudette scored his second of the night at 10:31 to make it 3-1 Marlies. Once again, Belleville responded with a goal by Scott Sabourin to stay within one after 40 minutes of play.

In the final frame, Alex Steeves extended the Marlies lead with a goal on the power-play at 5:10 to make it 4-2. Late in the third, Adam Gaudette potted the empty netter to earn his first professional hat trick. He now has points (4-1-4) in four consecutive games and leads the league in goals with eight.

Keith Petruzzelli stood tall in the Marlies crease stopping 26 of the 28 shots he faced to secure his sixth consecutive win.

The Marlies return to action on November 11th and November 12th with a back-to-back series against the Grand Rapids Griffins at Van Andel Arena. Puck drops at 7:00pm on AHLTV.

On tonight’s game:
It was definitely one of the better games. We wanted to make sure we were consistent this week in (being structured). In Laval, we struggled to find some of our structure at times. We spent a lot of time in our D-zone. In talking with the players and meeting with them, they knew that tonight had to be a better effort against a very good team and we were able to find that structure again.

On the team’s performance through 10 games:
It’s still early in the season and we’re really proud of the work that the guys have been putting in and the results have come but we believe that this group still has more to give and grow throughout the year.

On Semyon Der-Arguchintsev:
He’s been outstanding. From where he’s come last year to the consistency that he’s putting in and his competitiveness, attention to details defensively, he’s starting to play more of a 200-foot game and obviously when he has the puck, you can see the special skills that he has and the plays that he can make through the middle of the rink and now he’s starting to piece together the things that are going to help him get to the next level.

The Toronto Marlies continue their Royal Road Trip in a face-off against the Belleville Senators on Saturday night. This marks the first of twelve times the two teams will meet this season in The Battle of Ontario.

Toronto is coming off of a 5-4 Overtime win against Laval, extending their record on the road to 4-1-0-0. The Marlies have now won 5 in a row and are 4-0 on the Royal Road trip heading into Saturday’s game. Belleville is coming off of a 3-2 win against LeHigh Valley on Friday night. They now have a 4-4-1-0 record to start the season.

Players to watch for on the Marlies side include Joey Anderson who has 13 points in his last seven games, and Logan Shaw who has seven points in his last two games. On the Belleville side, Jake Lucchini leads the team with 12 points (4G, 8A).