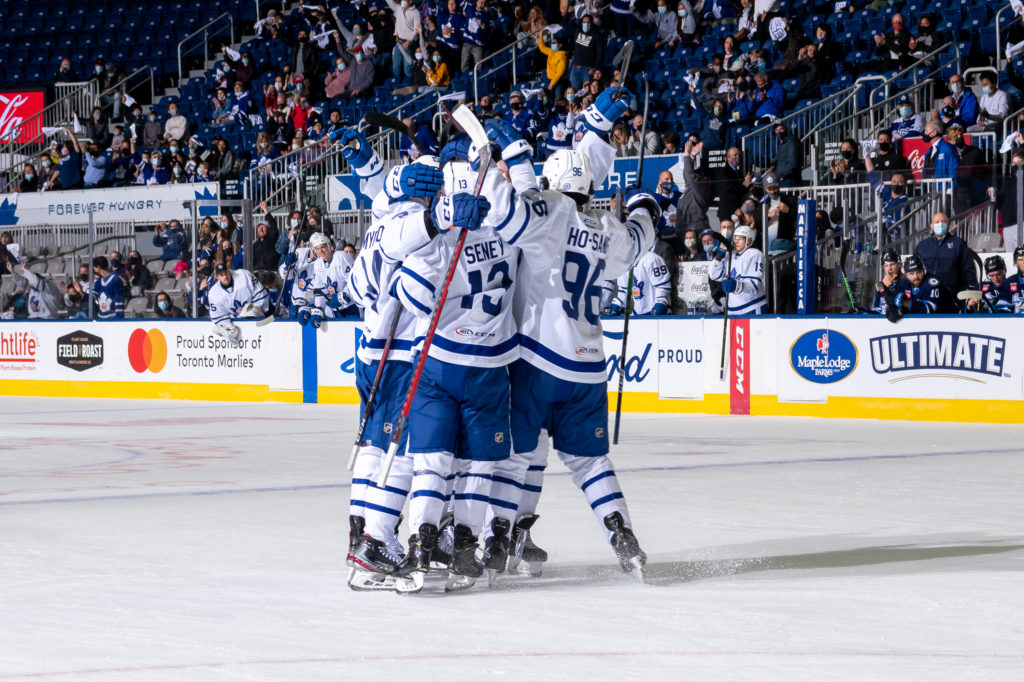 It was an evening of celebration at Coca-Cola Coliseum as the Marlies won their first game of the 2021-22 season in front of a home crowd.

The Marlies had a solid start, applying pressure early in the first. Brett Seney finally broke through for the home side to give the Marlies a 1-0 lead heading into the first intermission.

Josh Ho-Sang made his presence known, scoring two goals in the second period to extend the Marlies lead to two. The Marlies held the Moose to just one goal through two periods, and limited their chances offensively.

Halfway through the third frame, Joey Anderson showed off his skills with a highlight reel goal. Brett Seney found the back of an empty Moose net late in the third as well. The Moose piled on 19 shots in the third, but Erik Kallgren stood tall in the home net and turned aside 34 of the 35 shots he faced all game.

The Marlies will look to continue the momentum as they host the Moose in the second half of a back-to-back on Sunday.

On the start for the Marlies:
The team came with a lot of energy, a lot of nervous and excited energy. I think you’re seeing it a lot too in the NHL games I’ve seen in the last couple days. There were fans back in the stands for a lot of guys for the first time. You could tell our players were really excited to have fans back in here. They were feeling their energy. They were feeling their support. We got some offensive looks in the first. You could tell the game was a little choppy. I think both teams were having a little difficulty finding the flow with that nervous energy. We settled in as the game went on and the guys started to shake that off a little bit.

On the energy from the fans:
We definitely feel the energy. We feel the fans in the building. It’s a big upgrade from the audio noise, static fans that we would hear last season. We’re extremely happy for the support that we have in this market, how awesome our fans are and good to see them back in the building.

On Josh Ho-Sang:
Great start for him. Today was great. His leadership qualities and how he was positively talking about his teammates and giving them good feedback as they came back from shifts. For him to work the way he did, be a good teammate and get rewarded with the points he had was a great start for him.

On Erik Källgren’s performance:
Great. For a goalie to come over here to North America and be tested in an environment like this at a level like this, he was really strong, really composed. Our penalty kill did really good but you’re only as good as your goalie on the penalty kill sometimes. He really stopped the puck back there for us and gave us a chance.

On his performance:
I’m just happy we won. I thought everyone played great. Robbie made a great pass on my first goal and on my second, that’s just our power play working. I think that we had a lot of good pieces tonight. It’s nice to see the puck go in the back of the net. I thought the boys were great. Joey Anderson had an amazing game. Seney had an amazing game. Källgren in the pipes – amazing. And obviously, a pleasure playing with Robbie.

On his first goal:
At that point it’s a 1-0 game and I wanted to give the boys some breathing room. Manitoba played well. The score I don’t think tells how well they played. We went up two, they scored and we answered again. And then in the third period, we played some lockdown defence along with great performances by everyone, sticking to the game plan. That’s what we expect from this group.

The Toronto Marlies return to action today to kick off the 2021-22 regular season. The Marlies host the Manitoba Moose for the first of four meetings between the two teams.

The Moose won the season series between the two in 2021, winning five of their nine meetings during the regular season series. However, in the last 5 years the Marlies have had the Moose number and are 13-7-0-1 against their Canadian counterparts.

The Marlies are coming off a 2020-21 campaign that saw them finish fourth in the newly formed Canadian division. With a revamped roster that boasts a lot of depth, building chemistry will be a key focus for the Marlies as the 2021-22 season gets underway and the team looks to find their groove. Some familiar faces in the lineup include captain Rich Clune, forwards Joey Anderson, Antti Suomela, Semyon Der-Arguchintsev, Pavel Gogolev, Nick Robertson, and defencemen Filip Kral, Teemu Kivihalme, Joseph Duszak, Kristians Rubins, and Mac Hollowell. Some welcome additions that signed with the team in the off-season include Curtis Douglas, Matt Hellickson, Marc Michaelis, Jack Kopacka and Josh Ho-Sang.