Toronto Marlies Wrap Up Weekend With Win vs. Grand Rapids 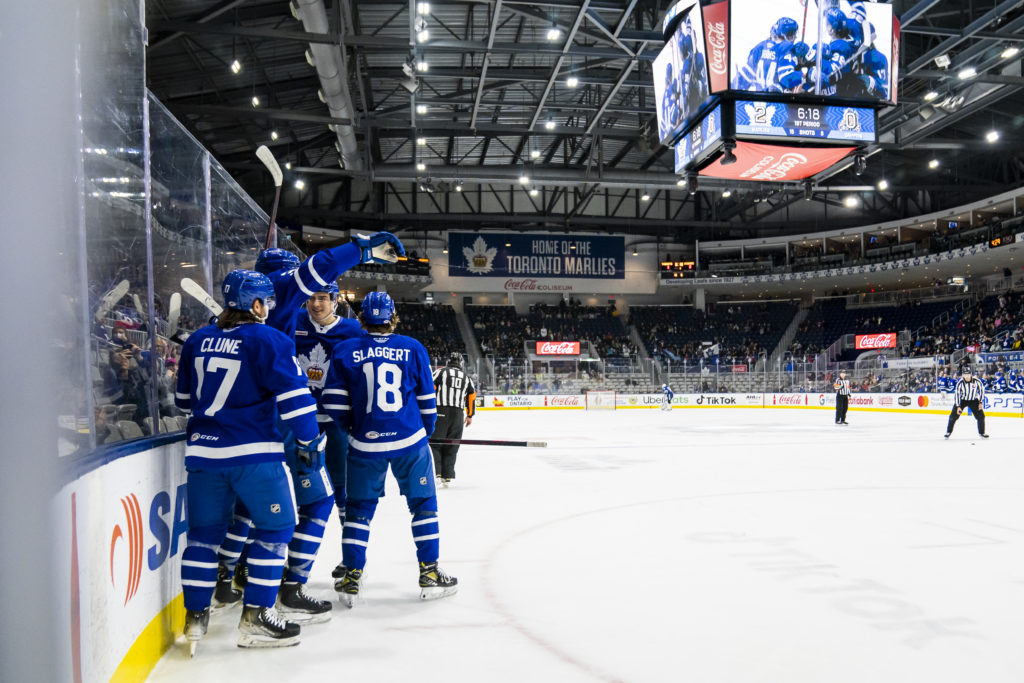 The Toronto Marlies defeated the Grand Rapids Griffins 4-1 on Sunday evening. The Marlies finish the season 3-1-0-0 against the Griffins.

In the first period, Bobby McMann scored his 21st of the season to get the home side on the board first. Joseph Blandisi followed up with one of his own six minutes later, and before the opening frame was over, Curtis Douglas tallied his 12th of the season, giving the Marlies a 3-0 lead at the break.

In the second, the Griffins managed to get one back, as Riley Barber scored his fourth goal this weekend. Both teams exchanged chances in the third, but it was Marc Michaelis, who was playing in his first game since November 21st due to injury, potted an empty net goal late in the frame to secure the win for the home side.

The Marlies return to action on Friday when they host the Hartford Wolfpack. Puck drop is at 7:00pm ET.

Good response from yesterday. Yesterday we got off to a good start, today we got off to a good start, but we were able to sustain that. Special teams were improved. Our power play getting us a couple early to build momentum for us. And I was especially happy with the team with how we finished in that third period. We kept our foot on the pedal, played down in their end where in the past couple of game when we get a lead, we’d end up on our heels a bit. We kept sticking to our plan and playing the right way.

I’m sure it was an emotional return for him. Any time a player is out for that extended time, the amount of work that one puts in to get game ready to come back at times feeling isolated from the group and missing the team environment. And then to come in and play as well as he did in game one. With the help of our medical teams and our development team, there’s been a lot of people that do a really good job in our organization of preparing these players when they come back from these lengthy injuries, and it shows with how well they’re able to play and how well they’re prepared for that first game. For him to get that goal at the end, I was really happy for him.

On the AHL debuts of Max Ellis and Graham Slaggert:

It was great. You can see the craftiness and the playmaking ability of Ellis, pretty smart player. Slaggert, his 200-foot game, responsibility in all areas of our structure, and then even his breakout play off the wall takes a lot of skill to be able to get off the wall under pressure to spring Clune and Dougie up the ice there for that goal.

On today’s game as a response:

It was a bit of a slap in the face not winning that game yesterday. That’s a game that we need to put away and we did our best to use our frustration from that game and put it to good use tonight. I think we did that pretty well and I mean the playoff race is so tight in our division that every win counts and every win really matters. That was a really important win for us tonight.

The Toronto Marlies host the Grand Rapids Griffins on Sunday afternoon, as they look to close out the weekend series against the Michigan counterparts with a win. The Griffins won 7-5 on Saturday, but the Marlies lead the season series 2-1-0-0.

On the Marlies side, Bobby McMann and Alex Steeves have their sights set on the Marlies rookie goal scoring record. Steeves (21) and McMann (20) are just a few goals shy of the franchise record of 24. Meanwhile, Joseph Duszak continues to build on his career season, he currently sits second among AHL defencemen in points with 47. On the Grand Rapids side, Jonatan Berggren leads the team with 49 points.

Puck drops at 4:00pm ET on Leafs Nation Network, and AHLTV. Fans can also follow along on Twitter (@TorontoMarlies) for game updates.