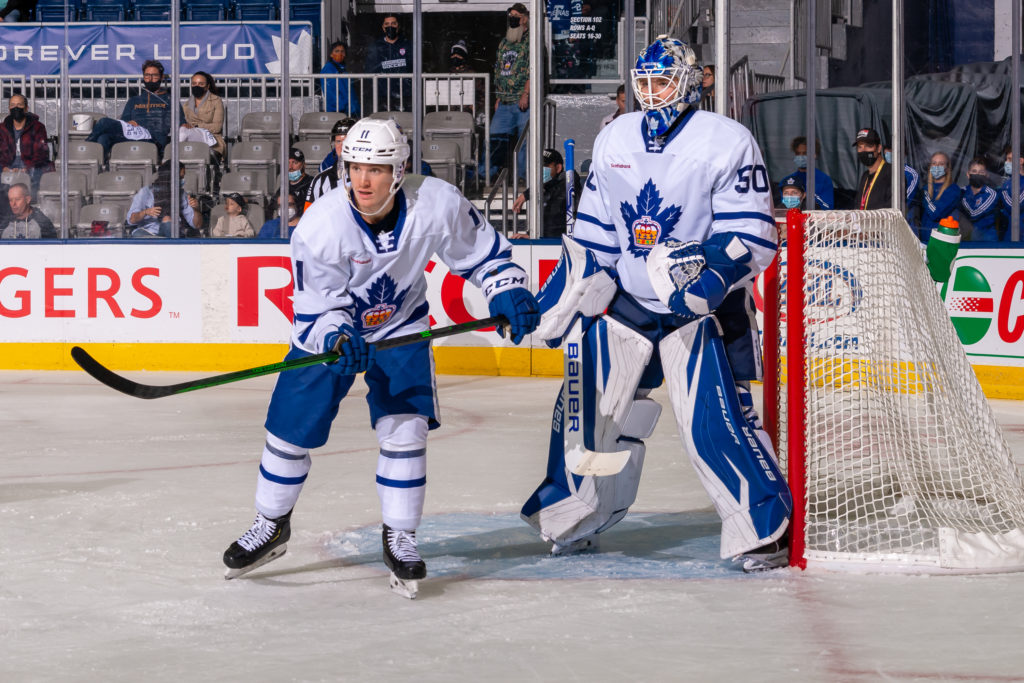 It was a tough night at Coca-Cola Coliseum as the Marlies were shutout for the first time this season.

The Moose came out flying in the opening minutes and the early pressure paid off as they scored in the first 5 minutes to take an early 1-0 lead. The visitors didn’t let up, firing 15 shots on goal in the first period and holding the Marlies to only 5.

The Moose continued to add to their tally. The Marlies struggled to generate good opportunities and found themselves down by 3 after 40 minutes of play.

An early goal in the third period put the Moose ahead 5-0. Toronto was 4-for-5 on the penalty kill and was 0-for-2 on the power play.

The Marlies will look to get back in the win column as they host the Rochester Americans and Cleveland Monsters next weekend in a series of back-to-back games.

Lower body injury. I don’t know to the extent yet. He’ll get assessed, and we’ll know more tomorrow.

More so a maintenance day, nothing serious. His hip was bothering him a little bit and just wanted to make sure that this early in the season we weren’t making it worse and prolonging what’s going on with him.

On the upcoming week of practice:

It’s a really big week. This league is a very, very competitive league and every single night you have to come out and be ready to play. We were flat at the start. We had a hard time finding our game, so it’s going to be important this week that we get back to just an everyday commitment to how hard we are going to work so that we get comfortable being uncomfortable. We get into games and there’s no excuse for questioning where that energy level is coming from and we’ll keep homing in on what our team details are.

The Toronto Marlies are back in action today, closing out the second half of a back-to-back against the Manitoba Moose at Coca-Cola Coliseum.

The Marlies are coming off a big 5-1 win over the Moose last night. Brett Seney and Josh Ho-Sang scored a pair of goals each, while Joey Anderson rounded out the scoring for the home side with a highlight reel goal himself. Kirill Semyonov led the way in scoring, picking up 3 assists, while Erik Källgren stood tall in net stopping 34 of the 35 shots he faced.

The Marlies will be looking to keep the momentum from yesterday’s game rolling into today against a visiting team looking to equal the season series.