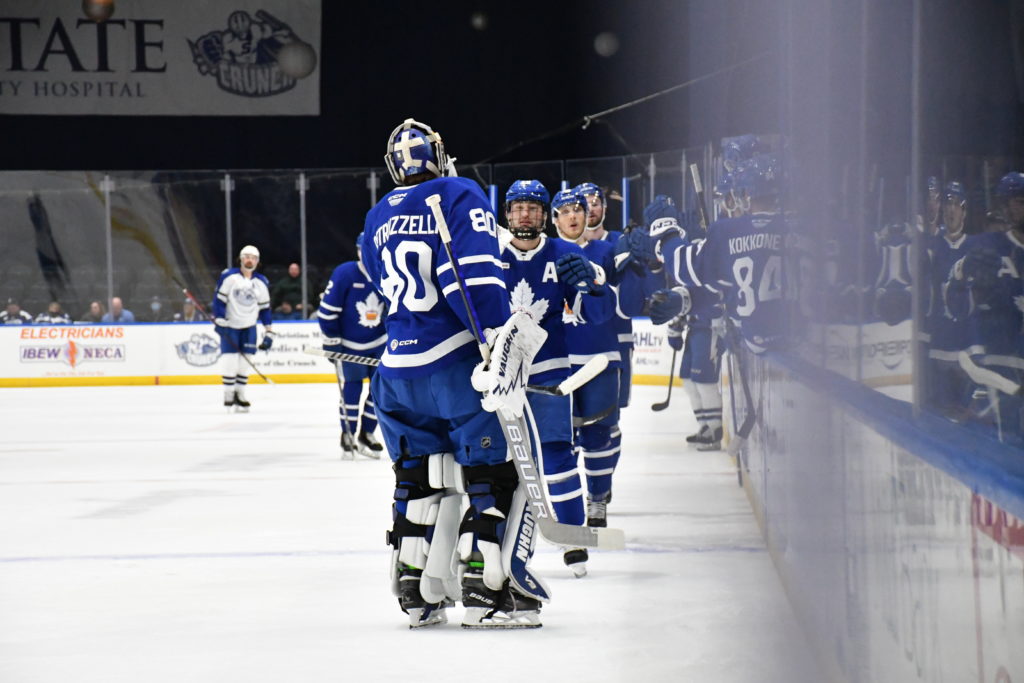 The Toronto Marlies came out on top against the Syracuse Crunch with the 4-3 overtime win on Friday night.

Late in the first, Joey Anderson scored on the power play at 16:30 to give the Marlies the early lead. Shortly after, Jordie Benn scored at 19:06 to give the team a 2-0 lead heading into the break.

In the second, Syracuse responded with an early goal by Trevor Carrick. In the final minutes of the second, Joey Anderson scored his second of the night at 17:09. He now has 9 points in his last four games.

In the third, Alex Barre-Boulet scored two goals in the period to tie the game at 3. 60 minutes was not enough, the game needed overtime.

In the extra frame, both teams exchanged chances, but it was Nick Abruzzese who scored the overtime winner to send the Marlies home with a win.

Keith Petruzzelli stood tall for the Marlies stopping 37 out of 40 shots.

The Marlies return to action on Saturday against Utica at 7:00pm on AHLTV.

It’s always a tough building. This team, even from past years and proving again this year, they’re very disciplined, structured hockey team. They make it really tough to earn any kind of ice. I thought our team did a really good job to start. We came out hard. Appreciate our process and where we were going in the first, drew a lot of penalties because of it. We were skating, we were physical. The second period we started to lose a little bit of the skating, the physicality. They picked up another level. The last couple of games, the second period has not been as consistent as we want but it’s good that we’re finding consistent starts, that gives us a chance in the game. We found it again in the third. This team early on has really shown a lot of maturity throughout a game when they know they start to lose it or don’t have it, they’re able to regain pressure and momentum and things turn in the right direction again.

Really proud of him and how he played. He kept us in that, especially in the second where he made some huge saves. And for a tough bouncer (Syracuse’s first goal) like that to go in and to not lose his composure, stay in the game, make the next big save, that shows how mentally tough he is as a goaltender.

The Toronto Marlies kick off their eight-game Royal Road Trip Friday night in Syracuse. The Marlies will be on the road for three weeks, returning home to play the Abbotsford Canucks at Scotiabank Arena on November 19th.

The two teams last met on Wednesday night in Toronto where the Marlies won 5-3. Toronto’s special teams made a huge impact in that game, as the Marlies scored two power-play goals and one short-handed goal. Toronto has scored a power-play goal in their last four games. The Marlies have a  3-2-0-0 record, while the Crunch are 1-2-0-2.

Some players to watch on the Marlies side is Joey Anderson who has seven points (4G, 3A) in his last three games. Logan Shaw also has five points (1G, 5A) in his first five games with the Marlies. On the Crunch side, Felix Robert leads the team with 10 points.