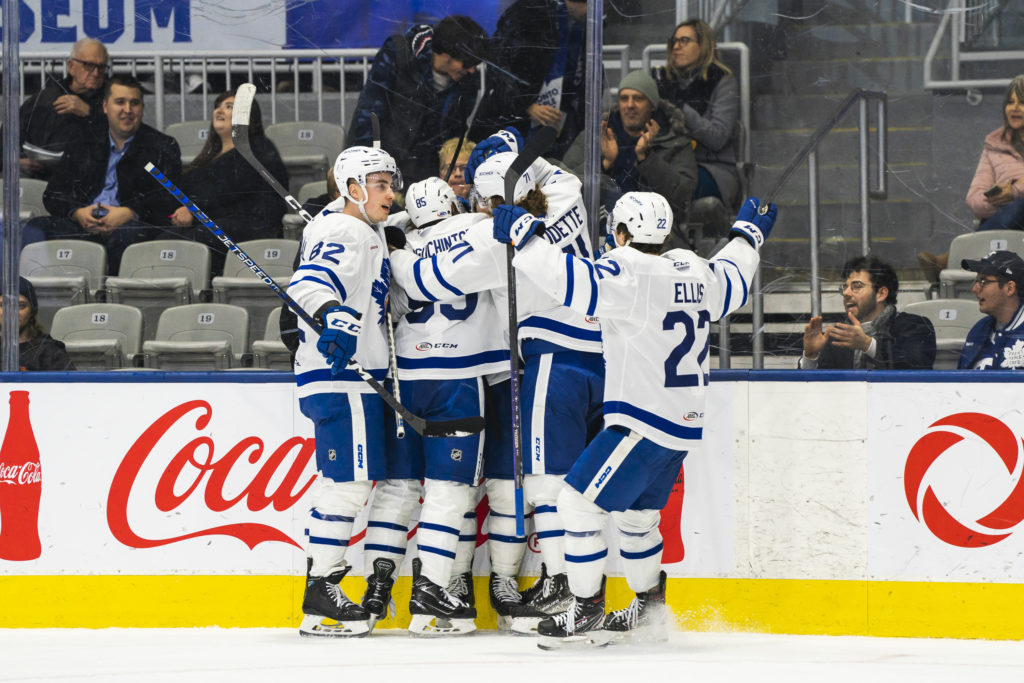 The Toronto Marlies defeated the Manitoba Moose 3-2 on Wednesday night in the first of two straight games. The Marlies have now won four in a row and are 5-1-1-0 against Central Division opponents.

In the opening period, it was the visitors who got on the board first with a goal by Jansen Harkins at 9:43 to make it 1-0. Less than a minute later, Adam Gaudette notched his 16th of the season at 10:32 to tie the game at one. Gaudette has goals in four consecutive games and currently leads the team with 16. Later, Toronto took the lead with a goal by Logan Shaw at 14:54 to make it 2-1 after 20 minutes.

Early in the second period, Manitoba responded with a goal by Dominic Toninato at 2:47 to tie the game at two apiece. The score would remain tied heading into the third.

In the final frame, Joseph Blandisi scored a power-play goal at 10:23 to regain Toronto’s lead and make it 3-2 to secure the win. Toronto’s win over Manitoba marked the 700th win in Marlies Franchise history.

Joseph Woll stood tall in the Marlies crease stopping 30 of the 32 shots he faced. With this win, Woll set a Marlies Franchise record for consecutive wins in a single season with nine.

The Marlies return to action on January 13th when they play the Manitoba Moose in their second straight game. Puck drop is at 7:00pm on the Toronto Maple Leafs app and AHLTV.

Much better process and effort by our club. I thought five-on-five we did a better job of controlling the game and getting to the game that we’ve been wanting to see for most of the season. The spirit, the energy that the team brought today was really positive.

On the team’s energy heading into the third period:
These guys are really driven. They’ve felt the last couple of games we were a bit inconsistent with our play and what our process is and how we want to look as a team. They were hungry to get back to how we’ve looked and felt for most of the season and they did a great job for 60 minutes today.

His consistency (has impressed). His dedication to what he loves to do. You always see him at the gym, at the rink always taking care of his body. He comes in with the same attitude every day. His mindset is strong. The rehab he put in for his shoulder this summer is really showing and he didn’t lose a step. It’s pretty impressive to watch.

On Noel Hoefenmayer and Logan Shaw named to the All-Star Classic:
It’s good for them to get recognized. They’ve been key pieces for us and they’re a big reason why we’re in first place (in the North Division) here. It’s great for them, for Moore to get recognition and a couple of our trainers as well. Hoefenmayer from the back end, he’s been getting shots off in his first full year pro, it’s pretty impressive and then Shaw’s been doing this for a long time.

The Toronto Marlies continue their home stand with a game against the Manitoba Moose on Wednesday night in the first of two straight games. This marks the first of four matchups between the two clubs this season.

The Marlies are heading into Wednesday’s game with a 4-2 win over the Laval Rocket on Sunday night, while the Moose are coming off a 6-1 loss to the Belleville Senators on Saturday night. Toronto has currently won four of its last five games.

Players to look out for on the Marlies side include Logan Shaw who leads the team with 36 points (11G, 25A), and Adam Gaudette who has goals in three consecutive games. On the Moose side, Alex Limoges leads the way with 24 points (7G, 17A).

Puck drop is at 7:00pm on the Toronto Maple Leafs app and AHLTV.