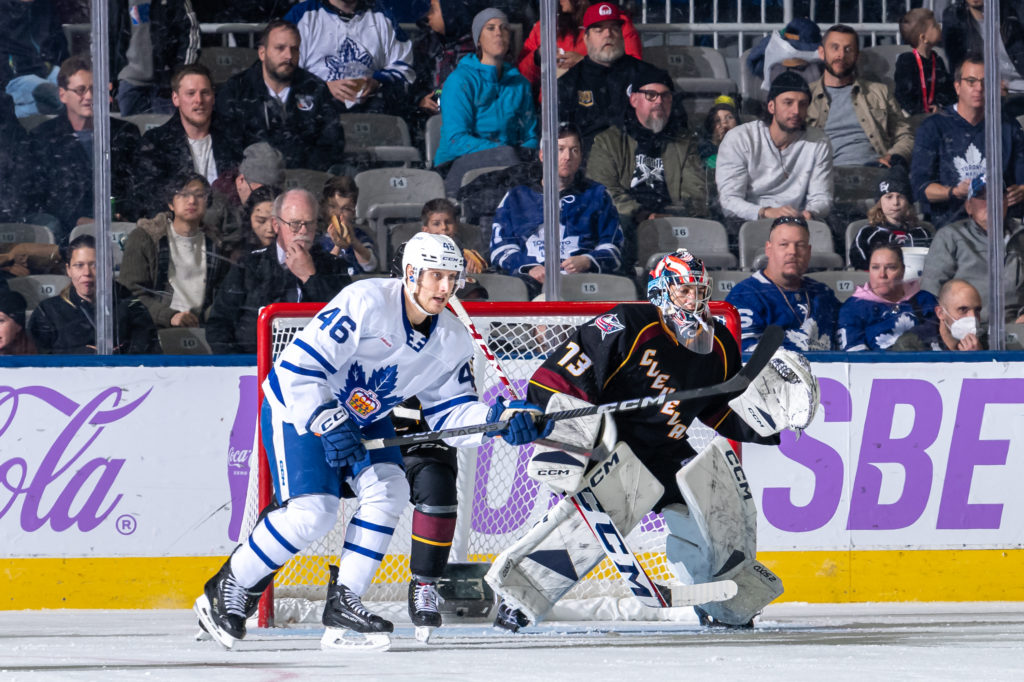 The Toronto Marlies fell 5-1 to the Cleveland Monsters on Saturday night in the second half of a back-to-back. The Marlies fall to 6-4-1-0 for the month of November and 4-3-0-0 when playing at home.

In the second period, both teams exchanged chances but the goalies stood tall to keep the score at 2-1.

In the final frame, the visitors kept pushing. Cleveland scored three goals by Cole Fonstad, Justin Richards, and Joona Louto to extend their lead and take home the win.

The Marlies return to action on December 2nd for a game against the Utica Comets. Puck drop is 7:00pm.

On today’s game:
Power play helped us get the lead. Generally speaking, I thought five-on-five we had a pretty good game. Their goalie made a lot of good saves. Thought we controlled the game at even-strength for the most part. We just had a hard time cracking the code on getting pucks through him. Towards the end in the third period, they had a little bit of a push. Obviously playing a team back-to-back on a weekend, it’s really hard to beat a team twice and they were super motivated to not lose two in a row to us. Overall if we’re looking at our process, there are games this year our special teams and goaltending have won us the game even when we may not have controlled the game. I see this as a fourth game now where we’re playing much better, more consistent in controlling the game at even-strength. Today we just couldn’t find the bounces.

On the Rich Clune retirement ceremony:
Just trying to hold back the tears. Since I’ve been here, a lot has happened, and he’s been here the whole time since this season. As a head coach, you lean on your captain a lot. There’s a lot of conversations. We’re on the same page, pulling the rope in the same direction and you really need the perspective and voice of your captain to help you as a head coach to lead your team. I can’t say enough for what he’s done for me, for what he’s done for this organization and what he’s done for his teammates. He’s continuing to do it here as a development coach within the Toronto Maple Leafs organization. For all of us staff that have worked with him and been through thick and thin, it was great to celebrate him and the emotions were very positive.

The Toronto Marlies return home to face the Cleveland Monsters on Saturday evening for the second half of a back-to-back.

The two teams last met Friday night in Cleveland where the Marlies won 4-1. Toronto improved to an 11-5-1-0 record, while Cleveland fell to an 8-6-0-2 record. The Marlies are currently 8-3-0-0 against North division opponents and 6-3-1-0 for the month of November.

Toronto’s power-play will look to stay hot. The team has currently had seven multi-power play goal games this season and is 11-3-1-0 when scoring on the power-play.

Players to look out for on the Marlies side include Adam Gaudette who has points (4-2-6) in five consecutive games and is tied for second in the league in goals with twelve. On the Monsters side, Trey Fix-Wolansky leads the team with 22 points.

Puck Drop is at 4:00pm on the Toronto Maple Leafs app and AHLTV.