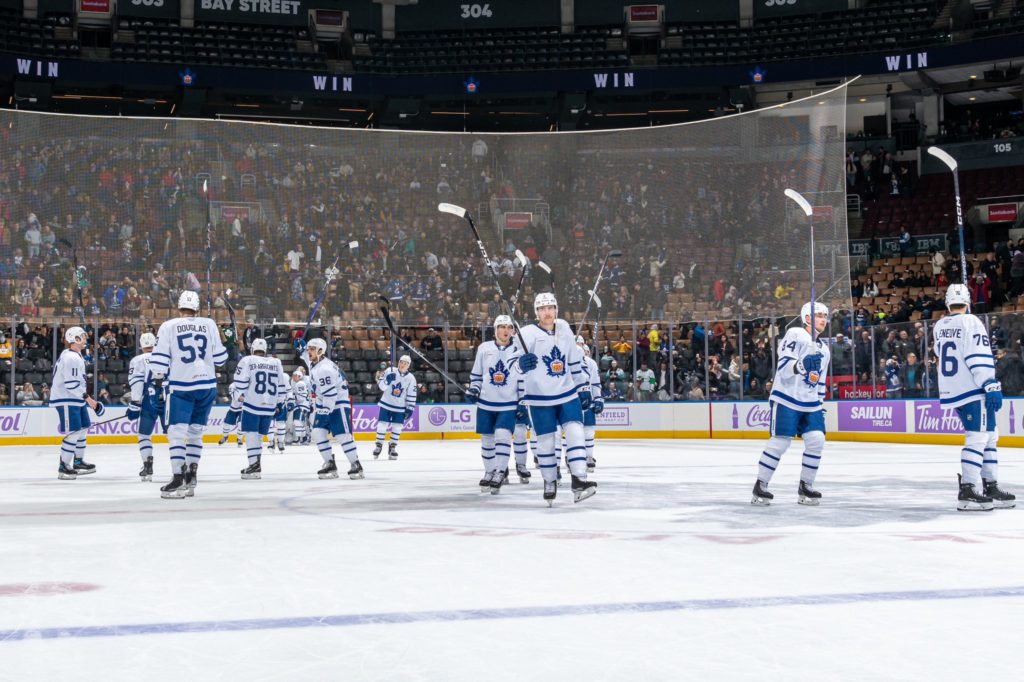 In the first period, it was the home team who got on the board first. Joey Anderson scored on the power-play at 1:16 to give the Marlies the early lead. Later, Noel Hoefenmayer scored at 11:48 to extend the lead to two heading into the second period.

During the second period, the Marlies power-play struck again with a goal by Semyon Der-Arguchintsev at 4:01 in the frame. Halfway through the period, Abbotsford responded with two goals by John Stevens and Linus Karlsson to make it 3-2 after 40 minutes.

Early in the third period, Abbotsford scored with a goal by Lane Pederson at 6:25 to tie the game at three. Later, Mikhail Abramov scored on the power-play at 13:13 to earn his first of the season. Shortly after, Adam Gaudette potted the empty net to earn his ninth of the season and make it 5-3 Marlies.

On what can be cleaned up from today’s win:
Consistency has been a big word in our room. We have found consistent starts. That was something we really wanted to focus on at the beginning of the season and I feel as though the team has a done a good job at that. The first period lead that we got set us up for success. You’d like the group in the second period to come out and really give (Abbotsford) nothing. I felt like we got a little comfortable, some poor puck decisions through the middle of the rink which fueled their opportunities. But then found a way again in the third period to get a win.

On Keith Petruzzelli in relief:
The big glove save in the third period was beautiful. We obviously don’t want to give up a chance like that but he kept us in the game. It’s always tough coming into a game partial way like that and to play the way he did was great. Yesterday was not a reflection on him (6-1 loss against Belleville). Being up, it had been some time since he had been in some game action and it can always take a little bit to find your timing, but he played well for us yesterday. Yesterday was more about the team giving up the chances that he did.

(It was) huge. The season hasn’t gone to plan as he would have expected with opportunity and ice time. He’s doing a great job at finding his way. He didn’t get to start the season in training camp and get his legs under him like the other guys did. He’s a great player that we really believe in and it was good to see him like that.

It’s always tough playing back-to-backs but we came out hard and got off to a good start which is what we’ve been focusing on. Definitely got to clean up the middle of the game to have a full 60 minutes of controlling the game but credit to us, we didn’t give up, we didn’t get down on ourselves. We just went back to work in the third period. There’s definitely things to work on and the good thing about back-to-back-to-backs is we’ve got another game tomorrow to work on stuff.

On Keith Petruzzelli:
He’s been great all year. He’s been an anchor for us all year. Coming in cold like that after a back-to-back is not something easy to do but he came in and Ferguson played great to start us off and then Petruzzelli picked it up after he went out and held us in there.

The Toronto Marlies host the Abbotsford Canucks on Saturday Afternoon at Scotiabank Arena in the first half of a back-to-back. This will mark the first of four matchups between the two clubs this season.

Players to look out for on the Marlies side include Joey Anderson and Logan Shaw who both lead the team with 16 points. On the Canucks side, Linus Karlsson leads the team with ten points.

Puck drop is at 1:30pm on the Toronto Maple Leafs app and AHLTV.