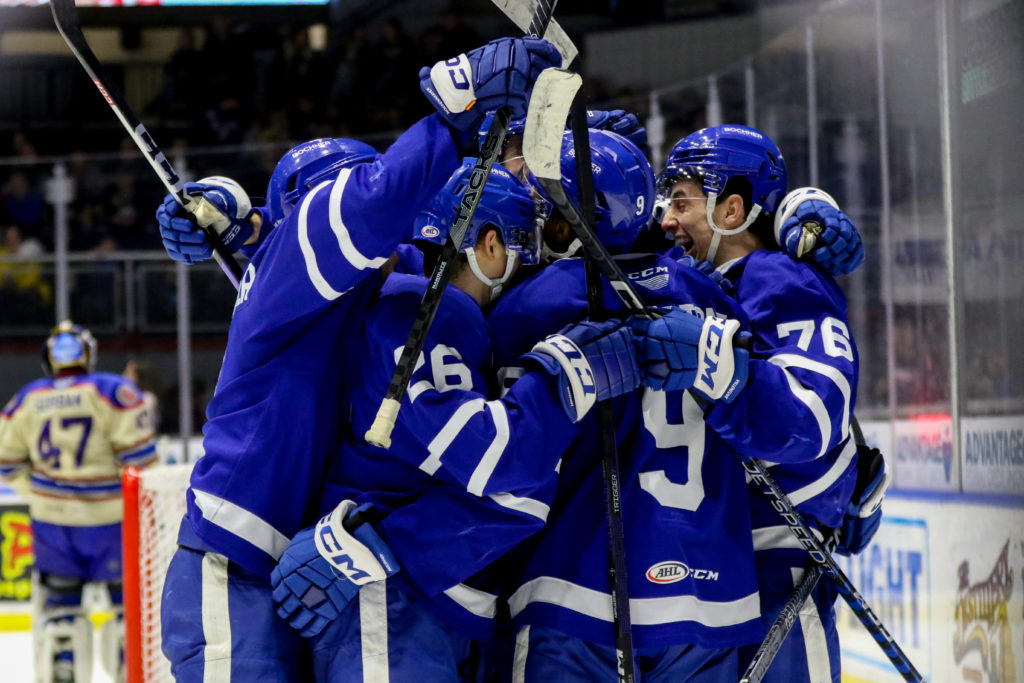 The Toronto Marlies opened their eight-game road trip with a 7-5 win over the Rochester Americans on Saturday night. Toronto has now won five in a row and improves to 16-7-0-1 against North Division opponents.

Late in the first, it was Rochester who opened the scoring with a goal by Jiri Kulich at 17:31. Shortly after, Toronto responded with a goal by Logan Shaw at 18:26 to tie the game at one apiece. Shaw finished the game with five points (1G, 4A), and currently has 13 points in his last five games.

In the final frame, the goals kept coming. Just 35 seconds in, Jeremy Davies scored to extend Rochester’s lead to two. Shortly after, Toronto responded with two goals by Marc Johnstone at 4:58 and 13:21 to tie the game at four. Johnstone’s goal at 4:58 marked his first career AHL goal. Less than a minute later, Mason Jobst added another for Rochester at 14:07 to regain the lead and make it 5-4.

Before the period was over, Toronto added three unanswered goals. Late in the 3rd, Noel Hoefenmayer scored at 16:02 to once again tie the game. With just nine seconds remaining, Nick Abruzzese scored his 10th goal of the season to give the Marlies a 6-5 lead. Joey Anderson added an empty net goal with two seconds left, sending the Marlies home with a 7-5 victory.”

Joseph Woll stopped 28 of the 33 shots he faced for his 10th consecutive win this season.

The Marlies return to action on January 18th when they visit the Belleville Senators. Puck drop is at 7:05pm on AHLTV.

On tonight’s game:
We had our responses when being scored against. The bench never felt flat, never felt desperate or out of control. I thought the last four periods going into this game our team had been controlling the game better, we had good structure. Rochester definitely challenges you in the sense of how fast they play, their speed and skill and how much they play through the middle of the rink. Joe Woll did a great job of answering the bell when needed. We kept finding answers to get back to our game and find momentum again.

We’ve ben waiting for him to put a puck in the net for quite awhile, not due to a lack of chances or ability but he’s had some good looks that just haven’t hit the back of the net. There are other areas of the game where he just does so much for us but we’re really proud and happy for him to get those.

On Logan Shaw’s five-point game:
He finds a way to always have an impact in different ways and I think he impacted every square inch of the rink tonight. He’s our captain for a reason. He leads the team and the group as a whole just never quit, never gave up on this one.

I don’t think there’s a guy that anyone’s wanted to score for as long as I can remember more than him. He’s someone who just comes to the rink everyday and lays it all on the line. I think he perfectly embodies the type of game that we try to play. To see him get rewarded not only once but twice and they ended up being two huge goals, we were really happy for him.

On the come back win:

We’ve just got a really close group. Just a never say die attitude. It was a back-and-forth game, so many twists and turns. We score, they score. It’s just the character of the guys in the room. We always have the belief that we’ll win any game we play in.

On the support from his teammates on his first goal:

It just means a lot. Everyone was so excited so, it makes it a special moment for me. Everyone talks about never forgetting your first, I won’t forget it because everyone made it so special.

The Toronto Marlies head out on the road for eight straight games to close out the month of January. Their first stop is Rochester, New York on Saturday night for a tilt with the Americans. This will be the fifth of eight meetings between the two teams this season.

Some players to watch on the Marlies side include Adam Gaudette who leads the team in goals with 16, and has scored in four straight games, as well as Logan Shaw who has points (2-5–7) in four consecutive games, and leads the team in points with 37. On the Amerks side, Brandon Biro leads the way with 29 points.