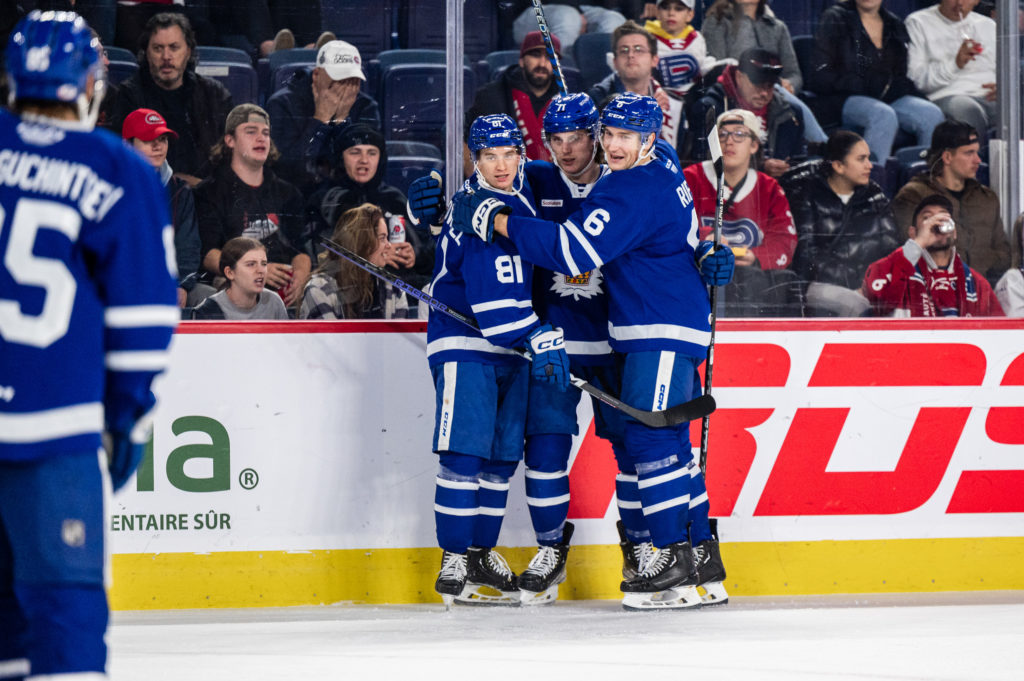 The Toronto Marlies came out on top against the Laval Rocket with a 5-4 win in Overtime on Friday night. Toronto has now won five in a row and is 4-0 on the Royal Road trip.

In the first period, Graham Slaggert opened the scoring at 1:13 to notch his first professional goal and give the Marlies the early lead. Laval responded with a goal by Jesse Ylönen at 7:18 to tie the game. Shortly after, Adam Gaudette scored at 10:33 to give Toronto the lead heading into the second.

Halfway through the second, Logan Shaw scored on the power play at 12:59 to extend the Marlies lead. The Marlies power-play has scored a game in nine straight games, extending a franchise record. Laval responded with a goal by Lucas Condotta to keep the Rocket within one.

Late in the third, Logan Shaw scored his second of the night at 15:38 to make it 4-2. Laval responded shortly after with two goals by Rafaël Harvey-Pinard and Xavier Simoneau to send the game into Overtime.

In the extra frame, both teams exchanged chances, but it was Logan Shaw who scored the Overtime winner to earn the hat trick. He now has seven points (5G, 2A) in his last two games.

Dylan Ferguson stood tall in the Marlies crease stopping 36 of the 40 shots he faced, to help secure the win.

On Graham Slaggert and his first professional goal:
It’s been great. He’s a strong skater. He can transport the game from the top of the circle to the top of the circle and there he was just driving wide and he had a good scoring route that kept the goalie off his angle with a great shot. He’s a great utility player. You can utilize him in a lot of different spots. Left, centre, right, penalty kill, he’s good at faceoffs, there’s a lot of usage for him.

On tonight’s game:
I thought we definitely played a better game. They’re a good team too and they’re going to play hard as they always do in this rink. The game kind of went the same way as it did yesterday where we were up and they put the push on. Even though they scored, I thought we played well. Ferguson played great. Big saves, really timely saves. We just didn’t quit. We stuck to our structure, played a better structure game than we did last night even though it went to overtime. We keep building on this, keep pushing in the right direction, good things are going to happen with our group.

The Toronto Marlies visit the Laval Rocket on Friday night for the second straight game. The Marlies are currently 5-1-0-0 against North Division opponents and 3-1-0-0 on the road to start the season.

The two teams last met on Wednesday night in a high scoring match where the Marlies won 7-4. The Marlies have now won four in a row. Toronto is currently 1st in the North Division with a 6-2-0-0 record, and Laval sits 7th with a 2-6-1-0 record.

Toronto’s power-play has been off to a good start so far this season. The team has recorded a power-play goal in each of their first eight games of the season, extending a franchise record.

Players to watch on the Marlies side include Joey Anderson who leads the Marlies with 10 points (7G, 6A), and Logan Shaw who notched his first career four-point game on Wednesday night. On the Laval side, Anthony Richard leads the Rocket with 7 points (5G, 2A).