Toronto Marlies Wrap Up Weekend With Win Over Laval 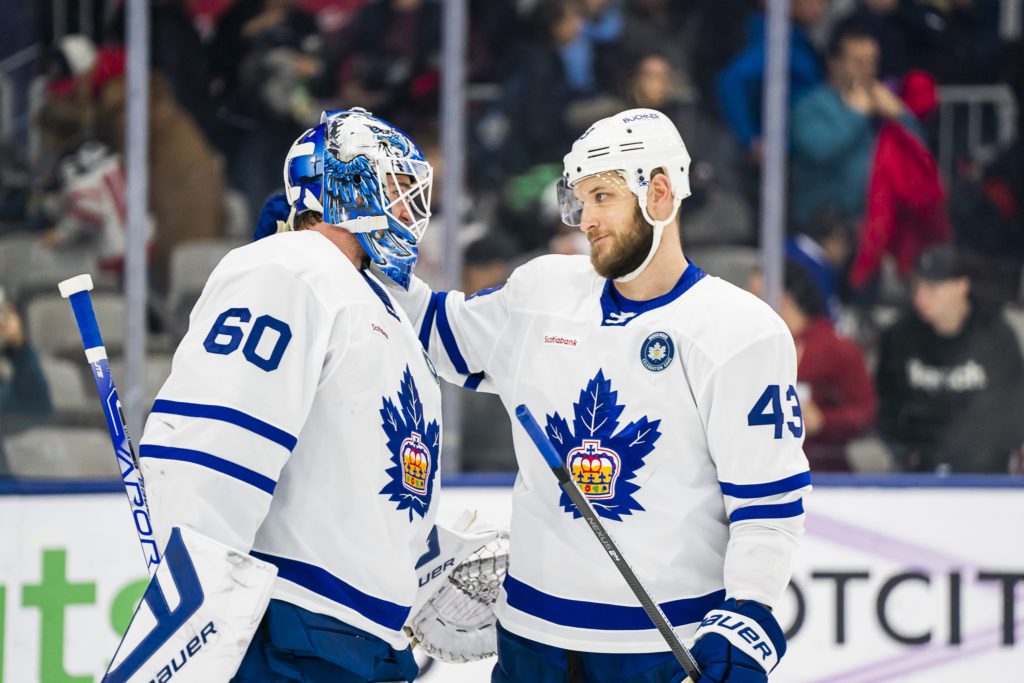 The Toronto Marlies wrapped up their weekend with a 4-2 win over the Laval Rocket on Sunday night. Toronto improves to 15-7-01 against North Division opponents and 3-0-0-0 against the Rocket.

In the first, it was the home team who opened the scoring with a goal by Adam Gaudette at 4:42 to make it 1-0. Gaudette has scored in three straight games. The Marlies are currently 12-5-1-1 when scoring first. Later, Laval responded with a goal by Joël Teasdale at 9:47 to tie the game at one apiece.

Halfway through the second, Bobby McMann scored a power-play goal at 11:33 to regain the lead for Toronto and make it 2-1.

In the final period, Toronto added another goal by Alex Steeves at 4:11 to extend their lead to two. Steeves has 31 points (12G, 19A) in 33 games so far this season. Shortly after, Laval responded with a goal by Gabriel Bourque at 5:21 to keep the Rockets within one. Later, Bobby McMann scored his second of the night at 10:08 in the frame, making it 4-2 for Toronto. McMann’s goal marked the 4000th goal in Marlies franchise history. McMann has points (5-4-8) in six consecutive games.

Joseph Woll stood tall in the Marlies crease stopping 56 of the 58 shots he faced. He is currently 8-0-0 this season.

The Marlies return to action on January 11th when they host the Manitoba Moose for two games straight. Puck drop is at 7:00pm on the Toronto Maple Leafs app and AHLTV.

On the team’s effort in today’s win:

Not where it needs to be. Laval’s been a great team all year. One of the better teams offensively and defensively in the entire league, let alone in our division. We should have given Woll a better effort.

On today’s win:
I thought Bobby McMann has a great game today. Not only in scoring but doing some heavy lifting for us and driving the game and helping us get out of our end which we spent a lot of time in. Power play and goaltending were key for us today.

On today’s game:
(Laval) is a team that throws everything on net. It’s easy to look at the shots and think that we might be getting dominated. We weren’t happy with our first period, but we responded pretty well in the second and third. You can’t read too much into the shots because that’s their style of play but in terms of playing style at this point, we know what they do. They’re a good team who works hard but we’re good too.

Joe’s great. He didn’t have a minute off tonight because just as I said before, Laval throws everything on net and they had some good scoring chances. He’s the ‘Brick Woll’ back there. All three of our goalies are super talented but Joe is really riding hot right now. It’s fun to watch and we just have a ton of confidence playing in front of him.

The Toronto Marlies close out the weekend with a home game against the Laval Rocket on Sunday evening. This marks the third of eight matchups between the two clubs this season. Currently, Toronto has won both previous matchups.

The two teams last met on November 4th when Toronto won 5-4 in overtime. Toronto currently sits atop the North Division standings in first place with a 21-9-1-1 record, while Laval sits in fifth place with a 13-15-4-1 record.

Toronto heads into Sunday’s game with a 5-4 shootout win over the Lehigh Valley Phantoms on Saturday, while Laval is coming off a 5-4 overtime loss to the Manitoba Moose on Friday.

Puck drop is at 4:00pm on the Toronto Maple Leafs app and AHLTV.