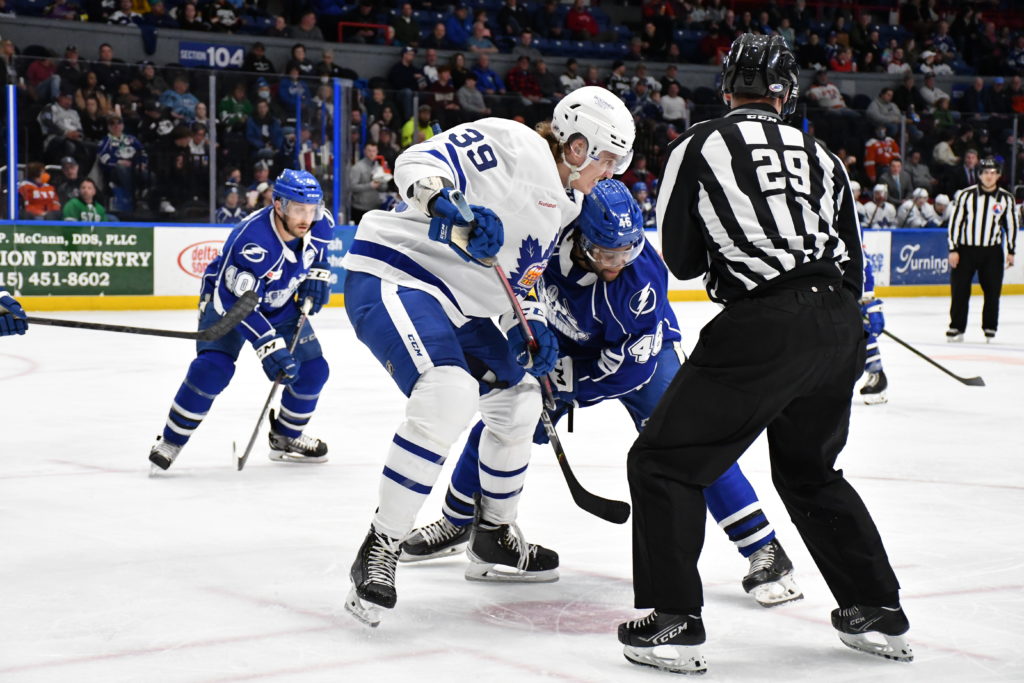 The Toronto Marlies fell 5-1 to the Syracuse Crunch on Saturday night. The two teams split the season series, winning two games each.

In the first, Charles Hudon got the home side on the board first, and gave them a 1-0 lead into the first intermission. In the second, Syracuse continued to bring the offence. Hudon scored his second of the game, and Nick Perbix added another for the home team. Mikhail Abramov managed to cut into the Syracuse lead before the frame was over, but the Crunch still held a 3-1 lead after 40 minutes.

In the final frame, Hudon tallied his third of the game, while Daniel Walcott added another en route to a 5-1 victory.

The Marlies return to action on Wednesday when they visit the Belleville Senators. Puck drop is at 7:00pm ET.

There wasn’t a lot of opportunity to start the first period at either end of the rink. I don’t know if it was feeling each other out in a really important game for us to be in and them too. It’s a really tight race in the division. They made it really hard on us to find ways to get on the inside in the offensive zone, they protect the net really well, they get in shot lanes and make it hard for us to get off the wall and get inside. We did get stronger as the period went on. I thought we did have a push there in the second half but we fell short. It was a tough game for us to get going and find momentum. Hutchy did a really good. [The goaltender change] was more just a shift in energy and something within the team to get them going and spark them. It definitely wasn’t on his play.

On Marc Michaelis leaving the game in the second period:

I don’t have a definition as to what the results are. He definitely had head contact there so, we kept him out and we’ll talk to our medical staff and see where he sits.

On heading into the final six games of the season:
The shorter memory we have the better. We can’t linger too long on what this game was and feel bad for ourselves. We have to be ready to go because every game right now is so important.

On playing for their teammates:

Right now, we’re pissed off but we’re going to bring that energy and take it straight to Belleville, that’s the plan.

The Toronto Marlies are back on the road for a Saturday matchup with their divisional rivals, the Syracuse Crunch. The Marlies close out the 2021-22 regular with seven straight divisional matchups. The two teams last met in Toronto on April 6th, where the Marlies won 4-3. The Marlies hold the edge in the season series winning two of the three games so far.

The Marlies are coming off of a 4-1 win over Hartford on Friday night. Syracuse fell to Utica on the road on Friday 5-1. Both teams have won three of their last five games.

Some players to watch on the Marlies side include rookies Bobby McMann and Alex Steeves. Both are currently tied for the team lead in goals with 22, and are just two goals away from the Marlies all-time rookie goal scoring record (24). Joseph Blandisi and Nick Robertson both have points in five consecutive games, and Brett Seney leads the team in points with 52. On the Syracuse side, Gabriel Dumont leads the way with 56 points.