Marlies Fall To Laval In Shootout 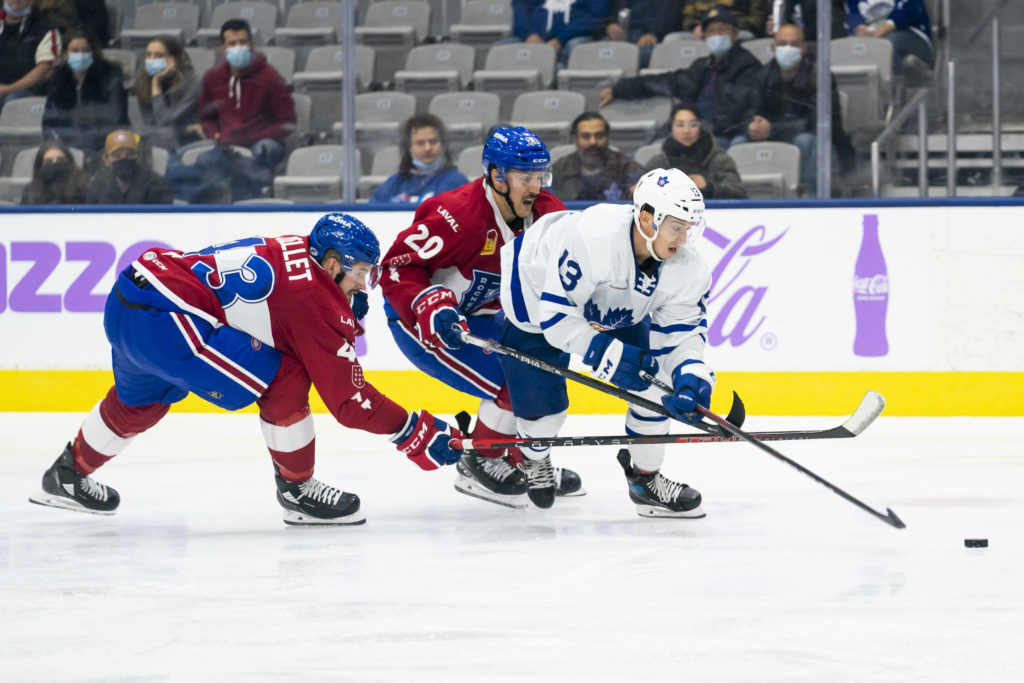 The Toronto Marlies winning streak came to an end on Wednesday, as they fell 6-5 to Laval in a shootout.

The Marlies got off to a hot start, as Brett Seney opened the scoring just over five minutes in. Josh Ho-Sang added another midway through the first, then Rafaël Harvey-Pinard brought the Rocket within one before the intermission.

The Marlies didn’t let up, adding three more in the middle frame, courtesy of Seney, Joey Anderson, and Semyon Der-Arguchintsev. Gabriel Bourque added one more for Laval before the end of the middle frame.

But, Laval’s forecheck was relentless, as Louie Belpedio, Lukas Vejdemo, and Cole Caufield all found the back of the net in the final frame to tie the game at five and send the game to overtime.

Neither team managed to breakthrough in the extra frame, so a shootout was needed. Both goalies stood tall in net, until the ninth round, when Harvey-Pinard managed to get one past Michael Hutchinson for the win.

The Marlies look to get back in the win column on Saturday when they host the Lehigh Valley Phantoms at 4:00pm at Coca-Cola Coliseum.

On tonight’s game:
It’s tough because we did a lot of good things in the first half. We accomplished everything we wanted to set out with our start, we played the way we wanted to play. We definitely got comfortable once we got the lead. It’s going to be a good lesson for our group. This is a tough league, that was a tough opponent, especially a rival opponent. We really just left too much time and space for them as the game went on.

On the third period:
We just took our foot off the gas. I think we came out there and played two periods exactly how we wanted to. We had the game in our hands and it was just bleh. The third period was just kind of empty from us, and then we leave Hutchy out to dry there. The breakdowns we had obviously led to pucks in our net. It’s just not acceptable to come out after a period like that.

The Toronto Marlies return home to face the Laval Rocket in the first of three home games this week.

The two divisional rivals meet at Coca-Cola Coliseum for the first time this season. In their previous meeting in Laval earlier this season, the Rocket were victorious, shutting out the Marlies 5-0. The Marlies will be looking to flip the script on Wednesday night.

The two teams are very close in the standings. Toronto holds a slight edge with 14 points, compared to the 13 that belong to Laval.

The Marlies come into Wednesday’s game riding a two game win streak, after winning back-to-back games in Chicago last weekend. The Rocket lost to Utica in their most recent game 5-3.

Some players to watch in this Wednesday matchup include Josh Ho-Sang, who currently leads the team with six goals and eight points. As well as, Semyon Der-Arguchintsev, the Marlies leading rookie, who scored his first two goals of the season last weekend, including the game winner on Sunday.  On the Rocket side, Laurent Dauphin leads the way with 12 points.

Puck drops at 7:00 PM EST on Leafs Nation Network and AHLTV. Fans can also follow along on Twitter (@TorontoMarlies) for game updates.