Marlies Fall To Senators In Battle Of Ontario 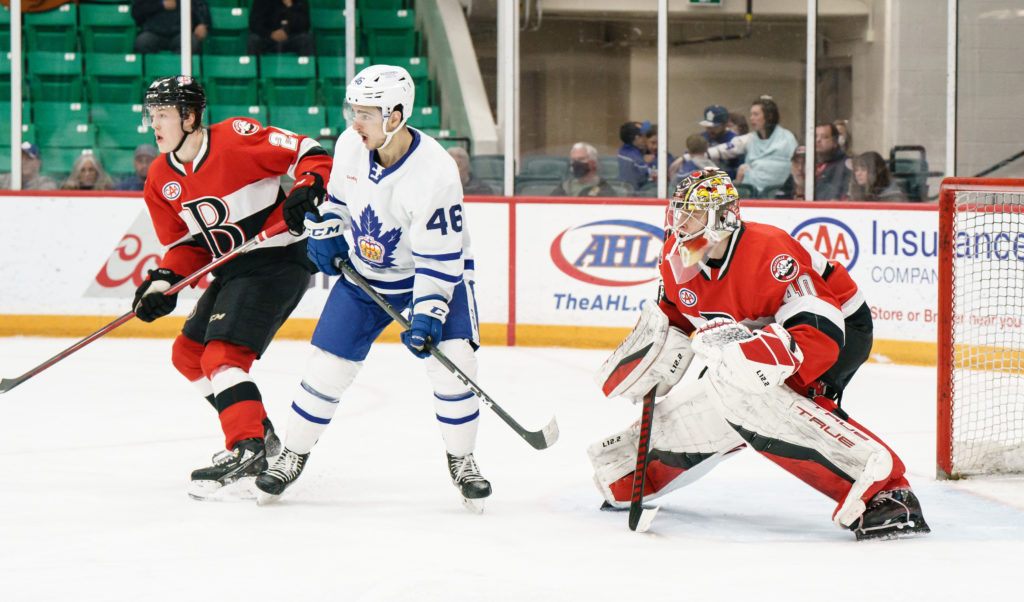 The Toronto Marlies fell 5-4 to the Belleville Senators on Wednesday night. The Marlies are now 6-3-1-0 against the Sens this season.

In the first period, Joey Anderson making his return to the lineup after missing seven games with a concussion, scored his 21st of the season on the power-play to get the visitors on the board first. Brett Seney followed up with his 17th of the season later in the frame, and the Marlies took a 2-0 lead into the first intermission.

In the second, Viktor Lodin got the Sens on the board just under four minutes in. Mark Kastelic and Cole Reinhardt both found the back of the net later in the frame, to give the Senators their first lead of the game. But, with just three seconds remaining, Nick Robertson scored his 13th of the year on the man-advantage to tie the game before the intermission. Robertson extends his point streak to seven.

The Marlies return to action on Friday when they head to Laval for a tilt with the Rocket. Puck drop is at 7:00pm ET.

Given the circumstances where we are in the season, how important this game was, the results are really tough to swallow right now. First period, we had a great start. Thought our team came out the right way and were emotionally charged and playing hard for one another. Second period, they became more physical, got us stuck in our defensive half of the ice for a good chunk of that period and then special teams, our power play got us momentum coming back, going into the third and we got back to our game and found our way through the neutral zone a little better there in the third. We got back to it to finish off was a good push, but the results are disappointing.

I thought he looked really good. He just got here a couple of days ago, jet lag, gauntlet of things he had to do to prepare and get ready for today. He held his own and did a really god job and added to our team. You can see how responsible he is and how smart he is in tight spaces with the puck.

On what needs to be done against Laval for a victory:

For the most part, what we did today. Get off to a good start, have the first period like we did in today’s game and try to keep that momentum going into the second period but the process, the effort, the team was in the right mindset today.

The Toronto Marlies head down the highway to face the Belleville Senators in a mid-week battle of Ontario. The two teams last met back on February 19th when the Sens won 5-4 in overtime. The Marlies are 6-2-1-0 against Belleville so far this season. The two teams meet three more times in the regular season.

Belleville has been hot as of late, winning four straight games. The Marlies will look to put an end to Belleville’s winning streak on Wednesday, as they look to make a final push for the playoffs.