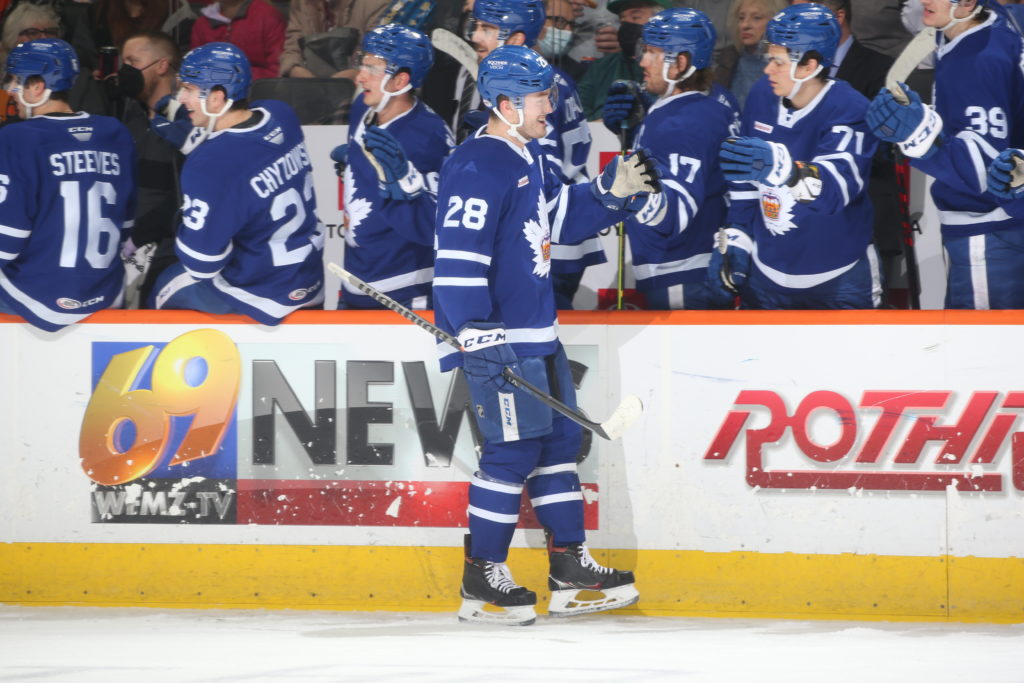 The Toronto Marlies extended their winning streak to six games after defeating the Lehigh Valley Phantoms 4-3 in overtime on Sunday.

In the first period, Joey Anderson, making his return to the lineup, got the visitors on the board first with his 11th of the season. But the lead was short-lived, as Brennan Saulnier tied it up just 42 seconds later. But, Anderson added another before the first period came to an end, giving the Marlies a 2-1 lead after the first 20.

In the second, Wade Allison scored the only goal of the middle frame just 1:12 in. The game remained tied at two after the second frame. In the third, Alex Kile gave the Phantoms a 3-2 lead that they held until Brett Seney, also making his return to the Marlies lineup, tied the game at three with his 13th of the season. For the second straight game, 60 minutes was not enough so overtime was needed.

In the extra frame, Joey Anderson completed the hat trick and sent the Marlies home with a win after scoring his 13th of the season.

Brett Seney picked up four points in Sunday’s game, contributing to each of the Marlies four goals. Erik Källgren stood tall in the Marlies net, stopping 22 of the 25 shots he faced.

The Marlies road trip continues on Wednesday when they head to Hartford for a battle with the Wolf Pack. Puck drop is at 7:00pm ET.

On managing emotions in the third period

There was definitely a response from our group after the hit on Ho-Sang in a positive way. The emotional charge where you don’t want to see one of your own members of your group go down like that. Just the pure will and determination to have a response, to find some offence, to find a way to win the game for Ho-Sang was really good to see from the group.

On Joey Anderson and Brett Seney:
Their energy and their take-charge mentality of the direction they want the game to go in, to push and drive the team to go in a certain way. They led by example on the ice. With the goal that Anderson had and Seney coming up big with a puck to the net that went off Chyzowski, they added a lot to our game today. Can’t say enough about the way they conduct themselves and how they lead this group.

On coming back to the Marlies:

It’s great. I was excited to see all the guys today. It was a fun game. We battled some adversity and it was one of those games where we’re going to come together as a group from it. It was good to be around all of the guys.

On Toronto’s response in the third period:
A bad hit we thought on (Ho-Sang), no call and then they come back and score right away. Guys were frustrated. We did it clean though. Guys weren’t taking dumb penalties after that. We just kept trying to piece away at it. We found a goal in regulation and got it to overtime and were able to capitalize on the power play to finish the deal.

On Toronto’s response in the third period:
Obviously what happened with Josh (Ho-Sang), we didn’t appreciate. We thought it was a play that could have been a call. We decided the best way to get back at them was to put the puck in the net and get back in the game. Obviously, it wasn’t the response we originally wanted with them scoring but I thought our group dug deep up and down the lineup to get into overtime there and then finish the job.

I love playing with the guy. He’s one of my good buddies off the ice. I can’t say enough good things about him. It’s always great to see him get rewarded.

On the overtime winner on the power play:

We’ve got to give a lot of credit to our PP coach, Snacks (AJ MacLean), who drew up a play for us and Steeves and Duszak executed there at the top and Joe’s there to put in the garbage.

The Toronto Marlies road trip continues as they head to Allentown, PA for a tilt with the Lehigh Valley Phantoms on Sunday afternoon. The two teams met at Coca-Cola Coliseum back on November 20th, where the Marlies came out on top with a 3-2 overtime win.

The Marlies are currently riding a five-game winning streak. They are coming off of a 4-3 overtime win in Hershey on Saturday night. Meanwhile, the Phantoms are playing their third game in as many days, after splitting a two game home-and-home series with Wilkes-Barre Scranton on Friday and Saturday.

Some players to watch on the Marlies include Alex Steeves, who scored the second goal and the overtime winner in Saturday’s game against Hershey. Steeves has points (4-1-5) in his last four games and is tied for third overall in goals (11) amongst AHL rookies. Defenceman Filip Král has points (2-4-6) through four consecutive games, and has 13 points (2 goals, 11 assists) in 26 games with the Marlies so far this season. On the Phantoms side, Adam Clendening leads the team with 19 points.

Puck drops at 3:05 PM EST on AHLTV. Fans can also follow along on Twitter (@TorontoMarlies) for game updates.