Marlies Back In Win Column After 5-2 Win Over Belleville 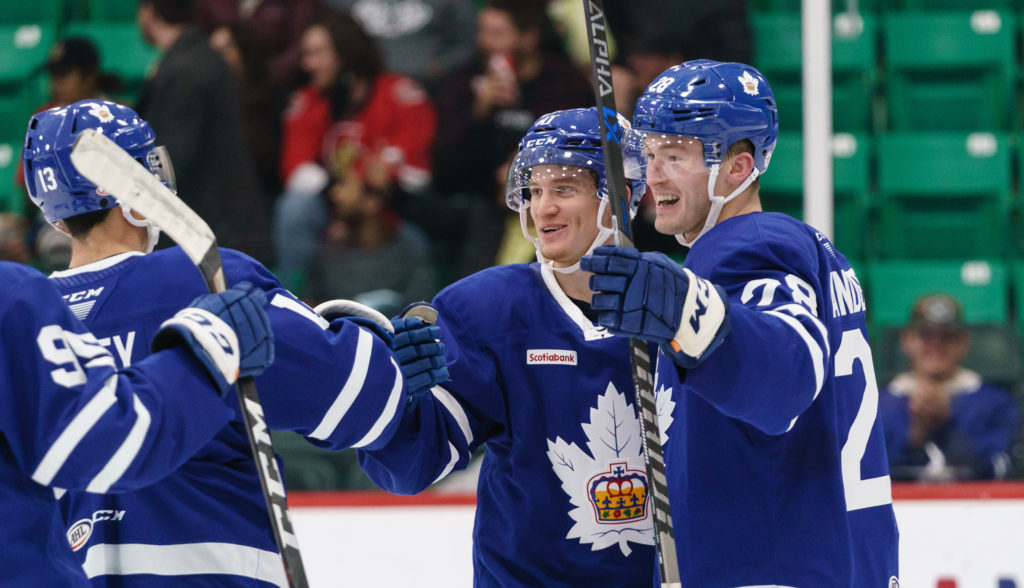 The Marlies found themselves back in the win column after a convincing 5-2 victory over the Belleville Senators.

Things started off close between the two teams, with both sides refusing to budge in the opening frame. Mac Hollowell got things started for the Marlies offensively, scoring his first of the season just under halfway through the second period. Josh Ho-Sang added another for the visitors before the frame was over. The Senators managed to get one back before the intermission, but the Marlies held onto a 2-1 lead after 40 minutes of play.

In the third period, Brennan Menell scored his first of the season early in the frame, but Belleville responded with another just over a minute later, to once again pull within one. But it was all Toronto after that. Josh Ho-Sang tallied his second of the night, and just 11 seconds later, Joey Anderson found the back of the net, to give the Marlies a 5-2 lead. That score would stand as final.

It’s a quick turnaround for these two teams, as they meet once again on Saturday afternoon back in Toronto at Coca-Cola Coliseum for a 4:00 pm puck drop.

On Alex Steeves’ AHL debut:
Great. He brought a ton of energy. We’ve been eager to see him in and he’s been chomping to get in the lineup and start playing with us. He has a really good shot, a really good scoring touch. His competitiveness and work ethic is some of the best we’ve seen. It’s been a little bit of a long road since his injury and the reason he can have such a big impact in the first game back is because of how much work he put in in his time off.

On the defence:
I thought all six of our D played really well tonight. They were smart with where they were positioning themselves around the rink, making sure we stayed above their speed and their guys that are trying to take off in behind us. Their puck play was simple, efficient and at the same time creative. D don’t have to be flashy. They just have to be really smart with their reads and we have really smart D who read the puck fast because of their skillset.

On tonight’s game:
Commitment to structure. We got a little loose last game and also just having a better start. Going down early in the last game, we knew we had to change that. Staying out of the box too. I think we won the special teams game. That’s a huge component in why we won. We just knew that we had to have a bounce back game to get back in the win column.

On his first game:
It was awesome. Admittedly, there were times where I was a little heavy of breath. Ultimately, I just wanted to help the team win today and am super excited we got a big win.

On the team’s win:
(Källgren) played really well in net which is always huge. There was a bigger commitment then I’ve seen most of the year of guys just willing to put it behind the defencemen and go get it, playing the right way to get offence and we were opportunistic at the right times.

The Toronto Marlies are back on the road for the first half of a home-and-home against the Belleville Senators. This will be the first of 12 meetings between the two this season.

The Senators had the Marlies number last season, picking up the win in six of their 8 meetings. The Marlies will be looking to flip that script this season. The last time these two teams met was on May 20th, 2021, when Toronto topped Belleville 6-3. The Marlies are coming off of a tough 5-0 loss to Laval on Wednesday, while the Senators are riding a 7-3 win over Rochester.  Both teams have identical 2-3-0 records entering Friday’s game.

Kirill Semyonov leads the way in points on the Marlies side with five. On the Senators side, Jake Lucchini also leads the team in scoring with five points.

Puck drops at 7:00 PM on AHLTV. Fans can also follow along on Twitter (@TorontoMarlies) for game updates.