Marlies Take Both Games In Back-To-Back With Belleville 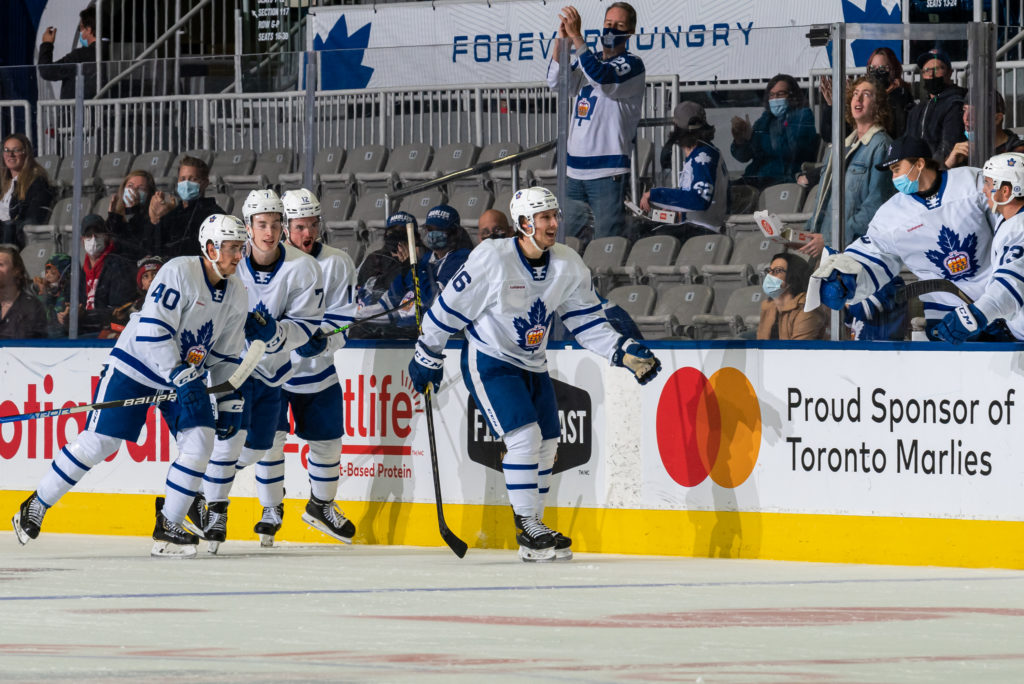 The Toronto Marlies complete the back-to-back series against the Belleville Senators with another 5-2 win on Saturday evening.

The Marlies came out firing in the opening frame, putting 15 shots on goal. Kristiāns Rubīns broke through for the home side scoring his first of the season, and giving the Marlies a 1-0 lead heading into the first intermission.

Just under halfway through the second period, Alex Steeves potted his first professional goal, with a highlight reel shorthanded breakaway tally. The Senators responded with goal from Mark Kastelic shortly after, making it 2-1 at the break.

The Marlies never let up and continued to add to their total in the third. Steeves added his second of the game, while Josh Ho-Sang and Bobby McMann both scored one apiece. Joseph Woll stood tall in the Marlies net, stopping 20 of the 22 shots he faced.

Toronto are back on the road for the next four games. They will be stopping in Rochester on Friday night, heading to Utica on Saturday, then heading down to Chicago the following weekend for a back-to-back with the Wolves. The Marlies next home game is November 17th at 7:00pm ET.

On the team’s structure:
They’re starting to buy into it. They’re starting to see how it works and much like most teams, you’ve got to rely on each other. All five guys on the ice have got to play their role and do their part to make sure that we’re protecting ourselves defensively but ultimately it helps us create more offence when we can get pucks back faster, transition quicker and use all five guys inside of that. What’s really been impressive with this group with the game in Laval with how challenging of a game that was and how much adversity we went through as a group, a lot of teams could have very easily just folded in, given up, started pointing the finger, brought negative energy or a poor me attitude coming into the weekend but we have a lot of good leadership, a lot of good guys in this room and for them to step up in these two games and have a response like we have in the way we played, it shows a lot of good signs with the group that we have.

On the key to consecutive wins:
The three games in four days, it’s not easy to play at this pace and in this league to sustain a high tempo and play as fast as we do in that many games in a short amount of time. Managing our shifts, managing our workload, being able to use our entire bench and trust everybody in all situations really helps us do that and that showed in these last two games.

On Alex Steeves’s contributions to the lineup:
He’s brought a lot to our team the last two games. Not only goal scoring obviously but all the little things that help win hockey games – his work ethic, competitiveness, his ability to make plays with the puck, game management items. He’s come in early here and led by example.

On the team’s structure:

Our structure is all based off of being aggressive and wanting to get the puck back so, we can attack. You can’t attack and get the puck without playing an honest game and having a high F3 who’s working his butt off to get back. We have a lot to feel good about. We stayed disciplined, we stayed with the game plan and that’s why we won.

The Marlies and Senators are back in Toronto to wrap up the second half of a home-and-home series.

On Friday night, the Marlies came out victorious with a 5-2 win. Josh Ho-Sang scored two goals for Toronto, while Brennan Menell, Mac Hollowell and Joey Anderson each added one of their own, while Erik Källgren stood tall in net, stopping 26 of the 28 shots he faced.

The Marlies will look to keep that momentum heading into Saturday’s game in front of a home crowd at Coca-Cola Coliseum. Some players to watch for the home side are Josh Ho-Sang and Brett Seney, both have four goals each so far this season. On the Senators side, Jake Lucchini leads the team in points with five.

Puck drops at 4:00 PM on Leafs Nation Network and AHLTV. Fans can also follow along on Twitter (@TorontoMarlies) for game updates.