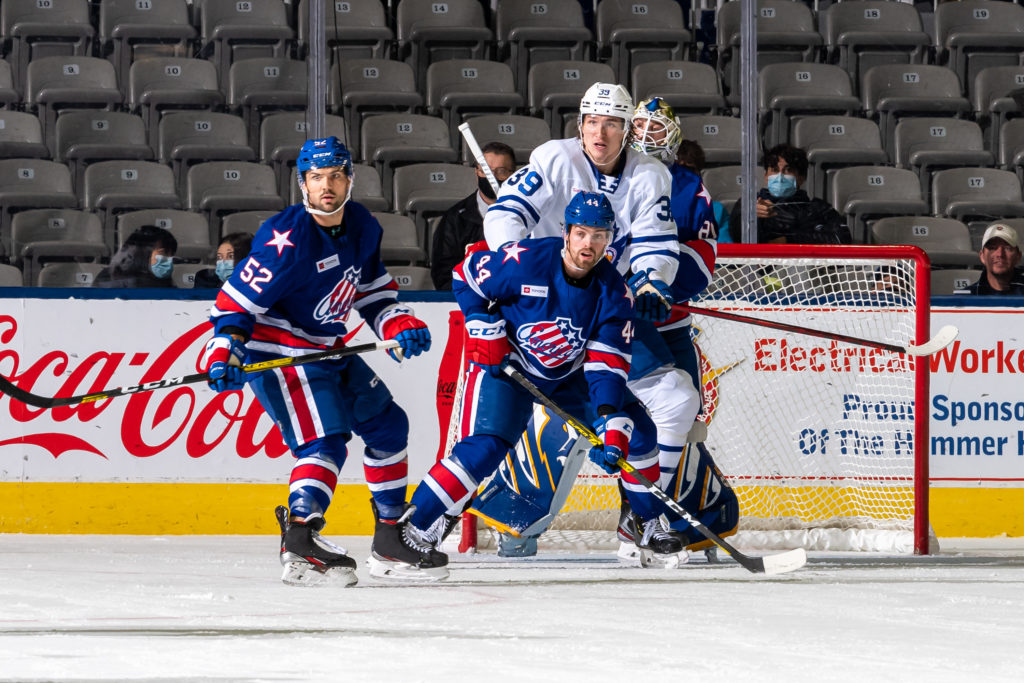 It was a rough evening for the Marlies on Saturday, as the Americans went home with a 7-3 victory. Rochester came out flying scoring two goals in the first four minutes to take an early 2-0 lead. The Marlies didn’t let up though, as Brett Seney responded with a goal of his own to pull the home side within one.

Ryan MacInnis and Jack Quinn both added another one for the visitors, while Seney tallied his second of the night before the first period came to an end.

Kirill Semyonov notched his first career AHL goal in the second, once again cutting the deficit to one. But, the visitors kept coming, adding three more goals before the game was over, bringing their total to seven. The Marlies put 30 shots on goal, but couldn’t find a way to cut the deficit.

The Marlies will look to get back in the win column as they host the Cleveland Monsters for the second half of a back-to-back on Sunday.

To start the game, some good life, some good jump. The guys did a good job sticking to the game plan early. We generated some good scoring chances; we had a lot of momentum going. A couple of unfortunate bounces. The real positive takeaway early in the game was even with the goals against, the bench stayed positive. Their process today was much better than it was even last weekend early on in the game and even in the second, we found a way to generate momentum, start fighting back. The early goal in the third, you can tell the bench deflated a little bit. It’s tough looking at these games. You look at the final result and it’s definitely not good enough and not a result that we want to have. If we’re comparing last weekend and how we came out for the first half of this game, there was much improved gameplay for our team. So, we’re going to stick to some of the positives here at the beginning. Tomorrow is another big opportunity for us, and you could tell this one stings. These two last losses were big, and we need to make sure that when we’re coming to play and we’re generating offence, there’s got to be more structure to our offence. It’s a little loose right now and we’re going to tighten it up and make sure that we’re putting ourselves in a good spot offensively and defensively, not just offensively.

Really impressive. His work ethic, the way he thinks the game. For someone his size even at this level, he doesn’t just rely on soft skill. He works hard, he helps get pucks back, he puck pressures. It’s just easy to read off of him. He’s just doing everything the right way and he gets rewarded for it, for playing the right way.

The Toronto Marlies are back at Coca-Cola Coliseum for the first of two games at home this weekend. The Rochester Americans are in town for the first of six meetings between the two division rivals this season.

The two teams haven’t met since February 8th 2020 when the Marlies shutout the Amerks’ 4-0. Joseph Woll stood tall in the Marlies net that game stopping all 38 shots he faced.

The Marlies are coming off a disappointing 5-0 loss to the Moose on Sunday, they will be looking to get back into the win column. Rochester is playing the second half of a back-to-back Saturday, coming off of a 5-3 win over Syracuse on Friday night. Both teams are currently 1-1-0 so far this season.

On the Amerks’ side, Jack Quinn has been a player to watch, with four points in the teams’ first two games. For the Marlies, Kirill Semyonov leads the way with three.

Puck drops at 4:00 PM on Leafs Nation Network, and fans across Canada can also stream the game live in the official Toronto Maple Leafs App. Fans can also follow along on Twitter (@TorontoMarlies) for game updates.