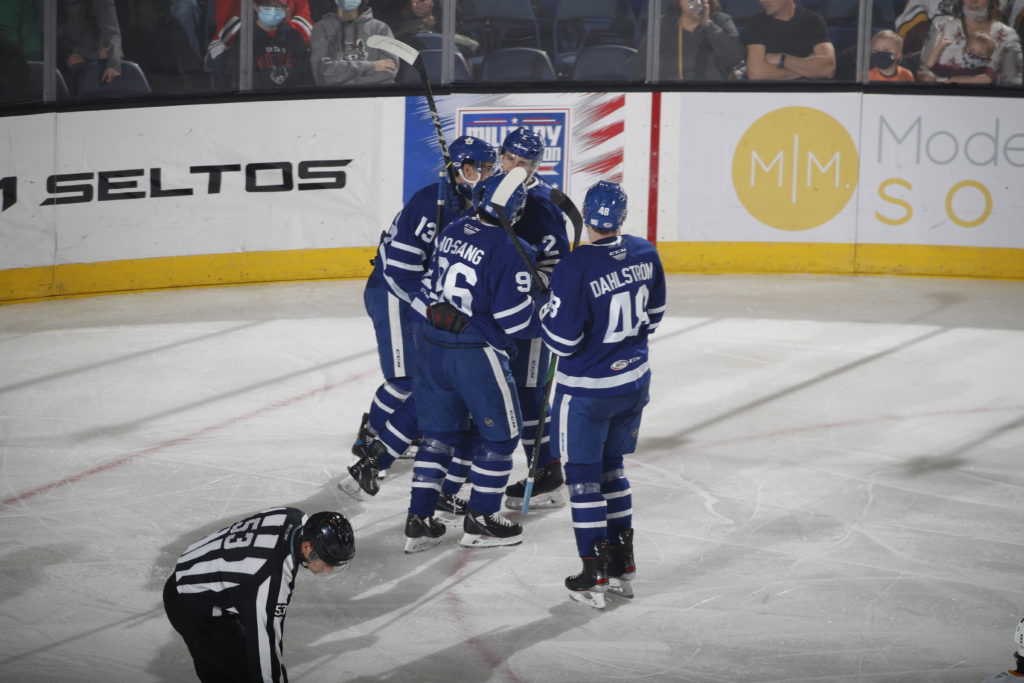 The Toronto Marlies started their weekend off on a high note, defeating the Chicago Wolves 5-1. The two teams meet again on Sunday afternoon for the second half of a back-to-back.

The Marlies got off to a quick start, as Bobby McMann recorded his second of the season just over two minutes into the opening frame, while Kurtis Gabriel tallied his first of the season a couple of minutes later. Chicago’s Sam Miletic cut the lead in half mid-way through the frame, giving the Marlies a 2-1 lead heading into the second period.

The Marlies offence continued to find the back of the Chicago net, as Semyon Der-Arguchintsev and Marc Michaelis both scored in the middle frame. Pavel Gogolev added one of his own early in the third en route to a 5-1 win.

Erik Källgren was fantastic in the Marlies net, stifling a red hot Chicago offence by stopping 38 of the 39 shots he faced.

On tonight’s game:
It was a weird game. First thing is we’ve got to stay out of the penalty box. That’s something we’re having to waste too much time and energy on talking with the group. In the long term, we can’t play sustained hockey and win games if we’re going to be in the box that often. The positive to that is how good our penalty kill did at eliminating opportunities. Snowden has done a heck of a job with those guys and preparing them, keeping them organized and really building a mindset of how they’re attacking and approaching that area of the hockey game. It was really good to see a couple of guys really spring offensively. The puck play hasn’t been a really simple or smooth thing for us to work through the last couple of games. At times when we did find our space and our offence, I thought our puck play was pretty good.

He’s getting the ice tilted. He’s a very strong skater. He plays to his strengths and that’s just simply driving his feet, getting depth into the zone. He sets up the whole team with his power and his strength of forcing the other team to come all the way back into their D-zone, stop in their spots. He sets up the O-zone for our team and establishes a presence at that end of the rink. He has a heck of a shot when he has the time and space to shoot the puck. That line today of McMann, Douglas and Gabriel had an awesome start for us. They were determined at the beginning of the game to make sure that we got things going the right direction and they put the team on their back today.

On tonight’s win:
I think we’re just focusing on our starts. It’s what Moore talked about pregame. Just trying to get a good start and play in the offensive zone and then good things happen usually. We’ve had a good week of practice and we followed that up in the game.

On his line with Curtis Douglas and Kurtis Gabriel:
Our game plan is just to skate, skate as hard as we can and try to turn pucks over. We know and have trust in the other guy that he’s going to be there to support you as that F2 and collect that puck if you’re first on it. Just trusting that that other guy is going to be there and giving your all.

The Toronto Marlies are in Chicago this weekend for back-to-back games against the Wolves. Chicago currently sits first in the Central Division with a 7-2 record, while the Marlies are 5-4 and sit fourth in the North.

This will be the first of four meetings between the two teams this season. The Wolves enter Saturday having won two in a row, while the Marlies are looking to get back into the win column after a 5-2 loss in Utica last weekend. Both teams are currently undefeated when leading after the first and second periods.

Some players to watch on the Marlies side include Josh Ho-Sang who has six goals in eight games so far this season. Toronto rookie Alex Steeves is also someone to keep an eye on, as he’s started off the season with five goals and six points in just four games. On the Wolves side, Andrew Poturalski leads the way with 15 points, followed by C.J. Smith with 13.

Puck drops at 8:00 PM EST on AHLTV. Fans can also follow along on Twitter (@TorontoMarlies) for game updates.