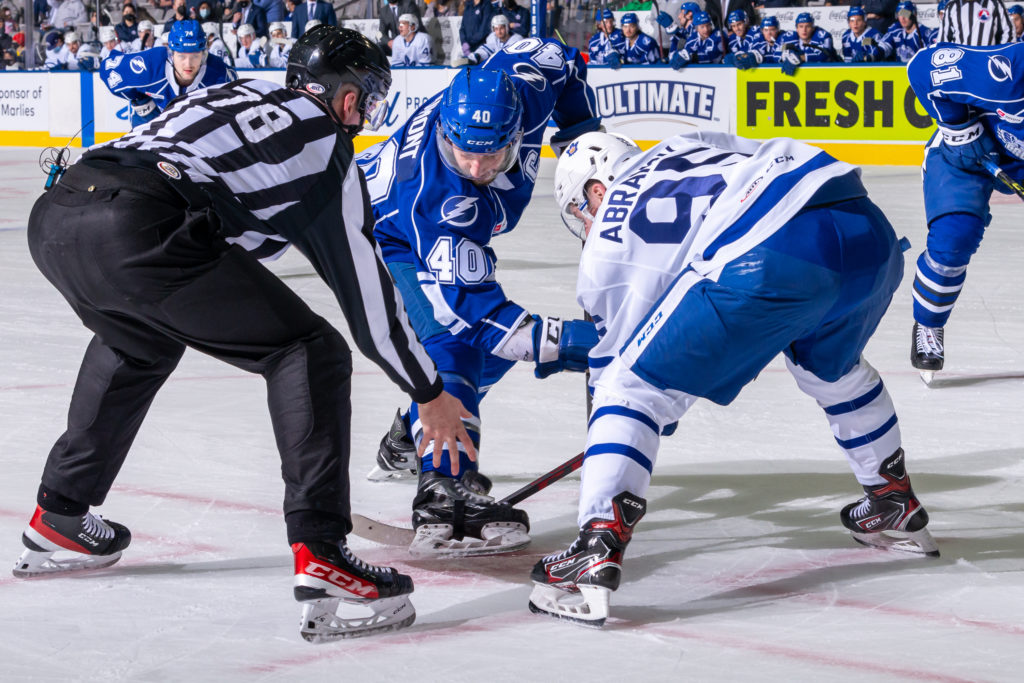 The Toronto Marlies fell 4-2 to the Syracuse Crunch on Wednesday night. They’re now 5-6-1-1 against North Division opponents this season.

The Crunch opened the scoring early in this one, as Remi Elie tallied one just over three minutes in and Shawn Element added another later on in the frame. But Bobby McMann broke through for the home side with one on the power play before the period was over, cutting the Syracuse lead in half before the first intermission.

In the second Cole Koepke extended the Crunch lead with his fourth of the season. Pavel Gogolev scored the Marlies second power-play goal of the game later in the second, once again making it a one goal game before the break.

But, in the third period, it was only Syracuse who managed to find the back of the net, as Remi Elie scored his second of the game en route to a 4-2 Crunch win. Erik Källgren made 28 saves in the loss.

The Marlies are back in action on Saturday as they head to Grand Rapids for two straight. Puck drop is at 7:00pm EST.

On tonight’s game:
I thought the chances were still pretty even for the most part throughout the game. The game could have gone either way. In the D zone we just needed a couple more blocks and shot lanes and boxing out the net front, but given the circumstances of the day and the guys kind of being thrown in the blender for the most part with the lineup and the lines, I thought everyone did an excellent job of finding their way today.

Obviously a very different lineup. A lot of different lines put together. As the first period went along, we started to do a lot of good things. With the shot totals at the end of the first you could tell that we found our legs and found some rhythm within ourselves and got some opportunities towards the net in the first.

On tonight’s game:
It was a bit of a tough start for us. That’s something that we’re working on and we’ve been battling with that this year. We just felt like we were behind the eight-ball from the get-go there and if we would have had a better start, I think we would have had a different outcome that’s for sure because I just felt like we were skating behind it and chasing it a little bit off the start and that’s not a way you want to start the game.

The Toronto Marlies host the Syracuse Crunch on Wednesday night, in the first of four meetings between the two teams this season. Toronto currently sits third in the North Division, while Syracuse sits seventh. The Marlies are 5-5-1-1 against North Division opponents so far this season.

The Marlies are looking to bounce back after losing two of three on the road last weekend, while the Crunch are coming off of a 5-3 loss to Charlotte on Saturday.

Some players to watch on the Marlies side, Josh Ho-Sang has nine goals and 15 points so far this season, while Semyon Der-Arguchintsev is the Marlies leading rookie scorer with 13. On the Crunch side, Gabriel Dumont leads the team with 18 points.

Puck drops at 7:00 PM EST on Leafs Nation Network, TSN, and AHLTV. Fans can also follow along on Twitter (@TorontoMarlies) for game updates.