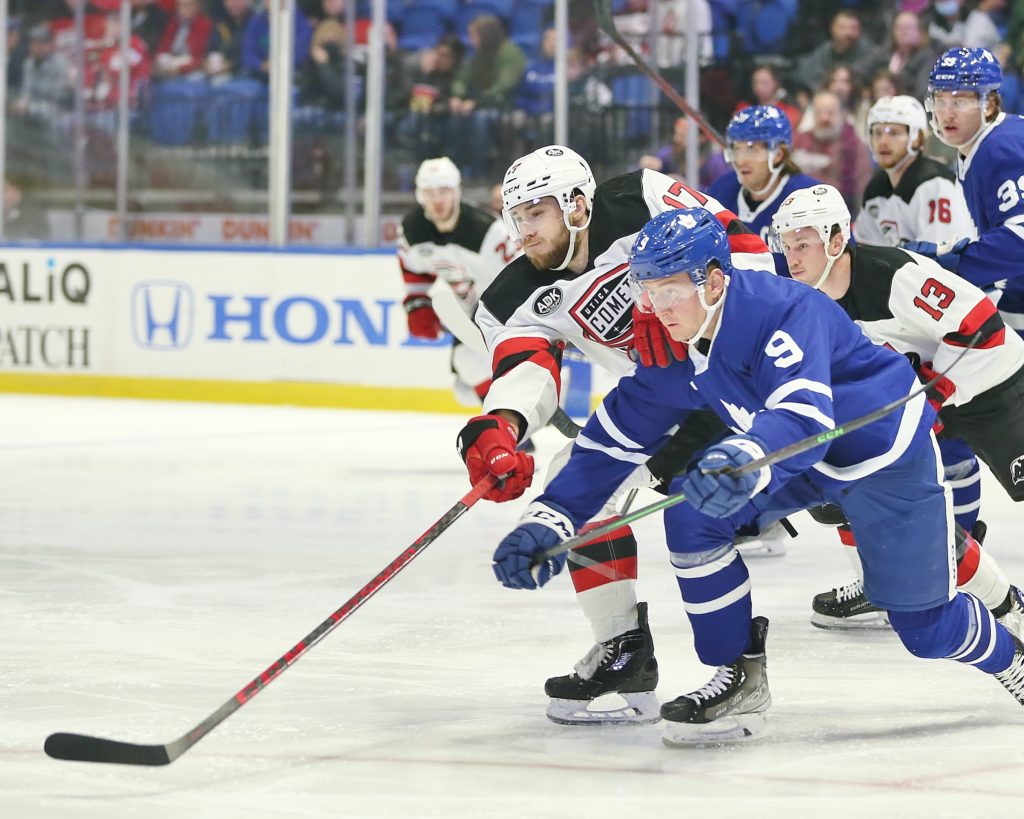 The Toronto Marlies split their two games in New York state, falling 5-2 to the Utica Comets on Saturday night.

The Comets came out firing, scoring just over five minutes into the first frame. But, the Marlies responded just 20 seconds later with one of their own from Alex Steeves. Both teams had plenty of chances, but the score remained tied at one after the first period.

Alex Steeves wasted no time in the second period adding his second of the game right as he came out of the penalty box. Unfortunately, that would be all for the Marlies as the undefeated Comets took over, scoring four more goals before the final buzzer. The Marlies put 26 shots on Comets’ goaltender Akira Schmid, but were unable to get more than two past him.

The Marlies will look to get back in the win column next weekend, when they head to the Windy City for a back-to-back series with the Chicago Wolves.
Game Notes:

On tonight’s game:
This loss stings a bit. I thought our team played a really good game. I think we had three or four posts in the second period and another one in the third. The team did a lot of good stuff. We found our game today. We had a great start, which is something we’ve been struggling with the team being ready at the beginning of the game. We started to get into some penalty trouble at the end of the first which is something that we’ve discussed a lot. We’ve got to make sure we clean it up out of our game because when we’re playing top opponents who are undefeated, we can play with them, we can win hockey games but if we’re going to continue to take penalties especially the stick infractions, it just puts us behind a little. Overall the effort, the compete, our offensive and defensive structure, the energy and just the whole process of how the guys played today was the right way. It was just one of those games. Sometimes you do everything that you can and the bounces just don’t go in your favour but we should feel pretty proud of how we played today.

On tonight’s game:
I think it was a good test for our group being in a high energy building like that. For the most part, we had a really solid game. A couple of bounces here and there could have gone the other way but for the most part, pretty happy with two points on the road and we just have to take what we have to get better at in this week in practice and execute next week.

The Toronto Marlies are in Utica on Saturday night for the second half of a back-to-back. The Marlies are coming off of a 4-1 win over Rochester on Friday, while Utica defeated Syracuse 6-3.

The Utica Comets are undefeated so far this season with a perfect 5-0 record. The Marlies sit third in the North Division at 5-3, and will be looking to continue their momentum, and put a stop to the Comets’ winning ways. The two teams have not met since February 28th 2020, when the Comets won 7-3.

Some players to watch on the Marlies side include Josh Ho-Sang and Kirill Semyonov. Ho-Sang has scored four goals in his last three games, with six overall so far this season. Semyonov leads the Marlies in scoring with eight points. On the Comets’ side, Chase De Leo leads the way with eight points for his team, and the Comets goalie tandem of Nico Daws and Akira Schmid have both been dominant so far this season.

Puck drops at 7:30 PM on AHLTV. Fans can also follow along on Twitter (@TorontoMarlies) for game updates.