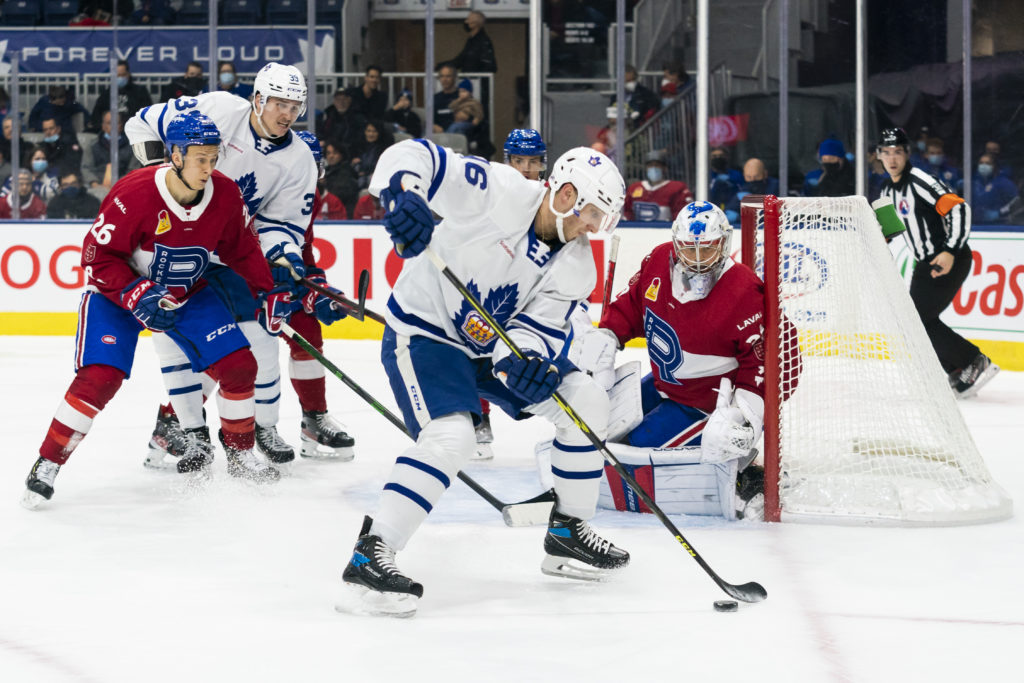 The Toronto Marlies fell 5-1 to the Laval Rocket on Sunday evening in their only game this weekend.

Laval opened the scoring early in the first frame with a goal from Danick Martel, giving the visitors a 1-0 lead at the first intermission. Then in the second, Jean-Sébastien Dea added another for Laval, but Brett Seney responded a few minutes later for the Marlies, scoring one of his own to cut the lead in half. Before the second was over, Brandon Gignac made it 3-1 for Laval.

In the final frame, Alex Belzile scored less than a minute into the period, while Jean-Sébastien Dea found the back of an empty Marlies net late in the frame. The Marlies had plenty of chances throughout the game, with 32 shots on net, but Cayden Primeau stood tall in the Laval crease stopping all but one.

The Marlies are back on the road next week for a 3-in-3 stopping in Springfield on Friday, Bridgeport on Saturday and Providence on Sunday. They are back home at Coca-Cola Coliseum on December 15th when they host the Syracuse Crunch.

Inconsistent. The last time we played them, we had a better start, we had a better first 40 minutes. It wasn’t until the 10-minute mark, the shots were 5-1 them and then we got our game. We found it in the second half, the last 10 minutes of the first period, we outshot them nine to nothing. Came out in the second period, started to get rolling again and then they score a couple and it felt like there was lack of passion, lack of response, lack of energy on the bench.

On what Laval does well against Toronto:

They’re an aggressive team, they pressure hard. So, if we’re not finding our way on our retrievals and our breakouts they make it hard for us and the way they crash the net, we talked about it before the game of how much we’ve got to protect the crease and in-and-around our goalie and it was too easy for them to get there tonight. They had a couple tap-ins there where we just weren’t strong enough and having numbers at our net.

On Mrázek’s performance:
Petr played well. He looked good, didn’t look like he was hesitant. I thought he gave us a great effort and kept us in the game and a lot of mistakes and reasons for the pucks going in the net were on us.

On how it felt to return to play following his injury:

It felt great. I haven’t played for a while and it’s good to get the action going and see the plays from the ice and how the game goes. So, happy to be back and happy to see the action.

On what he was looking to accomplish:

To make sure I settled in and see the play, be patient in the D zone and be aware of everything. Those things I’ve worked on in practice in more detail, but you know how it is, the game is always different.

The Toronto Marlies host the Laval Rocket in their third of eight meetings this season. The Rocket have been victorious in both of the previous two matchups.

The Rocket are coming off of a 4-3 overtime victory over Texas on Wednesday. Meanwhile, the Marlies last game came on November 27th where they defeated the Cleveland Monsters 4-3 in overtime.

The Marlies are 5-4-1-1 against North Division opponents and 0-1-0-1 against the Laval Rocket so far this season. Toronto will be looking for their first win against Laval on Sunday. In the last matchup between the two, the Rocket won 6-5 in a shootout.

Both Josh Ho-Sang and Joseph Duszak spoke on Saturday about the matchup vs. Laval. “They’re well coached and they stick to their system and their game plan” Ho-Sang said. “I think if we bring that same sort of intensity that we had at the start of the game for the first two periods and we take the lessons that we’ve learned and implement them, we’ll be fine.”

Duszak echoed his comments adding, “I thought the first two periods we played perfect almost… and then the last 20 kind of slipped away from us. But, if we’re able to turn those 40 minutes into 60 I feel like we’ll have success tomorrow.”

Puck drops at 4:00 PM EST on Leafs Nation Network, TSN, and AHLTV. Fans can also follow along on Twitter (@TorontoMarlies) for game updates.