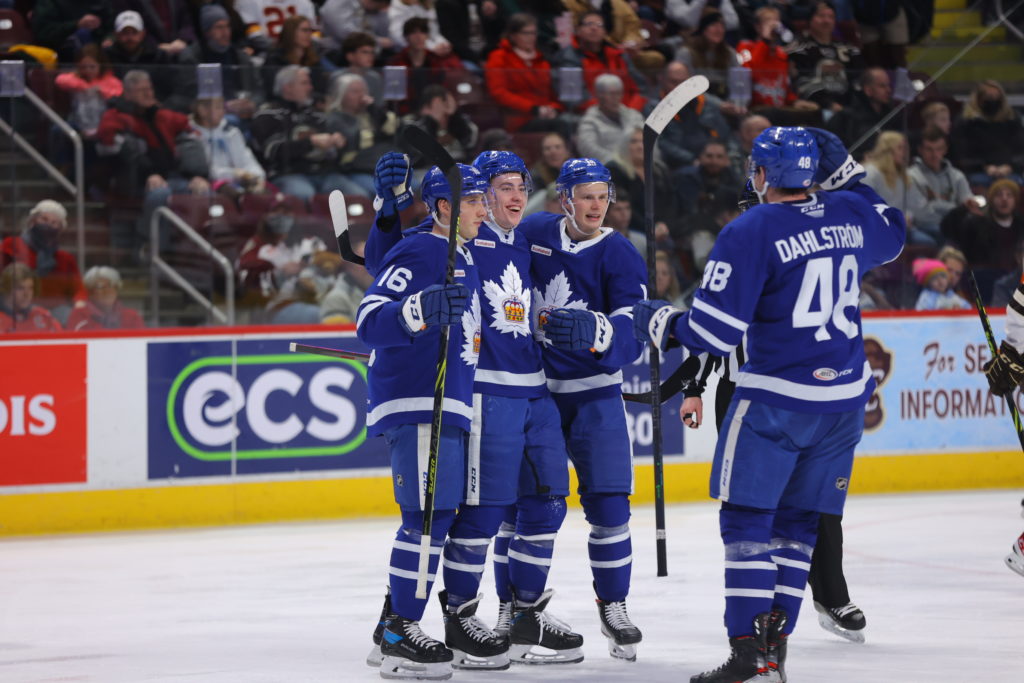 The Toronto Marlies extended their winning streak to five games on Saturday night with a win 4-3 overtime win against the Hershey Bears.

The Bears had a strong first period, putting 22 shots on net, and scoring one goal to give themselves a 1-0 lead after the first 20. In the second period, Filip Král scored his second in as many games to even the score. Garrett Pilon gave the home side the lead once again, but Alex Steeves tied the game at two just a few moments later.

In the third, it was the Marlies who took the lead, thanks to a power-play goal from Josh Ho-Sang early in the frame. The lead didn’t last long, as Tobias Geisser tied it up once again. The two teams remained knotted at three after 60 minutes so overtime was needed.

In the extra frame, Steeves tallied his second of the game just 1:21 in to give the visitors the win. Erik Källgren entered the game in relief of an injured Joseph Woll, and stopped 15 of the 16 shots he faced in the win.

The Marlies travel to Lehigh Valley for a clash with the Phantoms on Sunday. Puck drop is at 3:05pm ET.

On the team’s first period:

This is an extremely hard building to play in. Notorious for coming out with strong starts. They have a good crowd. We didn’t come out with the start that we have recently in the last few games. On top of them coming out strong and us being flat, we may it hard on ourselves. The guys were saying the right things in the first intermission and responded in the second.

On Joseph Woll leaving the game in the second period:
I think one of our defenceman accidentally collided into him into the side of his leg. He may have tweaked his knee a little bit. Well assess and have our doctors look at it and see what comes of it. It was a heck of a job for him up until that point. Really kept us in the game with how many shots there were and then for how hard it is for Källgren to come in cold off the bench and play the way he did and give us a chance to win the game is great.

On tonight’s game:
We felt coming out of the first period only down one was kind of a moral victory for us. I don’t think it was our best period. We had a really good talk in the locker room that started with the players and I think that helped us gather some steam and have a better second period, score a power play goal which was huge and then the overtime goal is good to pick up the extra point in a tough barn.

The Toronto Marlies open up their 10-game road trip Saturday night in Hershey. This is the first of two meetings between the two teams this season.

The Marlies head into Hershey riding a season-high four game winning streak. Their most recent win came on Wednesday when they defeated the Senators 4-2. Hershey is coming off of a 4-3 loss in a shootout against Bridgeport on Wednesday.

Some players to watch for on the Marlies side include defenceman Joseph Duszak who leads the team in points with 20, and Mac Hollowell who has eight points (1 goal, 7 assists) in his last seven games. On the Hershey side, Joe Snively leads the team with 31 points.

Puck drops at 7:00 PM EST on AHLTV. Fans can also follow along on Twitter (@TorontoMarlies) for game updates.