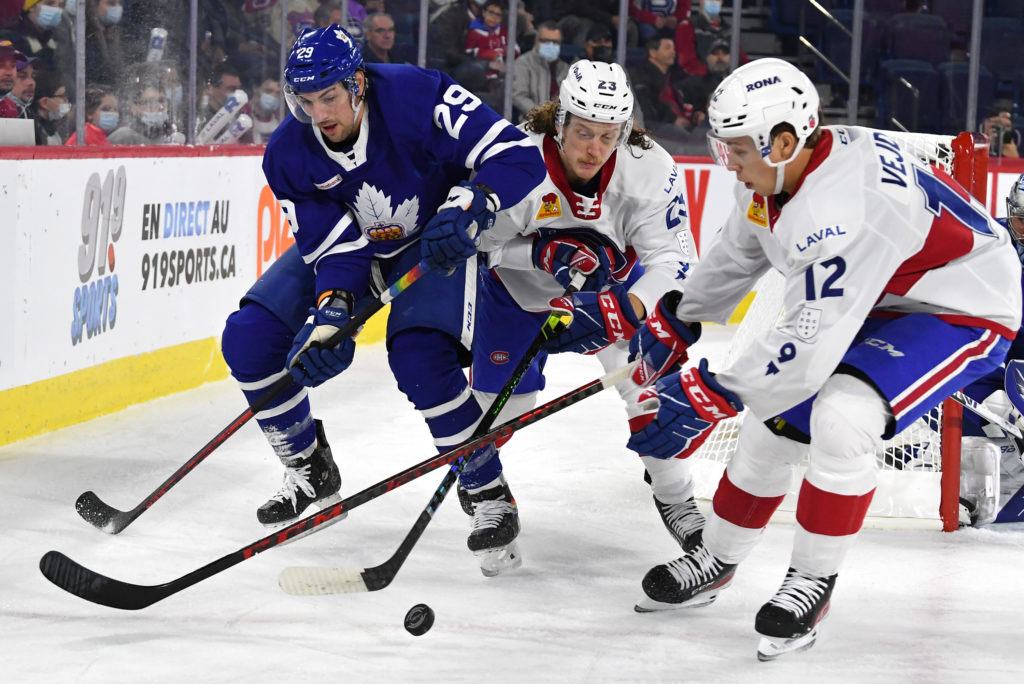 It was a rough start on the road for the Marlies, as they were shutout 5-0 by the Rocket at Place Bell on Wednesday night.

The Rocket came out flying in the first couple minutes, as Michael Pezzetta scored just before the two minute mark. They added two quick power-play goals later on in the opening frame to take a 3-0 lead into the first intermission. The home team didn’t let up, firing 18 shots on goal in the first, while holding the Marlies to only five.

Laurent Dauphin extended the Rocket’s lead to 4-0 early in the second period. Jean-Sebastien Dea would later add another for the home team. The Marlies struggled to generate good opportunities and found themselves down by five after 40 minutes of play.

The Marlies put 11 shots on goal in the final frame but couldn’t find a way to cut the deficit. Toronto was 7-for-9 on the penalty kill and was 0-for-4 on the power play.

The Marlies will look to get back in the win column on Friday when they visit Belleville for the first of two games against their divisional rivals this weekend.

On the tonight’s game:
There’s no need to hit the panic button right now. For us, it’s a really young team and we’re learning through a lot of different things. This was one of those steps and for sure, later in the season when you go through these adverse moments, it hardens you as a team, it makes you come together as a group. A lot of things to learn from tonight but it’ll make us a better group in the end.

On tonight’s game:
We had some adversity early in the game, gave them a pretty nice lead. We liked the effort from the group that was there. Guys were competing hard. As a group, we were happy with some of the steps that guys took as far their overall battle level for a full 60 minutes and there was no quit in the group. We stayed positive throughout which is important going forward. We’re going to have games like this so, we need to find a way to learn from it and take away some positives and not let this bleed into the room.

On what the team needs to focus on going forward:
It’s keeping things simple. It’s focusing on where we have success; it’s putting pucks in deep, it’s being on top of their guys, it’s making simple plays, getting pucks to the net, it’s forechecking. Unfortunately, today we didn’t have that at the start of the game but we didn’t’ quit. Our third period was a positive that we can build on. It’s just finding a way to start like that and continue through a full 60 minutes.

The Toronto Marlies hit the road for the first time this season, heading to Laval for a tilt with the Rocket. This will be the first of eight meetings between the two Canadian teams this season.

The Marlies had Laval’s number last season, picking up the win in six of their 10 meetings. The last time these two teams met was on May 17th, 2021, when Toronto shutout Laval 2-0. The Marlies are coming off of a big 3-2 shootout victory over the Cleveland Monsters on Sunday, while Laval was shutout 3-0 by Bridgeport in their last game.

Kirill Semyonov leads the way in points on the Marlies side. The birthday boy has five so far this season, and will be looking to add some more on his special day. On the home side, Laurent Dauphin is the top scorer with five points as well.

Puck drops at 7:30 PM on AHLTV. Fans can also follow along on Twitter (@TorontoMarlies) for game updates.