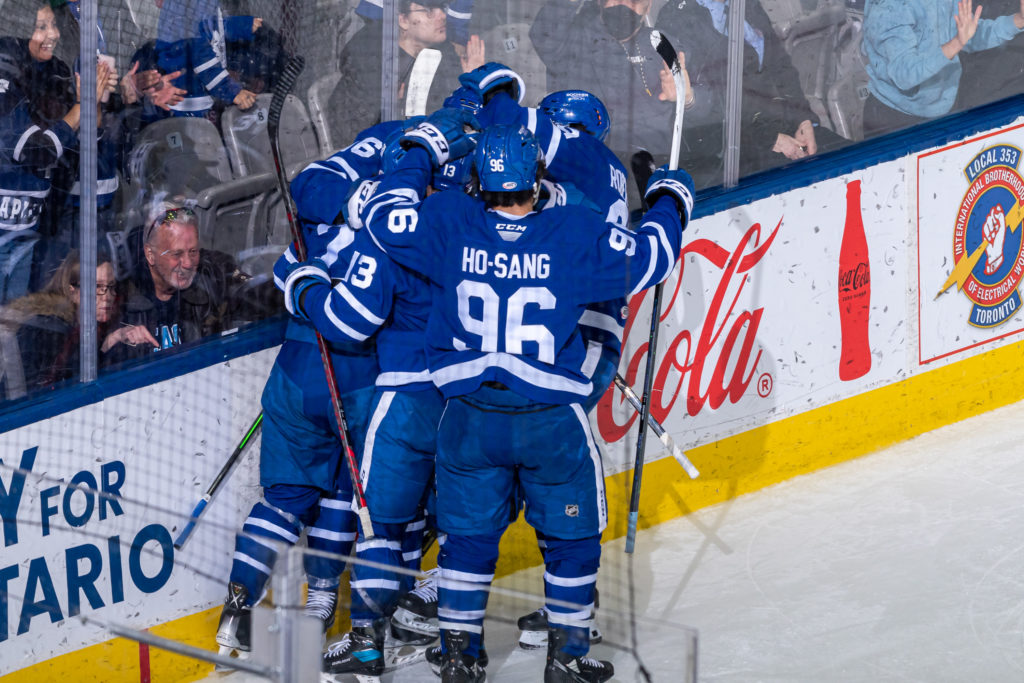 The Toronto Marlies defeated the Hartford Wolf Pack 4-1 on Friday night. The two teams split the season series, both winning one game each.

In the first period, Joseph Blandisi scored for the third straight game, tallying his 11th of the season. Both teams exchanged chances, but the Marlies maintained their 1-0 lead after the first 20 minutes.

Early in the second, Nick Robertson capitalized on a shorthanded breakaway opportunity to score his 12th of the season, and give the Marlies a two-goal lead. Anthony Greco managed to get one back for the Wolf Pack later in the frame on the power-play. But, Alex Steeves scored a power-play goal of his own before the frame was over, restoring the Marlies two-goal lead.

In the third period, both teams pressured hard, but it wasn’t until late in the frame when Bobby McMann sealed the deal for the home team, finding the back of an empty Hartford net for his 22nd of the season. Rookies McMann and Steeves now both lead the team in goals with 22. They are just two goals away from breaking the Marlies rookie goal scoring record.

Michael Hutchinson stood tall in the Marlies crease, stopping 28 of the 29 shots he faced. The team now heads to Syracuse for a tilt with the Crunch on Saturday. Puck drop is at 7:00pm ET.

We got better as the first period went on. First four shifts or so were definitely not the direction we wanted the game to go in to start. The team did a good job of recognizing it and finding our way back in the game and found some momentum in special teams. We got stronger as the game went on.

He’s been the catalyst for our team all season. With Anderson out, those two guys have a lot of chemistry and play well together but he’s been really strong in levelling up some other guys who have had an opportunity to play with him. He was a big part of the win tonight.

The Toronto Marlies host the Hartford Wolf Pack in the first half of a weekend back-to-back. The two teams last met back on January 19th, when Hartford won 5-2.

Some players to watch on the Marlies side include Bobby McMann and Alex Steeves, both are currently just three goals shy of the Marlies rookie scoring record with 21 each. Also, Brett Seney currently leads the team in points with 49. On the Hartford side, Anthony Greco leads the way with 56 points.

Puck drops at 7:00pm ET on Leafs Nation Network, and AHLTV. Fans can also follow along on Twitter (@TorontoMarlies) for game updates.