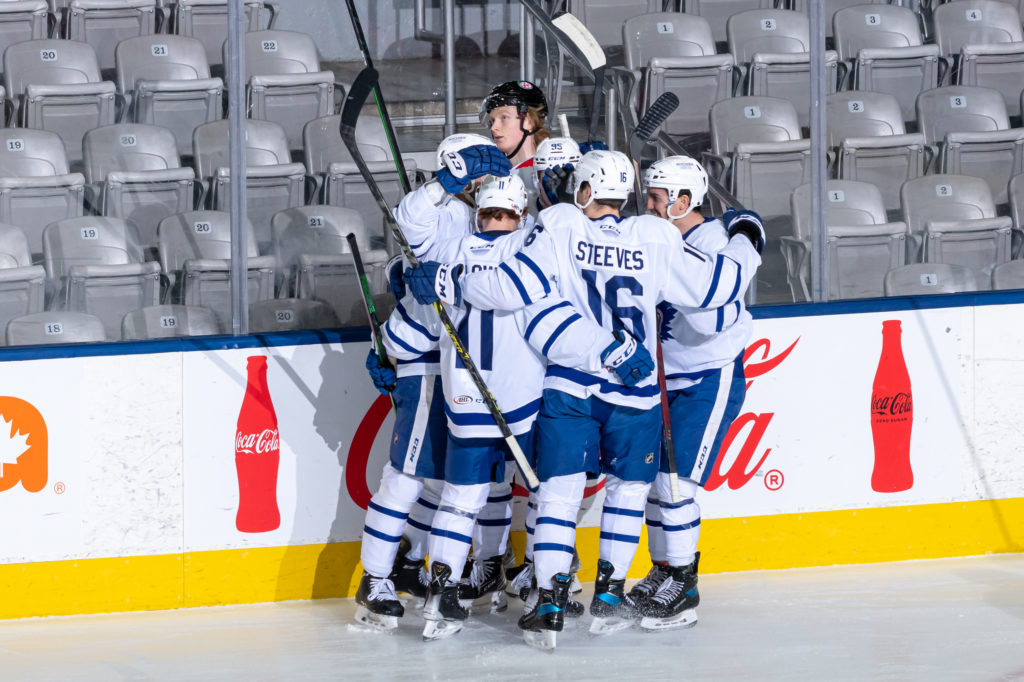 The Toronto Marlies defeated the Belleville Senators 4-2 on Monday, securing their first win of 2022.

The Marlies got off to a hot start, as Ryan Chyzowski potted his second of the season just 2:46 into the first period. Belleville quickly responded just under two minutes later with one of their own from Parker Kelly. But, the Marlies didn’t let up. Bobby McMann and Mac Hollowell both found the back of the net before the first frame was over, giving Toronto a nice 3-1 lead at the break.

In the second, it was a stalemate between the two clubs, as neither could solve the others goaltenders. Early in the third, Rourke Chartier brought the visitors within one, and it remained a one goal game for the majority of the final frame. It wasn’t until the last minute of play in the period, that Joesph Blandisi fired the puck into an empty Belleville net, securing the win for the home side.

Joseph Woll picked up his fourth win of the season, after turning aside 24 of the 26 shots he faced.

The Marlies are back in action on Wednesday afternoon when they host the Utica Comets. Puck drop is at 1:00pm EST.

Really happy for him. He’s one of those guys with an infectious personality. He’s always rooting and cheering on everyone regardless of his ice time or his opportunity. He’s the definition of a team player. So, it’s good to get him on the ice, get him some opportunities and he found some success early.

It’s been such a short window for us and our time with him, just his second game but you can tell the maturity he has and how he plays and how he manages situations. He’s a competitor, and you can tell he’s been a great addition.

On the locker room:
Everybody is really close in the dressing room. I know it’s a family type of atmosphere in there. The coaches are hanging out with the players and you can barely decipher who’s who because everybody gets a long really well. The training staff and everybody is looking out for us. I just think with the family atmosphere, everybody wants to go to battle for each other and that’s a good recipe for success.

The Toronto Marlies host the Belleville Senators on Monday afternoon, for the third of three straight games between the two divisional rivals. The Senators took the most recent matchup 2-1 on Saturday afternoon.

The Marlies are 6-7-1-1 against North Division opponents and 3-1-0-0 against the Belleville Senators. Toronto has outscored Belleville 16-8 this season.

On the Marlies side, Brett Seney leads the team in goals with 11 so far this season. Another player to watch is Filip Král who has recorded assists in four consecutive games. On the Belleville side, some players to watch include Jake Lucchini who leads the way with 19 points, and Rourke Chartier who has scored in two straight contests against the Marlies.