Marlies Top Monsters In Second Half Of Back-To-Back 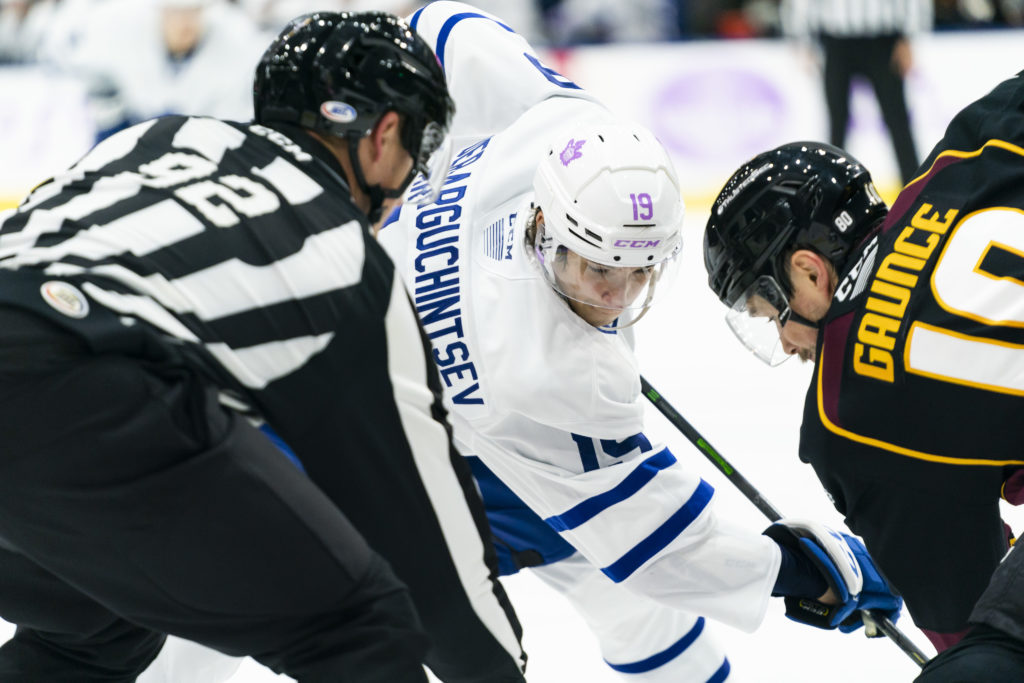 The Toronto Marlies topped the Cleveland Monsters 4-3 in overtime on Friday night, splitting the weekend series.

The Monsters got off to a hot start again, scoring the only goal in the first period. Then the Marlies offence went to work. On the power-play Josh Ho-Sang tallied his team leading ninth goal of the season. Then, just 23 seconds, later Ryan Chyzowski scored his first career AHL goal.

The Monsters later evened the score once again on their own power-play, before Semyon Der-Arguchintsev gave the Marlies the lead back before the second period was over. Both teams exchanged chances throughout the third. The Monsters managed to tie it up late in the frame, once again forcing overtime.

In the extra frame, it was the rookie, Alex Steeves who sent the home side home with a win, after tallying his seventh goal of the season. Keith Petruzzelli, who started his first career AHL game on Saturday, stopped 30 of the 33 shots he faced en route to his first career AHL victory.

The Marlies are back in action on Saturday at 4:00pm when they host Springfield at Coca-Cola Coliseum.

On the team’s response following the late tying goal:
The energy was good all day. The guys were saying the right things on the bench. I didn’t feel at any point that we as a staff had to find a way for them to want to do the right things. It was a very mature game. Our young group has come a long way. As tough as the last week and a half has probably been with some of the games and results that we’ve had, they stuck to a process today and they’re starting to find their way.

On Keith Petruzzelli’s first AHL start and win:
He did a really good job. He reminds me a lot of Ian Scott with how calm he is in net. Any time that you have a goalie that can instill some confidence and stillness back there, it just gives confidence to the team in front of him to play well.

On who he thought of with his first goal:

I think over the years it’s just my parents and everybody just helping me throughout my hockey career, and I think it’s just the sacrifices they’ve made, and I think it’s pretty special just to be able to kind of put into perspective scoring my first AHL goal. It’s taken a lot to get here so I’m really proud and proud to share that with them.

On the team’s response following the late tying goal:

It’s a pretty special group in there. I think there’s no doubt in anybody’s mind that when they scored that goal that we were still winning this game. It’s great for me to experience this weekend and get into some games, and it’s very special to get the win today.

On his first AHL win and who has helped him get to this point:

It was a pretty special night. I didn’t know that it was Hockey Fights Cancer Night so, that was great too. My grandma passed away a few years ago from breast cancer, so I’m sure she was watching over me tonight. A couple posts, a couple lucky bounces. And just thanks to my parents, of course. I wouldn’t be here without them. My older brother and just all the coaches and people who helped influence my life.

On the team’s performance:

Boys were great; blocking shots, taking away opportunities, just making my job easy. You can’t ask for much more from a D core then that. It’s great to see guys buying in and blocking shots and stuff like that.

The Toronto Marlies host the Cleveland Monsters on Saturday afternoon for the second half of a back-to-back. The two teams met on Friday night in Cleveland where the Monsters took a 5-1 victory.

This will be the third straight game between the two teams. Cleveland has won previous two, so the Marlies will be looking to grab a win on Saturday in front of a home crowd. The Monsters are currently on a four game winning streak.

Cleveland are currently second in the North Division standings, while Toronto sits fourth. The Marlies are 4-4-1-1 against North Division opponents and 1-1-1-0 against the Cleveland Monsters.

Some players to watch on the Marlies side include Brett Seney who has eight goals and 13 points so far this season, and Joseph Duszak who leads the team in assists with 13. On the Monsters side, Jake Christiansen leads the team with 17 points, while Brendan Gaunce leads the team in goals with seven.