Marlies Wrap Up Weekend With Win Against Cleveland 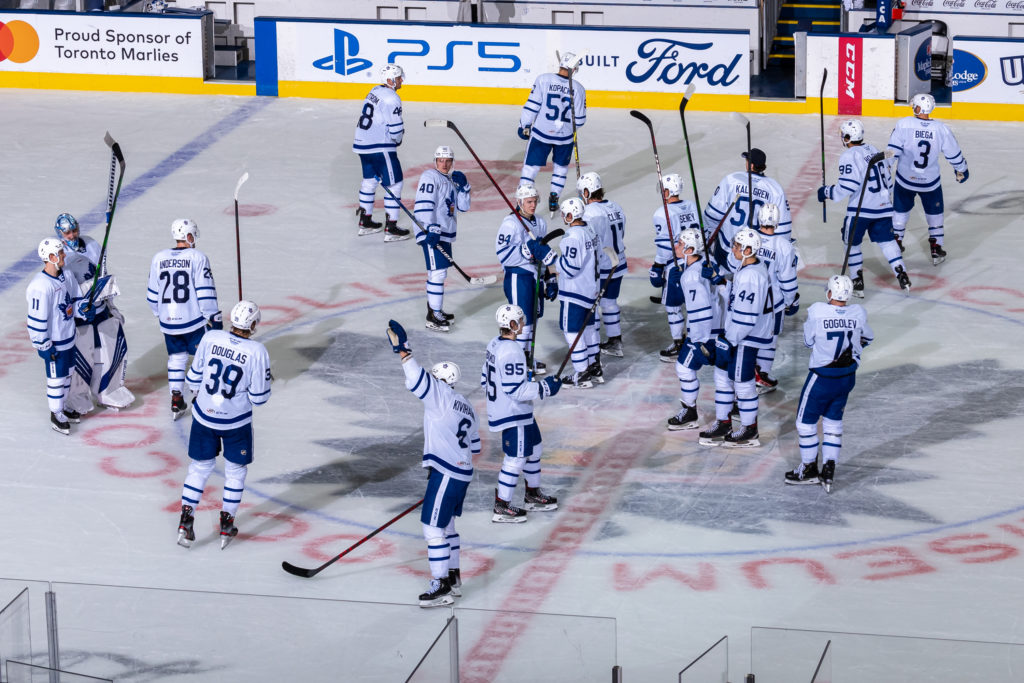 The Marlies are back in the win column after defeating the Monsters 3-2 in a shootout.

Marc Michaelis got the home side on the board with his first career AHL goal midway through the first period. Before the opening frame was over, the visitors added one of their own. Both teams added another goal each in the second frame, thanks to Joey Anderson of Toronto, and Josh Dunne of Cleveland.

There were plenty of scoring chances at both ends, but both goalies stood tall the rest of the way. Cleveland’s Jean-Francois Berube stopped 38 of the 40 shots he faced, while Toronto’s Joseph Woll stopped 33 of 35 shots in his return to game action.

In the shootout, Josh Ho-Sang and Mikhail Abramov both scored for the Marlies, while Joseph Woll held it down in net, securing the win for the home team.

The Marlies head out on the road for their first two away games of the season this week, stopping in Laval on Wednesday and Belleville on Friday, before returning home to host the Senators on Saturday afternoon.

On today’s game:
The first period was more of what we were looking for as a staff for the group. The second period was really tough. We had some guys that don’t kill that sat there for a long time. It was hard for them to get into the flow of the game. Back in the third, again we got into a flow, back into a rhythm. We got to use the depth of our roster and gain some momentum.

On how Toronto held back the push from Cleveland:
By our team sticking to a plan of having good structure offensively and defensively. We looked more like a group of five guys on the ice who were pulling in the same direction. And just the competitiveness of the guys being hungry to win a hockey game. The process was right today. Good to see the guys get rewarded when they do things right.

On the line of Anderson, Semyonov and Seney:
They’ve really been driving a lot for us. First and foremost, their competitiveness, how hard they work consistency. Relentless puck pressure and their ability to take away time and space and get a puck back quick, get back to offence faster. And then you couple that with how much skill they have and they’re able to make plays on the inside. They’ve really been a driving force for us to start the season.

On Joseph Woll:
He was, no pun intended, a wall back there. Made some really good saves at big key moments of the game and then to shut the door in the shootout. It’s really good to see him back and doing well. He’s come a long way these last couple of years and his work is paying off.

On Joseph Woll:
Woll was absolutely stellar. He’s been itching to get in the lineup. It was his first game of the year. Credit to him. He stood on his head. He made a couple of big saves. On certain plays, we hung him out to dry a little and he said, don’t worry guys, I got you. It’s nice to see that from Woller. He’s such a great guy, great energy in the room. That’s what you need from your goalie. He picks you up when you’re down and he stands up when you need him. Both our goalies are great at doing that and that’s our expectation of him this year.

The Toronto Marlies are looking to finish the weekend on a high note when they welcome the Cleveland Monsters to Coca-Cola Coliseum. The two teams haven’t met since February 26th 2020 when the Marlies won 4-3 in overtime.

The Marlies are coming off a tough 7-3 loss to Rochester on Saturday. They will be looking to put a stop to Cleveland’s three-game winning streak. The Monsters will be playing their third game in as many days on Sunday, after winning two straight games in Belleville on Friday and Saturday.

On the Monsters side, Tyler Angle leads the way with six points so far this season. Kirill Semyonov is the Marlies top point scorer this season with four, after tallying his first career AHL goal in Saturday’s matchup.

Puck drops at 4:00 PM on Leafs Nation Network, and fans across Canada can also stream the game live in the official Toronto Maple Leafs App. Fans can also follow along on Twitter (@TorontoMarlies) for game updates.