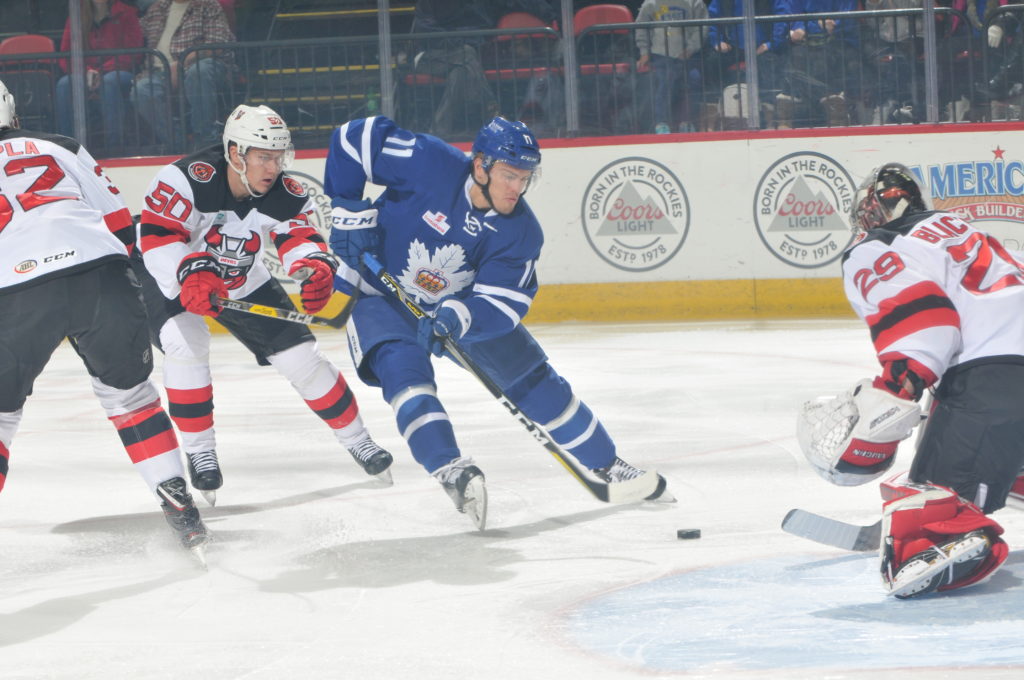 The Toronto Marlies launched a second period attack that netted three goals on route to a 4-1 victory over the Binghamton Devils on the road Friday night.

The Devils opened the scoring just past the eight minute mark of the opening period as Jacob MacDonald was able to bang a shot home. From there, Garret Sparks had another standout performance in the Marlies net, shutting the door despite consistent pressure from Binghamton.

Just a minute and a half into the second period, Nikita Soshnikov grabbed the rebound off a Miro Aaltonen shot and sent it top shelf, just under the crossbar, for his fifth of the season. Colin Greening also picked up an assist on the goal, which extended Soshnikov’s scoring streak to three straight games.

As the clock was set to hit the midway point, Kerby Rychel scored his third of the season as he deflected the puck off a Devils defender after a great pass from Dmytro Timashov. Calle Rosen, who had found Timashov in the slot, also had an assist.

With less than two and a half minutes left in the second, Martin Marincin received a pass from Andreas Johnsson that left him all alone in the slot. Marincin faked a shot, outwaited Devils’ netminder Mackenzie Blackwood and tucked the puck in around the post, giving the Marlies a 3-1 lead at the break.

Martin Marincin has his first goal as a Marlie this season.#MarliesLive pic.twitter.com/tV1MkRWdwd

With Binghamton’s net empty, Marincin fired a shot from his own end and made no mistake, scoring his second of the game to seal the 4-1 victory.

Sparks notched his seventh win of the season into tonight’s contest, making 33 saves in the effort. He now has a goals against average (GAA) of 1.57 and a .944 save percentage (SV%).

Neither team will have much of a break, though, as they will face off again tomorrow night right back in Binghamton.

Puck drop is set for 7:05 and the game is on AHL Live and Marlies Radio.

On tonight’s game:
I didn’t feel that we controlled anything at any point. I thought they just took it to us from start to finish. We just felt a step behind all the way through. We’ve got to be much more prepared. Our coaching staff myself included did not do a good enough job preparing our team today. All that said, we came out on the right side of it. You look at some big moments, big individual efforts at key moments. Obviously goaltending all the way through was very strong. Penalty killing was really good. Guys blocked shots, went down and sacrificed.at key times. Those were all really great things, really positive things to see guys digging down like that to help us get a win here today but our process and how we played here today was not even close to good enough.

On tonight’s opponent:
We played against a team that was more prepared than we were and that falls on me. I think they played with better structure, they played faster, played harder, more competitive. We won the game which was on the back of strong goaltending and penalty-killing. And aside from that, we didn’t even belong in this game.

The Toronto Marlies will travel to a familiar destination, but face a new franchise, on Friday night when they hit the ice against the Binghamton Devils for the first time since the Devils relocated from Albany.

The Marlies (9-4-0-0) enter tonight’s contest looking to rebound from a 4-2 loss to Wilkes-Barre/Scranton on Wednesday.

The Devils have struggled in their new city, winning just two games at home so far this season. Meanwhile, the Marlies have a 6-2-0-0 record when playing on the road.

Ben Smith leads the Marlies in both points (12) and goals (6), while Mason Marchment is producing over a point-per-game with 11 points (5G, 6A) in his ten appearances so far this season.

For Binghamton, Nick Lappin leads the offense with 12 points (8G, 4A) on the year. The Devils’ defensive unit has also been involved in creating scoring opportunities, as both Jaob Macdonald (3G, 4A) and Viktor Loov (1G, 6A) have seven points so far this season.

Special teams will once again be an important of tonight’s game, as Toronto’s conference-leading penalty kill (88.1%) will match up against Binghamton’s strong power play unit (18.4%).

Puck drop for tonight’s game is scheduled for 7:05 and fans can watch all the action on AHL Live or listen in to the radio call with Todd Crocker.