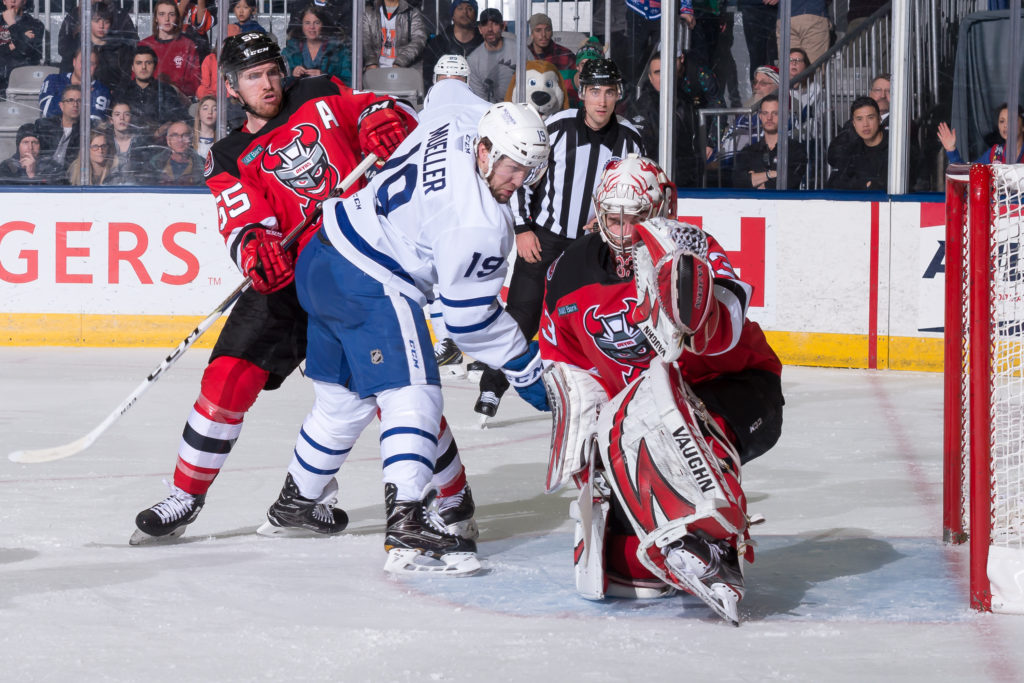 Kicking off a three in three weekend the Toronto Marlies looked to carry the momentum from a big win on New Year’s Eve into tonight’s contest against the Binghamton Devils. Although they found themselves down by one at the end of the opening frame, the Marlies battled back with five unanswered goals and picked up two points, improving to 16-13-3-2 on the season.

The Devils opened the scoring at 11:10 of the opening frame as Egor Sharangovich redirected a shot that beat Kaskisuo. Josh Jacobs and Marian Studenic assisted on the goal. The Marlies outshot the Devils 8-5 in the opening frame but were down by one heading into the first intermission.

The Marlies answered back with three goals in the third to jump ahead 3-1. Chris Mueller tapped in a blast from Sam Jardine at 9:26 to get the Marlies on the board. Dmytro Timashov picked up the extra assist on Mueller’s 17thof the season. At 12:08, Michael Carcone beat Evan Cormier with a blast from the top of the circle to give the Marlies their first lead of the night. Adam Brooks and Mason Marchment assisted on Carcone’s ninth of the season. At 14:51, Mueller was on the doorstep again and redirected a point shot from Jeremy Bracco to make it 3-1 with his second of the night. Calle Rosen had the other assist on the power play goal. The Marlies held the Devils to only four shots in the middle frame as they held a 3-1 lead heading into the second intermission.

Adam Brooks finished off a nice passing play on the power play late in the third as he fired puck in front of the net where it deflected in off a body in the crease. Less than a minute later, Carcone added his second of the night, beating Cormier with a rocket from the slot. Marchment assisted on the goal.

The Marlies will head to Syracuse for their meeting with the Crunch tomorrow night. Puck drops at 7:00 PM on AHLTV.

HEAD COACH SHELDON KEEFE
On tonight’s game:
I thought we had a good first period but I thought both teams weren’t giving up very much and I thought that we cracked first. We made some mistakes and they ended up in our net. We talked about just staying committed to how we want to play, re-establishing it again in the second period and we were able to do that. Usually in the second period, one team usually starts to take over, I thought that’s what happened for us and credit to our guys for sticking with it – first of all for getting the game all square and then building the lead and taking care of it. Good game for our guys.

On Michael Carcone joining the Adam Brooks and Mason Marchment line:
It was really good to see, especially to see them bounce back.  It was that line that cracked in hat first period and made some mistakes and were on for the goal against. But they responded very well after that which is very good to see. We’re looking for offence from all of our lines and looking for different people to step up and it’s nice to see Carcone get some confidence there and Brooksy too get on the scoresheet for three. A lot of good, positive things.

Coming off an exciting overtime win over the league-leading Charlotte Checkers on New Year’s Eve, the Marlies look poised to take their first lead in the season series against the Devils. Binghamton comes in to tonight’s game riding a two-game losing streak, most recently dropping a 5-2 decision to Wilkes-Barre Scranton.

While the eighth place Devils came out on top in their first two meetings of the season, the Marlies have since taken the previous two contests to even the series at two games apiece. In their last meeting on December 19th, the Marlies edged the Devils 3-1 on home ice. Tempers flared in that game with both teams combining for 124 penalty minutes. All of the games between these North Division rivals so far this season have been close fought battles, with there never being more than a two-goal differential.

Players to watch: Chris Mueller notched the game winning goal in overtime on December 31 and continues to lead the Marlies with 34 points (16 goals, 18 assists). Jeremy Bracco sits second in team scoring after hitting the 30-point mark (seven goals, 23 assists) on New Year’s Eve. Bracco also leads the team in power play assists with 13. Sam Gagner had a two-point effort on NYE and now has 25 points in 26 games.

Puck drops at 7:05 PM and fans can catch all the action on AHLTV.