Marlies Down Comets in Season Opener 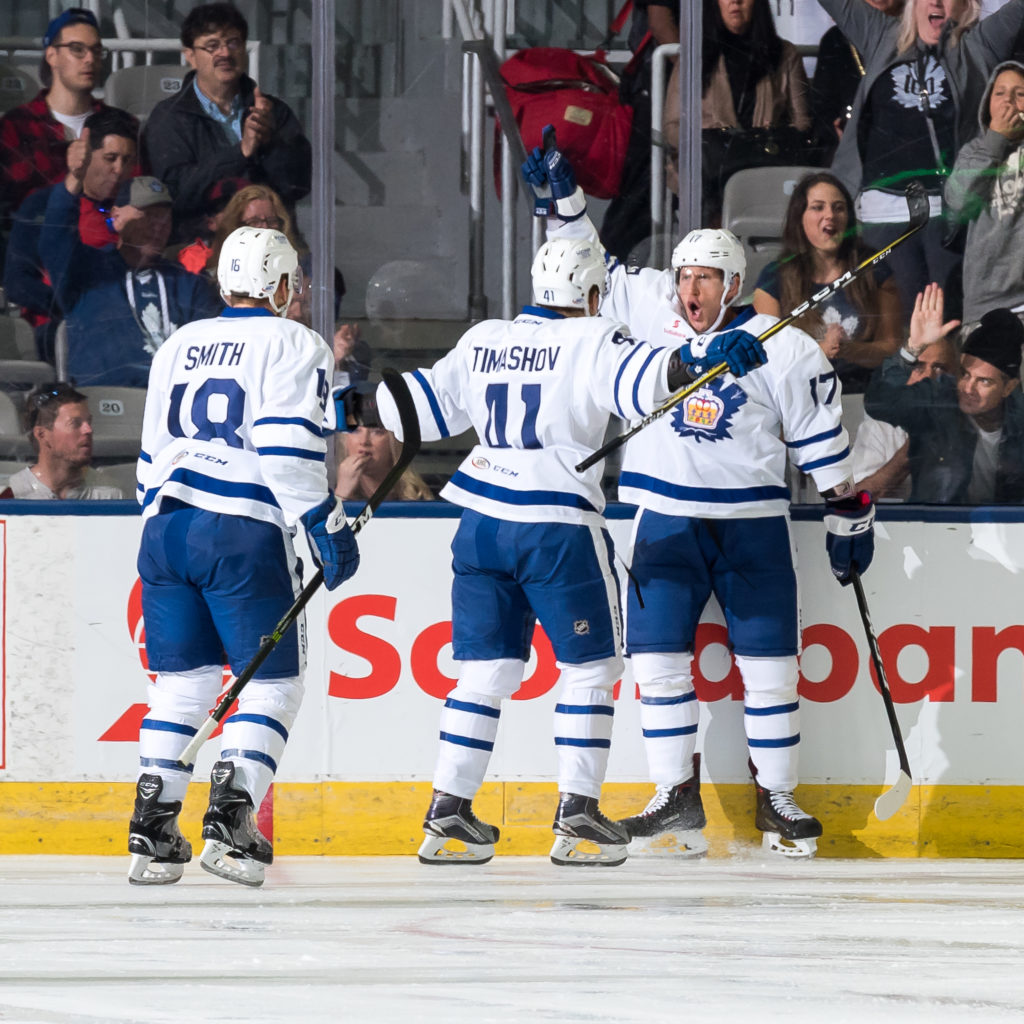 The Marlies opened the 2017-18 campaign with a total team effort that resulted in a 3-1 victory over the visiting Comets on Saturday night.

Both teams spent the first period feeling each other out, as the Marlies and Comets combined for just 10 shots in the opening frame. Nikolay Goldobin opened the scoring for the Comets on the power play just under the seven minute mark, the only time that Utica could solve Garret Sparks, who made 19 saves in the victory.

Under three minutes into the second, Rich Clune tied things up with a goal from a tough angle, bouncing the back off the back of Comets’ netminder Thatcher Demko. Ben Smith and Andrew Nielsen each picked up assists, as the two teams spent the rest of the second even at 1-1.

Kerby Rychel, celebrating his 23rd birthday today, potted the eventual game-winner as he picked up the rebound off a Travis Dermott point shot and buried it. Nikita Soshnikov would add an insurance marker into the empty net and the Marlies earned the win on home ice.

The two teams are back at it again tomorrow from Ricoh Coliseum at 4pm. Tickets are still available.

On the team’s first win: It’s nice, you want to win every game obviously. I think that wins in the division are going to be harder to come by this season so every time you get one it’s really positive and it’s nice to start out that way. We know it wasn’t pretty especially on special teams. Then for our power play to come through in the third period, I thought we played a pretty sound third period save for a few chances. I thought we did a good job in the that period so that’s a positive coming out of the game and obviously getting the win was a positive. We are going to try and clean it up when we will be back here tomorrow.

On the powerplay: Yeah, I don’t know if that’s why we had success. To be honest the reason why we made the change, the power play obviously wasn’t going well but I didn’t think Dermott was playing enough because of all the special teams time. Some other guys had played a lot of minutes because of the powerplay. In the end we had success with it so that was positive. Clearly, we didn’t spend nearly enough time working on the power play and it showed out there.

On positives heading into the season: I think it’s just like what I talked about. I think the fact that our power play did come through, that’s a positive. The fact that we got the win, that’s a positive. The fact that we only gave up four or five shots in the third period, there may have ended up being a couple posts but if you take out a couple of incidences I think we played pretty well. I liked the last five minutes especially when they didn’t really threaten, that is a big positive for us. We have a whole lot to clean up here but it’s game one for us. A lot of these guys have been together playing with the Leafs but it’s much different when you come here. All of a sudden you have different line mates, you’re slotted in differently and some guys that hadn’t been on the power play through exhibition are playing it now and just trying to get a feel from the bench. It felt very much like a season game. It was a little bit disorganized with lines and stuff like that so were going to get that tidied up as we get going and it should be much better.

On offensive strength this season: I haven’t thought about it a lot. I mean you look at some of the guys that we lost and you might think that offence could be hard to come by. But also, you look at some of the guys we’ve added like Mueller and Soshnikov so we’ll see how that shakes out. I think we are just focusing on playing really good hockey on both sides of the puck and we should have our fair share offence. We just want to continue to clean things up defensively and our power play last year, even when we were struggling to score at even strength, our power play carried us through a good chunk of the season and we want that to be a weapon for us. As you saw today, there is a lot of room for improvement there.

The Toronto Marlies will kick off their 2017-18 American Hockey League campaign this afternoon when the visiting Utica Comets come to Ricoh Coliseum, marking the second straight year that the Marlies will open the season at home against Utica.

The Marlies are looking to start the season off on the right foot, and build on a successful campaign last year when they finished second in the division and advanced to the North Division Finals in the Calder Cup Playoffs.

“The last couple of days, we’ve been able to get at it and have good skates,” Keefe said. “I think the guys are excited to go and been happy with the effort.”

Defenceman Justin Holl spoke about the excitement of hitting the ice and getting the season under way.

“It’s been a long week of practice, we’ve been on the ice since Monday so I think everyone is definitely raring to go this weekend and obviously the first game of the season is always exciting,” Holl said.

At the other end of the rink, Utica are looking to rebound from a season that saw the Comets miss the playoffs and finish fifth in the division.

Puck drop is scheduled for 4:00 pm. Limited tickets are still available online or by calling 416-597-PUCK (7825). Fans that can’t make it to the game can catch all the action live on Leafs Nation Network and AHL Live.

Please note that as an additional security measure for the 2017-18 season, no re-entry is permitted after you have exited Ricoh Coliseum gates. There are no longer any in-and-out privileges.