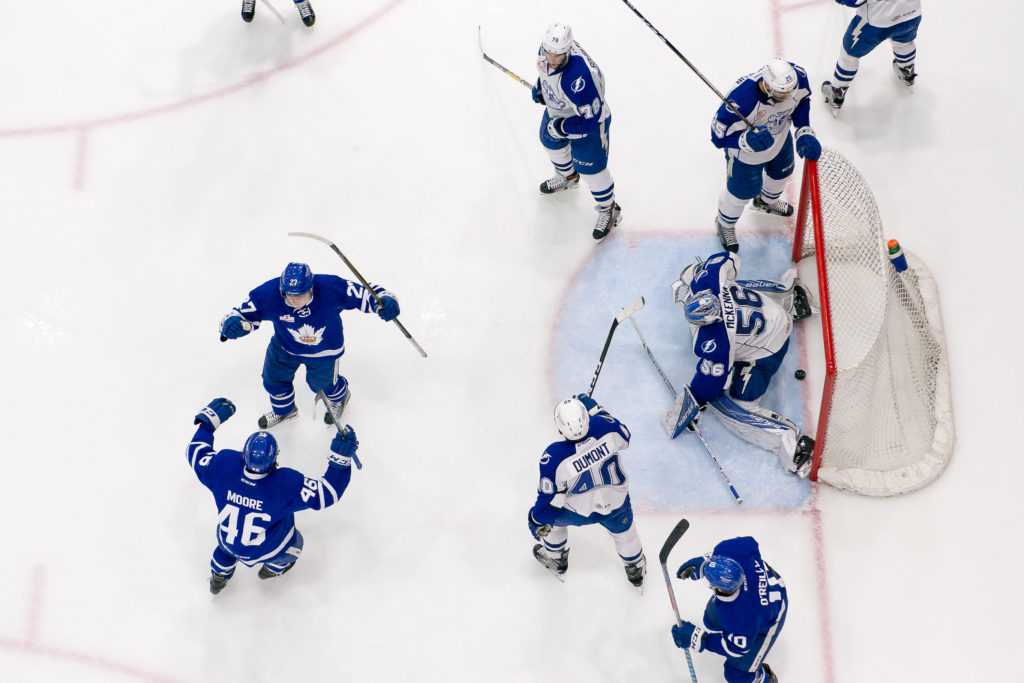 ·         Carl Grundstrom put the Marlies on the board with a power play goal at 7:24 of the second period. Since joining the Marlies, Grundstrom has recorded four points (3 goals, 1 assist) in five games.
·         Andrew Nielsen gave the Marlies the lead with his first of the postseason at 11:33 of the third period and it proved to be the game winning goal. Nielsen has four points through ten playoff games.
·         Cal O’Reilly picked up the primary assist on Grundstrom’s second period power play goal and added another on Nielsen’s game winner. O’Reilly has six points (1 goal, 5 assists) in ten playoff games.
·         Seth Griffith registered two assist’s tonight for his second multi-point game of the postseason and now has eight points (1 goal, 7 assists).
·         Kasimir Kaskisuo stopped 27 of 28 shots for his fifth win of the postseason.

“As a hockey player, that’s what it’s all about. When it’s playoffs and your season is on the line, that’s when you want to perform and be able to be the difference maker. I’m proud of the way all of our team and all of our guys showed up for this game.”
–       Kasimir Kaskisuo, Marlies Goaltender

“We hope we can get some good fortune there. We need to play better; we still didn’t play the way that I think we need to play if we’re going to be able to win on the road. Today we got a little bit of good fortune and the guys were grinding till the end and found a way to just keep them at one, so that was good for us, gives us a chance to get on the road here and get a road game right.”
–       Sheldon Keefe, Marlies Head Coach

It’s a must-win game for the Marlies as they return to home ice Monday night trailing 3-2 in the North Division Finals.

The Marlies will look to utilize home ice advantage after dropping Game 5 on the road. The Marlies are 4-0 at home so far during the postseason and will look to keep that streak alive in front of a full house at Ricoh Coliseum.

Entering tonight’s contest, Justin Holl and Kasperi Kapanen lead the Marlies in points during this year’s Calder Cup with seven apiece. Holl has one goal and six assists while Kapanen has two goals and five assists in seven games.

Andreas Johnsson leads the Marlies in goals with five, including tallies in each of the first three games of the series.

Special teams could be a key heading into tonight’s matchup. Both teams were held scoreless on the power play in Game 5 and will look to find success on the man advantage moving forward.

The Marlies will also look to continue firing pucks at the net and looking for opportunities in tight. Toronto has outshot Syracuse in each of the past three games and found success in putting away second chances in Games 3 and 4.

For the Marlies, Kasimir Kaskisuo has a Goals Against Average of 2.56 and a Save Percentage of 0.891 so far during this year’s playoffs. Mike McKenna is likely to start again for Syracuse, with a 2.60 GAA and 0.903 SV%.

Puck drop is scheduled for 7:00 tonight. Catch all the action live on Leafs TV and AHL Live, or join us online by following the Marlies on Twitter and tuning in to our #MarliesLive chat.