With Marlies or Leafs, Smith proves he’s a dependable pro 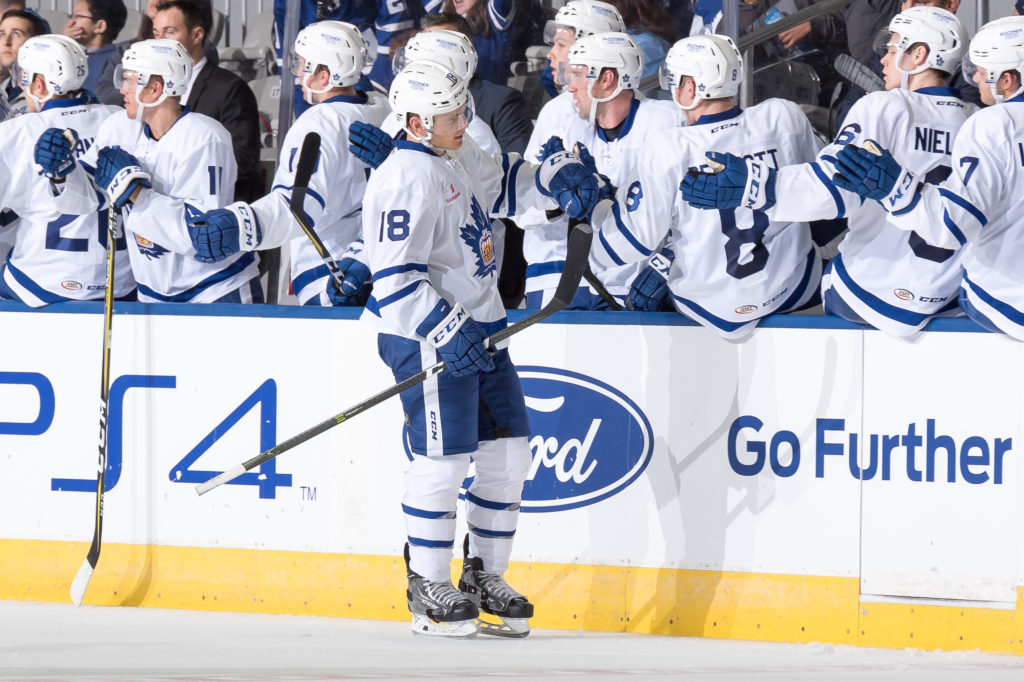 When Maple Leafs head coach Mike Babcock spoke in December of 2015 about what he wanted to see out of veteran players assigned to the organization’s American League affiliate in Toronto, he was clear and concise.

“I guess the first thing I want to see is I want you go down (to the AHL) and treat the other people right and show leadership,” Babcock told reporters. “Go do that, find your game and then come up here and play good. Our job as coaches is to maximize everyone’s skill set, and saying that, your obligation as a player is to make sure you’re ready to go mentally and physically.”

Babcock wasn’t speaking about forward Ben Smith at the time – he didn’t begin his first stint with the Leafs until they landed him as part of a trade with San Jose in February of 2016 – but there’s no evidence to suggest Babcock’s advice to veterans has changed. And this season, in his second go-around with the Leafs and the AHL’s Toronto Marlies, Smith is doing precisely what management wants: he’s providing the franchise’s prospects with an example of how to hone your craft while still remaining hungry and competitive on a daily basis.

And he didn’t need any instruction from Babcock to do so. That sense of quiet leadership is innate to the affable 29-year-old, who leads the Marlies in points this season with eight.

“It’s something you just have to know,” said Smith, who has five assists and three goals in 10 games. “As you get older – and I’m not that old – and you go through this sport, you’ve got to be ready for your opportunities and you’ve got to be a good guy and work hard. I didn’t really have any conversation with (Babcock) about it, but that’s how I’ve always approached it.” 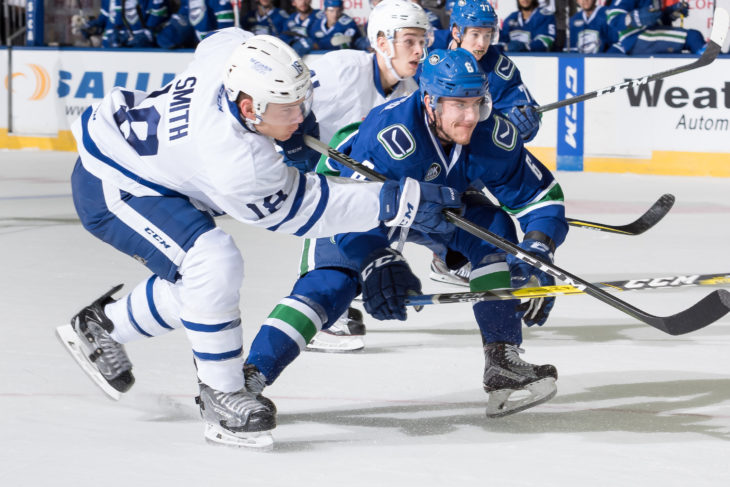 Born in Winston-Salem, N.C., and raised in Avon, Ct., Smith thrived at Boston College, playing four years at the NCAA institution and getting drafted 169th overall by the Chicago Blackhawks in the 2008 draft. His first taste of professional competition came in the 2010 AHL playoffs, where he registered one goal in three post-season games with the Rockford IceHogs. He played most of the next three seasons developing his craft in Rockford, but did get a taste of NHL life by playing 20 games in hockey’s top league and scoring four goals in that span. But he finally became a full-time NHLer in 2013-14, netting 14 goals and 26 points in 75 regular-season games, as well as four goals and six points in 19 post-season games with the Blackhawks.

Smith played most of the following season with Chicago before the Hawks dealt him to the Sharks in March of 2015 for forward Andrew Desjardins. On the day of the trade, Smith scored for his new team and finished the year with seven goals and 14 points in 80 games, but he spent approximately five weeks with the Sharks’ AHL affiliate in 2015-16 before being included in the trade that sent goalie James Reimer and forward Jeremy Morin to San Jose. Smith availed himself well with the Leafs in 16 games, amassing four goals and six points, but on a still-evolving Leafs team, he was assigned to the Marlies in April of 2016.

Smith took the move in stride, put his nose to the grindstone and became a valuable member of that Marlies squad: he notched four goals and six points in five regular-season games, then added seven assists and nine points in 15 playoff games as the Marlies advanced to the conference final.

Working well with Leafs youngsters including William Nylander and Zach Hyman during that playoff run endeared him to team brass, but Smith was still driven by the desire to be a full-time NHLer and signed a one-year contract with the Colorado Avalanche for the 2016-17 campaign. However, when the Avs waived him early in the season, the Leafs were quick to claim his rights and employ him as a trusted penalty-killer who gave them depth at the centre position. He finished the year with two goals and four points in 36 games, and was rewarded at season’s end by signing a one-year contract to remain in Toronto for the current season.

In his time with the Leafs, Smith has seen Toronto’s depth levels improve dramatically, and although he still has that burning fire to get back to the NHL level – really, all players you’d want on your team should have such a feeling – he’s willing and able to serve as a mentor of sorts and an example for the Marlies’ evolving youngsters.

“A couple years ago, I got put on waivers and sent down with the Sharks, and had a five-week AHL stint before I got traded here, so I’ve been through it before,” Smith said. “It’s one of those things where you get to play a bit more, you get to touch the puck a bit more, which is nice, because it helps your confidence. At the same time, you’re a competitor and you want to be in the NHL.”

Life in the AHL is a different animal – games take place in bunches, lineups change on a night-to-night basis, and coaches are tasked with staying competitive while also teaching and improving the skill and will of developing prospects. And having a pro’s pro such as Smith makes Marlies head coach Sheldon Keefe’s job run more smoothly.

“We’ve had Ben down here previously, and he’s a top-notch pro in terms of his attitude and how he handles his own game, his own fitness, how he takes care of himself,” Keefe said after a Marlies practice in late October. “We’re a competitive team that’s pushing to win every single game, but we’re doing so without losing sight of what we’re here for, which is to develop players. So you need to have veteran guys that are going to be willing to accept that, at times, they’ve got to take a back seat. Ben…has been, for the most part, playing on our fourth line and killing penalties, but is still one of our most productive players every game. He just recognizes where he’s at and what the situation is for us.” 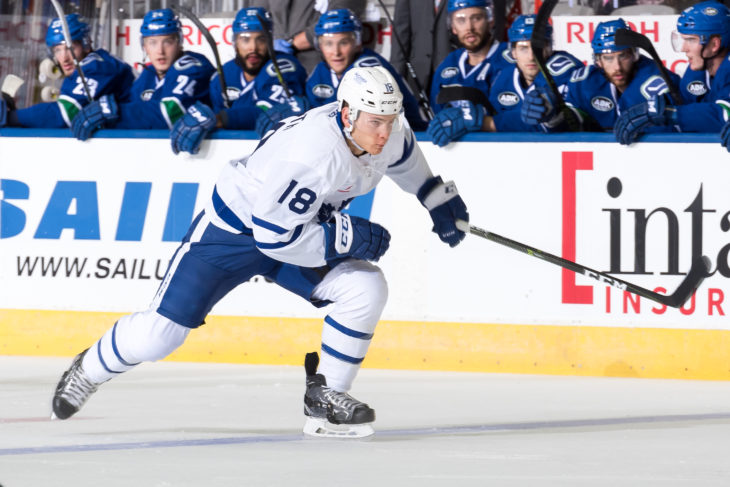 With the Leafs’ strong start to the year and good fortune on the health front, there may not be an immediate opportunity for Smith at the NHL level. But he’s not focused on something that isn’t within his control. He’s doing what comes naturally to him – being a solid citizen, showing up to work every day with passion and commitment, and letting the fates decide the rest as he strives to help make the Marlies as competitive as they can be.

“You can’t just sit here and hope (for a recall to the NHL),” Smith said. “You’ve got to approach the season everyday and enjoy it and work hard and just play your best. I’ve been around a while to know that you don’t just get given opportunities. If you get them, you have to take advantage and be at the top of your game.”

Smith was a history major in college, and remains fascinated by the U.S. political scene in particular, but he decompresses from his work life in other ways: through self-help books and historical fiction, and through TV shows he’ll download to his iPad – Friends and How I Met Your Mother are a couple of his favourites, but he also enjoys more serious fare like Homeland.

That said, he’s also been front and center for a different kind of history: he’s seen the growth that’s happened within the Leafs organization, and playing his own role in that process is something he takes great pride in.

“It’s amazing how far the organization has come in the past couple of years – even in the last year-and-a-half since I’ve been here,” Smith said. “It’s nice to be a part of it.”