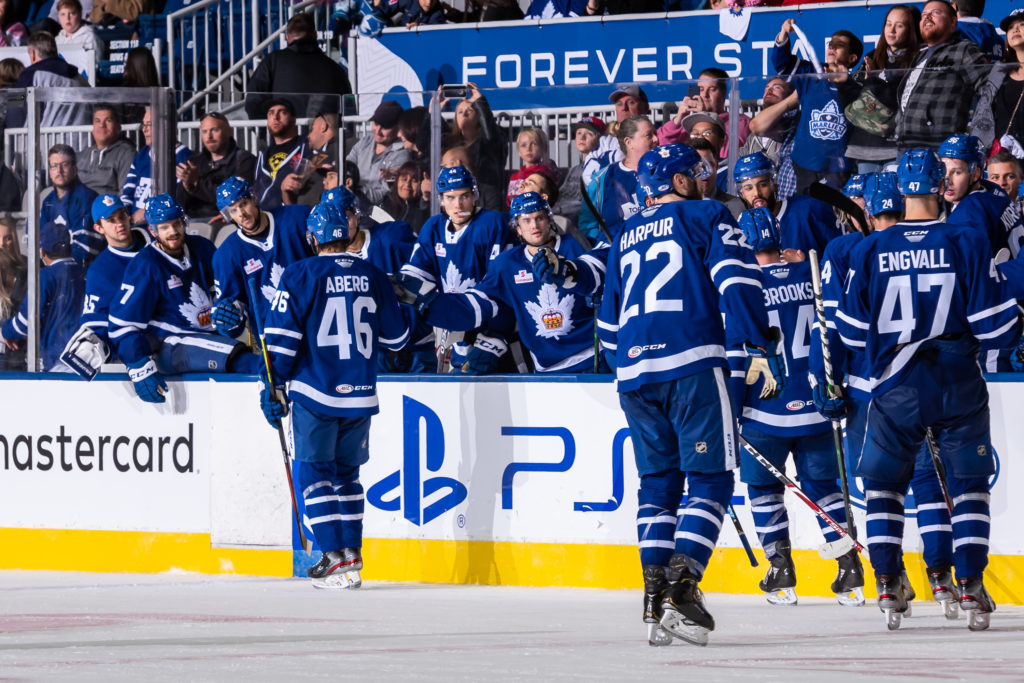 The Toronto Marlies opened the 2019-20 season with a convincing 4-1 win over the visiting Belleville Senators.

The Marlies looked comfortable right from the drop of the puck and were granted an early opportunity on the man-advantage as former Marlie, Michael Carcone was called for hooking. Toronto converted just seconds into the power play with Egor Korshkov burying the opening goal at 4:17 of the first period. Adam Brooks and Jeremy Bracco picked up the assists on the power play goal. Penalty trouble cost the Senators again later in the frame when Timothy Liljegren fired a one-timer from the top of the circle, giving the Marlies a 2-0 lead with their second power play goal of the game. Bracco and Korshkov assisted on the goal. The Marlies held a 2-0 lead heading into the second period.

The Senators solved Kasimir Kaskisuo at 13:14 of the second period when Alex Formenton found the back of the net to cut the Marlies’ lead in half. Carcone and Christian Jaros assisted on the goal. The Marlies saw an opportunity on the power play late in the frame but were unable to capitalize on the man-advantage. The score remained 2-1 heading into the last period.

Jordan Schmaltz restored the Marlies’ two-goal lead at 14:36 of the third period, wiring a shot past Marcus Hogberg from the high slot on a delayed penalty. Bracco picked up his third assist of the game on the goal and Brooks his second. Minutes later, Pontus Aberg found the empty net to give the Marlies a three-goal cushion en route to a 4-1 win.

Next up the Marlies will travel to Manitoba for back-to-back games against the Moose on Friday and Saturday before returning home to host the Hershey Bears on Wednesday.

On what he’s looking for from his team in the next game:
I really liked our third period the fact we were able to clean up our game. And obviously to that point, it wasn’t very good. We asked the guys for a little more purpose and structure in what we’re doing and once we did that, I thought we really played to the strengths of our team. This is a unique team, different than the others that we’ve had, where I think we’re really going to have to rely on structure to really wear on teams and use the size that we have. The skill I think you know it’s going take some time to come out, but we have the ability to really wear on teams physically, but we need to do that with good structure, and once we did that in the third I thought the game was pretty well taken care of.

On Bracco’s multi-point night:
He just picked up right where he left off. [On] the power play, [he] gets us going, he scored in the first five or ten seconds. He just delivers the puck to the net and [Korshkov] does a good job. It’s a different look for us on the net front than we had last season, but he just gets the puck there for us. When the door opens, Braccs is going to make a play and give us opportunities to win games. It was really good and obviously very important for us to get going here and Braccs led the way for sure.

On Kaskisuo continuing his strong play from the 2019 playoffs:
I think in the first two rounds of the playoffs in particular, which, when I spoke to him this week letting him know he was going to get the start in game one, it was to keep going where we left off. He reminded me that he wasn’t all that thrilled with how he actually finished in the Charlotte series, but the first two series he felt really good and was the backbone of our team and he was again today. We want to continue to make sure that both he and our team continue to get better, though. I think Kaz had an excellent first game down in Utica to open the season last year, so lots of reason for us to continue to work and make sure that we don’t look back.

The Toronto Marlies return to action today to kick off the 2019-20 regular season. The Marlies host the Belleville Senators as the Battle of Ontario returns to Coca-Cola Coliseum for the first of 12 meetings between these North Division rivals.

The Senators had the Marlies’ number last season, winning eight of their 12 meetings during the regular season series. Despite this success, the Senators narrowly missed the 2019 Calder Cup Playoffs and will be hungry as they look to bounce back this season.

The Marlies are coming off a successful 2018-19 campaign that saw two series sweeps before they secured a spot in the Eastern Conference Final against the eventual Calder Cup Champions, the Charlotte Checkers.

With such a revamped roster that boasts a lot of depth, building chemistry will be a key focus for the Marlies as the 2019-20 season gets underway and the team looks to find their groove. Some familiar faces in the lineup include Adam Brooks, Pierre Engvall and last year’s leading scorer, Jeremy Bracco. Welcome additions include Matt Read, Kevin Gravel, Ben Harpur and Jordan Schmaltz who all bring recent NHL experience. Kasimir Kaskisuo and Joseph Woll will share duties between the pipes this season.