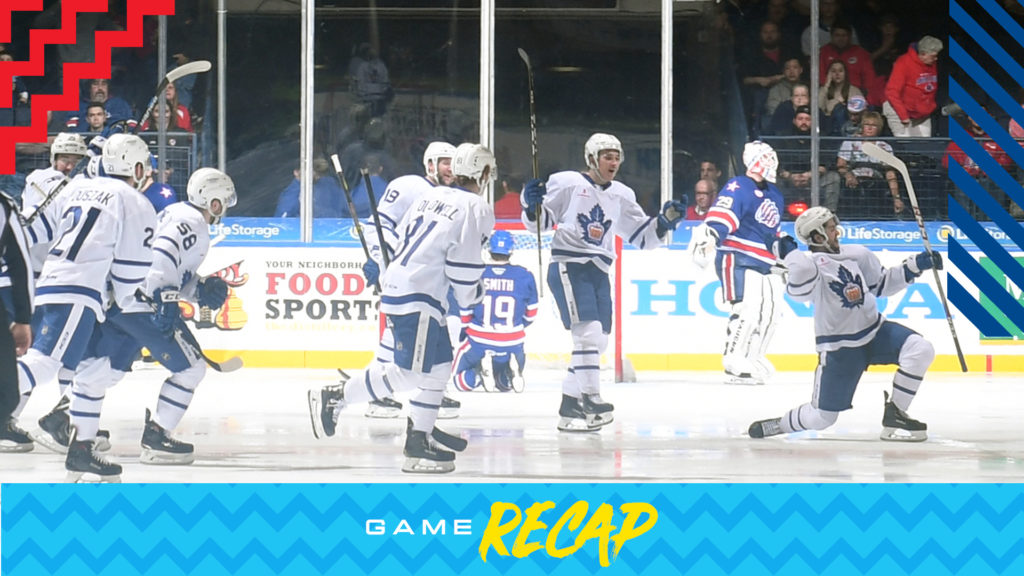 The Toronto Marlies hoped to extend their series lead to 2-0 on Sunday when they visited the Blue Cross Arena for game two of the North Division semifinals. After going down 2-0 in the second period, the Marlies battled back with three unanswered goals to take game two by a final score of 3-2.

From the drop of the puck, it was clear Rochester came ready to play as they looked to even the series.  They tested Toronto goaltender, Kasimir Kaskisuo early and often but he stood tall between the pipes and make some key saves to keep the Americans off the board. The Americans outshot the Marlies 18-7 in the opening frame.

Toronto saw an early opportunity on the power play in the third period as Kevin Porter was called for slashing. The Marlies capitalized on the man-advantage as Chris Mueller lifted the puck over Scott Wedgewood to get the Marlies on the board. Jeremy Bracco and Rasmus Sandin picked up the assists. Less than a minute later, Bracco found the loose puck in the crease and buried it to even the score 2-2. Vincent LoVerde and Pierre Engvall assisted on Bracco’s first of the postseason. The score stayed locked at 2-2 through the remainder of regulation, sending things to overtime.

Bracco sealed the deal in overtime with an amazing display of patience to wait out the Amerks defense before finding the back of the open cage. Mueller and Dmytro Timashov recorded the assists on the goal.

On the team being resilient:
I think resilient is a good word. I like the fact that we came out with a purpose there to start the third because I thought that through that second period, I thought we stopped playing for a while and it really made it a lot easier for them to come at us. We were a little bit dejected it felt like but we were able to regroup in that second period. We challenged the guys to go out and score the next goal. We thought if we could score the next goal that it would make things real interesting. It seemed to spark us in terms of us going and getting the second and all of a sudden, the game’s tied. It was resilient of us to find a way there. The way the series has gone is the way we expected that it would. We come into this week, our plan and the things that we talked about were that they’re going to carry the play, they’re a very deep team, the best roster in the American Hockey League in terms of what they can roll out shift after shift so they’re going to carry play so we’ve got to withstand that and we’ve got to manage it and do what we can tactically to try to be able to counter it and then we have to find ways to win games. We’ve got to get great goaltending, we’ve got to get some luck, we have to be great on special teams, these are the things we’ve talked about. So, the games have gone pretty much how we expected they might and we found ways to win.

On Kasimir Kaskisuo’s game:
He was excellent again. He’s been excellent for a long time. It’s not just a couple days here in the playoffs, he’s been good for a long time. Our team has a lot of confidence in him. He’s earned that for how he’s played. Obviously, he’s another guy who’s been resilient all season as well. He’s just been solid there for us and given our team confidence. We expected it was going to be difficult for us to carry play. What we’ve talked about is we’re not going to get focused on trying to prove we’re the better team, trying to carry play or anything like that. We’re trying to withstand pressure, trying to counter it as best we can and focus on trying to win the games and we’ve been able to do that certainly Kas has been the backbone of it.

On the first period where Rochester had 18 shots:
It was another weather the storm type period. It was (Kaskisuo’s) period. We had to step up for him and our period to help him was the third. The first and second (Kaskisuo) really stood on his head and obviously made a couple big ones late in the third to keep it tied. It’s a credit to him and we found a way.

On the game-tying goal:
Pierre (Engvall) made a nice play, held the guy off, threw it up to (LoVerde) and Vin kind of threw it at the net. Keefe was preaching in between periods “we’ve got to get in front of him, take the eyes away” and it bounced and luckily ended up right in front of me and then we were able to tap it in.

On the game-winning goal:
We’ve been talking about pushing out and I found a pocket there, (Mueller) found me and I was able to get Redmond to leave his feet and just pull around him and found myself with an empty net.

The North Division semifinals continue today as the Toronto Marlies and Rochester Americans meet for game two at the Blue Cross Arena.

The Marlies set the tone for the series on Friday with a convincing 4-1 win over the higher-seeded Americans. Nicholas Baptiste potted the opening goal of the series in the second period and it was clear from there that the Marlies came to play.

Toronto was 3-for-3 for on the penalty kill and was 1-for-3 on the power play. The Americans outshot the Marlies 30-23, but Kasimir Kaskisuo stood tall in net, turning away 29 shots and allowing just one goal late in the game.

With a 1-0 lead in the best-of-five series, the Marlies will look to pick up another win and head back home for games three and four with a strong advantage. They will have a tough road ahead as the bolstered Americans aim to even up the series.

Puck drops at 3:05PM on Leafs Nation Network and AHLTV. Fans across Canada can also stream the game live in the Toronto Maple Leafs app.