Marlies Fall to Rocket in Shootout 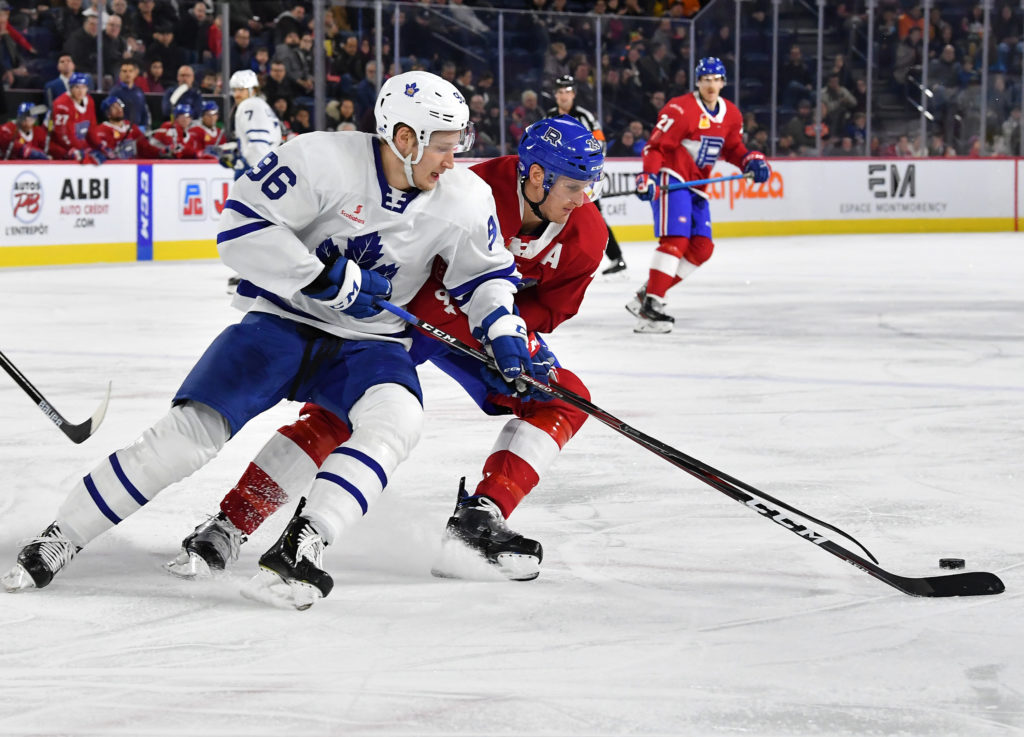 The Marlies visited Laval for the first time this season Saturday afternoon, in a quick turnaround following last night’s game in Belleville.

Egor Korshkov got things going early in the first period, notching his 6th of the season at 6:37. The goal came on the power play as Jeremy Bracco spotted Korshkov on the doorstep and fed him a pass right on the tape that he tapped past Charlie Lindgren. Rasmus Sandin provided the secondary assist on the opening goal. The Marlies held a 1-0 lead after 20 minutes of play.

The Marlies struck again just past the midway point of the game when Tanner MacMaster teed up Rasmus Sandin for a one-timer that beat Lindgren to put Toronto ahead by two. Timothy Liljegren added the extra assist. The Rocket battled back late in the frame to cut the deficit to 2-1 with a goal from Joe Cox. Minutes later the home team evened things up 2-2 with a goal from Dale Weise. The score remained locked at 2-2 after 40 minutes of play.

Toronto added two goals in the first half of the third period to jump ahead. Darren Archibald ripped a one-timer in close off a pass from Garrett Wilson at 2:35 of the third period to break the deadlock. At 7:45, Nic Petan sent Jeremy Bracco in alone and he fired a shot short side past Lindgren to make it 4-2. At the 11:00 mark, Laval’s Lukas Vejdemo brought the home team back within one. The Marlies responded at 13:08 as Pontus Aberg fired a shot on net that got redirected off a Rocket player past Lindgren. Timothy Liljegren and Pierre Engvall assisted on the power play marker. Laval answered back with two goals late in the frame to even the score 5-5 and send the game to overtime.

3-on-3 did not produce a winner so this one would need a shootout. Petan, Agostino and Aberg all shot for Toronto but were unsuccessful. Alex Belzile beat Joseph Woll with a backhanded shot in the third round of the shootout to seal a 6-5 win for the Rocket.

On identifying trends through the beginning of the season:
I don’t know if I’d say trends, other than some of our play to the neutral zone, I think, we need to clean up and do better but a lot of our game I liked a lot to be honest. I liked how we stuck with it. We knew this was going to be a tough game for us to play here today with our travel coming in late and the quick turnaround here, playing against a team that I fully expected would be our toughest opponent that we’ve played to date here. Even last season playing against them with half the talent, they were one of the tougher teams we played against. We knew offence was hard to come by in that they shoot the puck a lot and spend a  lot of time in your end and forecheck and work and all those things so it was going to be an extra challenge for our team today but I liked that we were able to play with the lead and do a lot of things to generate enough offence to score. We were good on special teams up until we weren’t in the third there when we needed it the most. All the things we wanted to do well I thought we did. Obviously, we know though that we have to be better in order to compete on a regular basis.

On the team’s identity:
I think we’re still trying to sort that out to be honest. We changed out lineup up a little bit here today. We’re waiting on some people to come into our lineup that I think are going to change the look of our team significantly. Obviously, Nic Petan’s arrival changes our group significantly. I think we’re still trying to sort that out and as I said, changing the lineup up a little bit today was just kind of experimenting on what we would look like if we would move things around and also just trying to utilize our depth but we’re a big, strong team with lots of experience and I don’t know if we’re playing like that quite yet. Still trying to find our way. It’s a little adjustment for me as a coach too. It’s a much different type of lineup and we’re trying to sort through that. I know we have spirit and we’ve got fight and that’s why we’ve been able to stick around and make sure we get points in every game.

The Marlies close out their weekend road trip today with a stop in Laval to take on the Rocket.

Today’s game marks the first of eight regular season matchups between these North Division rivals, and the Marlies will be looking to build off a convincing 7-4 win over the Belleville Senators last night. Toronto powered back with a four goal third period to come from behind and pick up their seventh win of the season. The Marlies have picked up a point in every game so far this season. Pontus Aberg continues to lead the Marlies with 11 points (6 goals, 5 assists) including a goal in last night’s contest.

Laval comes into today’s game riding the high of a 2-1 shootout win over the Hartford Wolf Pack. The Rocket have won their previous three contests and have a league-best penalty kill (97.8%), allowing only one goal in 45 shorthanded situations. Alex Belzile leads the Rocket in scoring with 9 points (5 goals, 4 assists) through 12 games.

The Marlies were 7-2-1-0 against the Rocket last season and are 9-2-0-0 over the last five years when visiting Laval.

Puck drops at 3:00 PM on AHLTV and fans can check in on Twitter (@TorontoMarlies) for game updates.