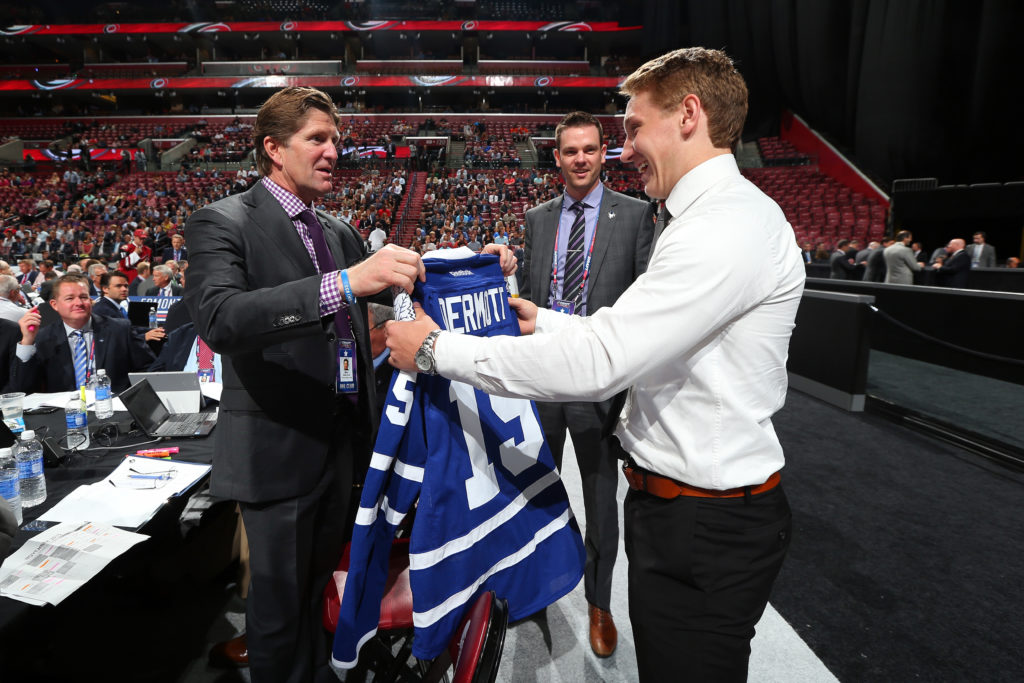 As we get set for a busy weekend across the National Hockey League, we have an opportunity to look back at the important role the Toronto Marlies play in the development of Maple Leafs.

The Toronto Maple Leafs roster currently features three Marlies Graduates who were drafted outside of the first round, developed with the Marlies and are now making an impact with the Leafs; Connor Brown, Andreas Johnsson and Travis Dermott.

Connor Brown was selected by the Maple Leafs in the sixth round (156th overall) of the 2012 NHL Entry Draft. After an impressive major-junior career with the Erie Otters of the Ontario Hockey League, the Toronto, Ontario native spent two seasons with the Marlies where he recorded 90 points (32 goals, 58 assists) in 110 regular season games. Brown made the jump to the National Hockey League for the 2016-17 season and scored his first NHL career goal on March 24, 2016 against the Anaheim Ducks. In 253 regular season games with the Leafs, Brown has recorded 99 points (43 goals, 56 assists).

Andreas Johnsson was selected by the Maple Leafs in the seventh round (202nd overall) of the 2013 NHL Entry Draft. After a successful young career in Sweden, Johnsson joined the Marlies for the 2016-17 season where he recorded 47 points (20 goals, 27 assists) in 75 regular season games. The following season, Johnsson had a part-time stint with the Maple Leafs that included nine regular season games and six postseason contests. He scored his first NHL career goal on March 17, 2018 against the Montreal Canadiens. A little over a month later, he was loaned back to the Marlies where he played an instrumental role in the team’s historic Calder Cup Championship run. Johnsson led the AHL in postseason scoring with 24 points (10 goals, 14 assists) in only 15 games, and received the Jack A. Butterfield Trophy as most outstanding player of the Calder Cup Playoffs. His performance earned him a full-time spot on the Maple Leafs roster this past season where he recorded 43 points (20 goals, 23 assists) in 73 regular season games. He scored his first career hat trick on November 24, 2018 against the Philadelphia Flyers.

Travis Dermott was selected by the Maple Leafs in the second round (34th overall) of the 2015 NHL Entry Draft. The Newmarket, Ontario native joined the Toronto Marlies for the 2016-17 season following a successful major-junior career with the Erie Otters of the Ontario Hockey League. Dermott finished his out his AHL rookie season with 25 points (5 goals, 19 assists) in 59 regular season games. The following season, Dermott had an impressive first half on the Marlies’ blueline which resulted in his quick ascension to the Maple Leafs. He recorded 13 points in 37 regular season games and scored his first NHL career goal on January 31, 2018 against the New York Islanders. After his extended stay with the big club, Dermott was loaned back to the Marlies in April for their Calder Cup Playoff run and registered 4 points (1 goal, 3 assists) to help the team capture their first Calder Cup Championship.