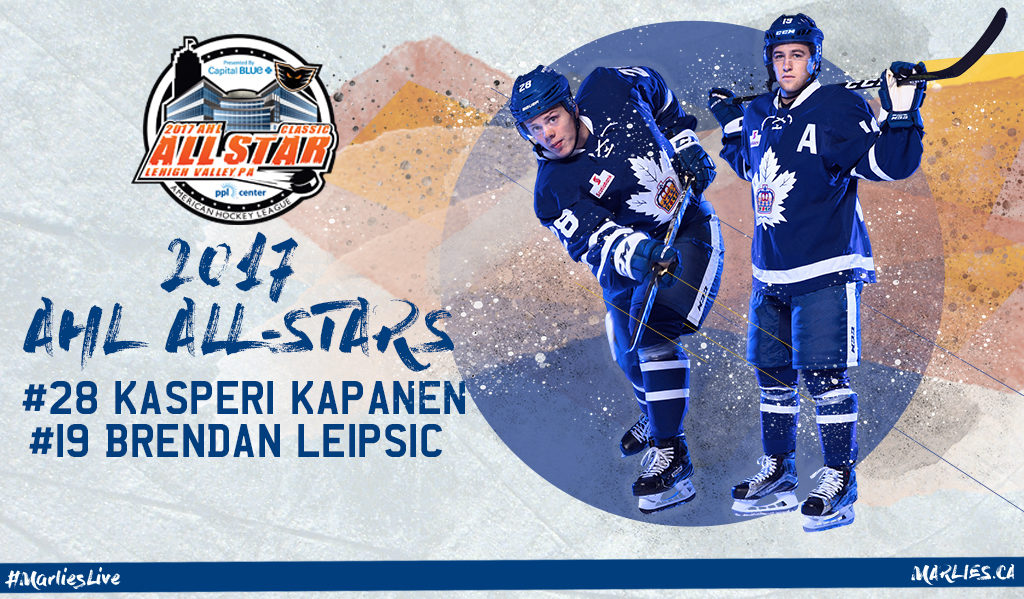 The American Hockey League announced today the playing roster for the 2017 AHL All-Star Classic presented by Capital Bluecross, to take place January 29-30 at the PPL Center in Allentown, PA., home of the Lehigh Valley Phantoms. Representing Toronto and the North Division All-Stars are Marlies forwards Brendan Leipsic and Kasperi Kapanen. Click here for the full roster for this year’s 2017 AHL All-Star Classic.

Kapanen, 20, has played in 29 games with the Marlies this season, registering 30 points (14 goals, 16 assists) in his second full season in the AHL. The Kuopio, Finland native is currently riding a six game point streak, collecting three goals and five assists in that span and has 14 points (5 goals, 9 assists) in his last 11 games. In 77 career AHL games, Kapanen has recorded 57 points (24 goals, 33 assists).

Leipsic, 22, has skated in 28 games with the Marlies this season, collecting 30 points (9 goals, 21 assists). In his third season in the AHL, the Winnipeg native, leads the league in power-play assists (15) and has failed to register a point in only four games this season. This marks Leipsic’s second all-star appearance, the first during his rookie season as a member of the Milwaukee Admirals. Leipsic has registered 138 points (43 goals, 95 assists) in 165 career AHL games.

The Marlies return to home ice Saturday at 5:00 p.m. when they host the Rochester Americans at Ricoh Coliseum.