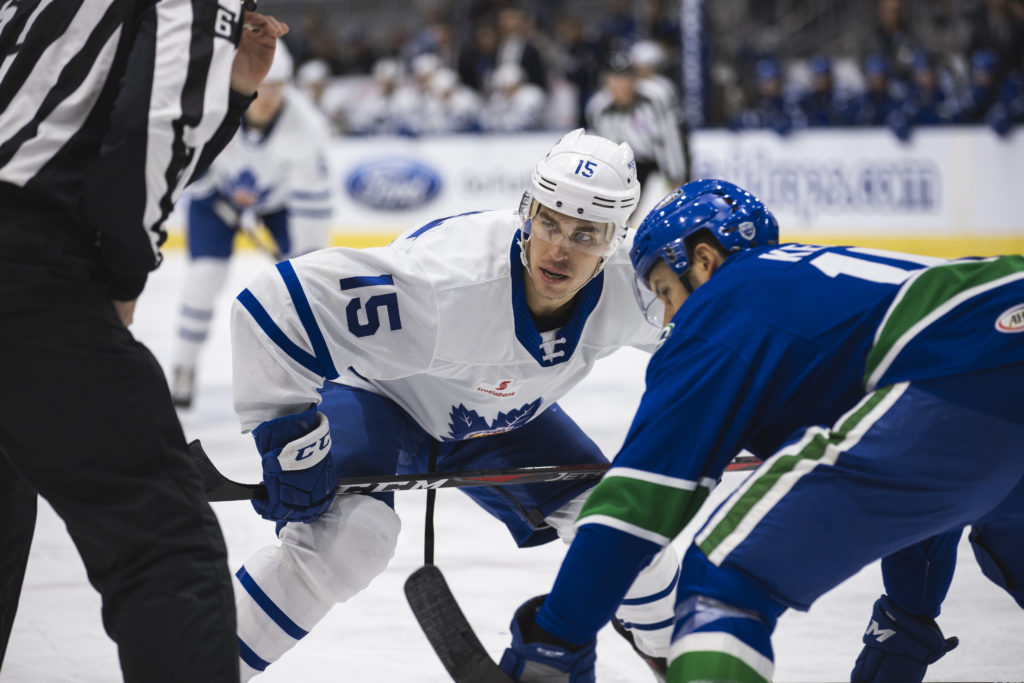 The Toronto Marlies were able to score first in the second half of this weekend’s back-to-back but came up short in a 5-3 loss to the Comets this afternoon.

It took less than three minutes for Trevor Moore to score his fourth goal of the season as he deflected Adam Cracknell’s shot from the top of the circle to put the Marlies on the board first.

Zack McEwen had a response for Utica just 1:02 after, however, tying the game at 1-1. That score line held up at the first intermission.

The Comets pulled ahead midway through the second off a Michael Carcone goal at the 9:23 mark and then Reid Boucher scored his league-leading eighth goal late in the middle frame.

Utica extended the lead to 4-1 at the 9:17 mark of the third as Guillaume Brisebois scored but Pierre Engvall broke in alone just 12 seconds later and fired a shot top shelf to cut the deficit in half for the Marlies. Cracknell had his second assist of the game on the goal and Ryan Sproul also had a helper.

The Marlies continued to push but an empty net goal put the Comets up by three late.

Cracknell found the back of the net to cap off a three-point performance in the final thirty seconds to add one for the Marlies but they fell by a 5-3 final.

Kasimir Kaskisuo made 12 saves on 13 shots before leaving the game midway through the second. Jeff Glass had 13 saves after entering. Ivan Kulbakov won a second straight for Utica this weekend, stopping 38 of 41 shots.

The Marlies penalty kill was successful in both situations they were called upon while there were no power plays for Toronto.

It will now be a week off before returning to action Friday night in Rochester.

On moving forward despite injuries:
We just have to continue to grow as a team and guys have to take advantage of the opportunities that they are getting, anytime you have the number of injuries that we do, everyone kind of shuffles up the lineup, the roles change and guys kind of need to settle into those roles. Everybody always wants more as a player and they’re getting lots of it, and so the guys need to take advantage of it but obviously we need to get healthy and we need to get people back. We’re going to have to look at that to see what we can do differently to make sure guys are rested and healthy and all those types of things as well at the same time we have to manage it because we have a lot of things clearly we need to work on and continue to practice.

On this week of practice:
We’re still in the early stages here so if we learned anything, I think we got to just continue to plug away at all areas of the game. Last week I thought our biggest issues were for our breakouts coming out of our zone, I thought we were real sloppy and turned things over. I thought with yesterday, and for a better part of today, we did a good job in that area, then different things are popping up here and there that we haven’t had time to cover or that we felt weren’t issues and then they creep up on you. So, it’s early in the season here, we’re just going to have to continue to work as a group. We are going to take tomorrow off and then we’ve got a good opportunity to spend time with the players again this week. We’ll be getting some people back and we’re working on different things as a group and we’ll have to get better.

The Toronto Marlies (1-3-0-0) will look to bounce back from the first game of their back-to-back with Utica (2-2-0-0) this afternoon after dropping yesterday’s matchup by a 7-4 final.

It was the third straight loss for the Marlies and they’ll be looking to snap that streak on Sunday against the Comets, who they beat in the season opener last Friday.

Trevor Moore picked up a pair of assists in yesterday’s game and now has four points (2G, 2A) in two games games against the Comets and his production will be an important piece as the Marlies look to split the series.

Sam Gagner had an assist in yesterday’s game and continues to lead the Marlies with six points (3G, 3A) entering play today.

It will be important for the Marlies to tighten up defensively and get off to a fast start when they hit the ice today. They’ve allowed 19 goals over the past three games and have allowed the first goal in three of four games, with that goal coming in the first five minutes of the game.

Utica’s offense yesterday was powered by Reid Boucher, who scored twice and added an assist in the Comets win. Boucher leads the league with seven goals on the season.

Puck drop is set for 4:00 and tickets are still available. Fans can tune in to the game on Leafs Nation Network, AHLTV or NHL Network.

Please note: There are a number of service changes in effect on GO Transit that will affect today’s game. Please leave early to make sure you arrive on time. Click here for more information on the service changes and how to get to Coca-Cola Coliseum.