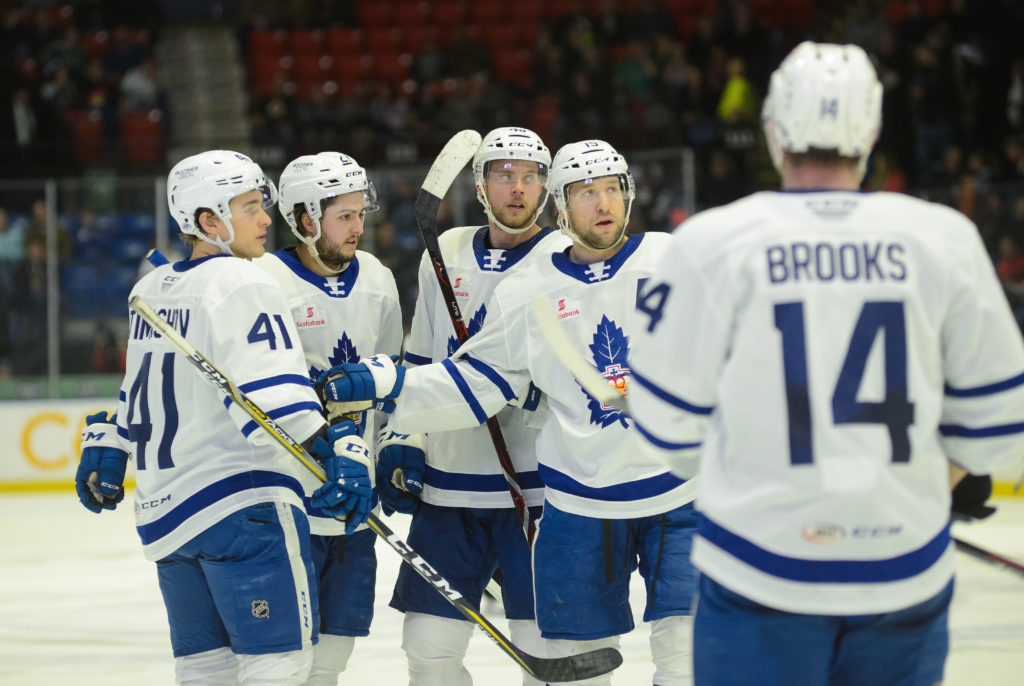 The Marlies were on the hunt for a win Friday night when they visited the Utica Comets for a North Division tilt. Four third period goals and a 37-save performance from Michael Hutchinson propelled the Marlies to a 5-2 road win over the Comets.

Jeremy Bracco kept his point streak alive and opened the scoring halfway through the game at 9:14 of the second period. The goal, which was assisted by Calle Rosen and Dmytro Timashov, set a new Marlies single-season franchise record with 73 points in a 76-game season.

The Marlies found a way to break things open in the third period with back-to-back goals from Colt Conrad and Michael Carcone. Conrad was making his debut with the Marlies and notched his first at 3:23, tipping in a point shot from Rasmus Sandin. Frank Corrado added the extra assist on the goal. 14 seconds later, Michael Carcone extended the Marlies’ lead to 3-0, firing home a shot from just outside the face-off circle. Pierre Engvall picked up the assist on that goal. Shortly after, the Comets solved Michael Hutchinson as Seamus Malone found the back of the net to get the home team on the board. Late in the frame, the Marlies found themselves down a man as Chris Mueller sat for two on a slashing call. The Comets opted for an additional extra man on the power play and sent Michael Leighton to the bench. Nicholas Baptiste was able to corral the puck and find the empty net to restore the Marlies’ three-goal lead. Less than a minute later, the Comets were able to capitalize on their power play to come within two with 23 seconds remaining. With 10 seconds to go, Dmytro Timashov shovelled the puck off the boards and it found its way to the empty net to seal a 5-2 victory for the Marlies.

The Marlies will be back home tomorrow to host the Laval Rocket for a 7:00PM start at Coca-Cola Coliseum.

On today’s game:
Certainly not a great display by us. We need to get points this time of the year here and luckily Hutchy was big for us when we had breakdowns and gave us a chance to hang around in the game a bit and found a way to break it open there in the third period fortunately for us. We’re going to take our two points, get on the bus and get out of here.

The Toronto Marlies will be looking to get back in the win column tonight when they take on the Utica Comets for a Friday night clash.

The Marlies suffered back-to-back losses to the Rochester Americans last weekend, falling to 35-22-7-4 on the season. Despite the losses, the Marlies have a firm hold on third place in the North Division with 81 points. The Comets will also be looking to bounce back tonight after dropping their last contest against the Syracuse Crunch. The Comets are currently out of playoff contention, but it’s not out of reach just yet as only six points separate them and the fourth place Belleville Senators.

These two teams last met back in January when the Marlies evened up the season series 2-2 following a 6-3 win on home ice. After tonight they’ll meet once more this season.

Players to watch: Jeremy Bracco sits first in league scoring with 72 points (19 goals, 53 assists) in 67 games. He has recorded a point (3-10-13) in eight consecutive games and has 23 points (five goals, 18 assists) in his last 21 games. Chris Mueller has points (10-9-19) in 12 consecutive games, currently the longest point-streak in the league.